All the versatility in the world is not going to make a DAP an interesting proposition unless it sounds good and the M11 does sound good. For my sound analysis I used a wide variety of IEMs. These included FiiO’s new hybrid flagship FH7, the TP Audio Aurora, Custom Art FIBAE Black, Dita Audio Fealty, 64 Audio Tia Trio and the Empire Ears Phantom. For music I used a very wide variety from my favorite classical music such as Beethoven and Paganini, to Dire Straits, Marvin Gaye, Aurora, Tuba Skinny (great jazz!) and of course Stormzy, among many others. Basically I just used this DAP extensively with everything I have. Unfortunately I do not have current DAPs from a similar price range available for a comparison and my impressions are relative to my usual DAPs, the slightly older Astell & Kern AK70 (mkI) and the Cowon Plenue 2. 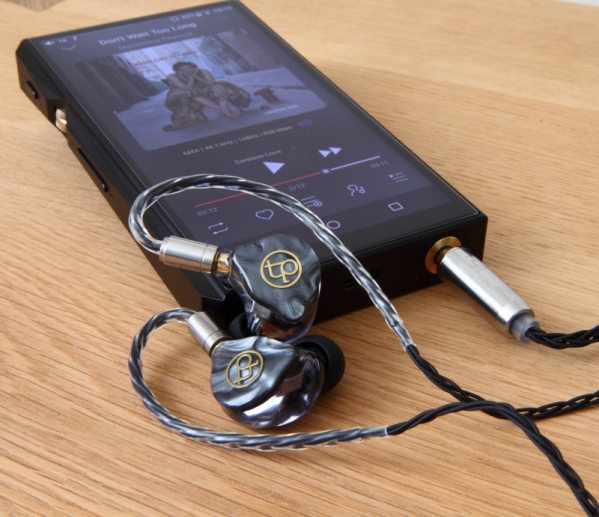 In terms of tonality the M11 has a slightly brighter tone, leaning more towards a technical rather than a natural sound. Straight away I noticed that with all my pairings the bass impact was a little less pronounced than I am used to and the treble was a bit more prominent. In terms of overall quality I feel M11 offers good sound for its price point and sits comfortably in the ‘value for money’ category. It does not quite get the transparency and natural tone I hear with the AK70, in part due to a tuning difference, and the imaging compared to the (much more expensive) P2 does not have the same precision or level of refinement, but considering the price the M11 performs well. The stage also has a good size, although not especially large, and the sound is detailed and articulate.

Despite its powerful amp, the M11 stays pretty clean. I used my Phantom to test for any background noise and was surprised that even from balanced on high gain the noise was well within acceptable limits. It was certainly there, but not that noticeable while the music was playing. Of course high gain for such sensitive IEMs is complete nonsense and on low gain noise levels were very low to inaudible.

For testing the difference between the SE and balanced out I used the Fealty with the very convenient Awesome plug that allowed me to switch between the two without the need for an additional adapter. The balanced out resulted in a larger stage with a slightly more balanced tonality because the treble was a little less bright. Transparency seemed to improve as well and I felt the image become a bit more stable and precise. Overall I considered it a notable improvement and would recommend using the balanced out if possible.

The M11 also offers another feature to improve the sound quality, namely through the ‘All to DSD’ setting. This is a function whereby the M11 scales up the PCM signal to DSD format during the digital to analogue conversion and as such will work natively on the M11 (thus also affecting third party apps). It seemed to me to make a small difference, but also came at a cost of battery life. Where I have been able to get the reported 13-hour battery life (SE, low gain), with ‘All to DSD’ activated that reduced significantly. Combined with using the balanced out, I got the impression I was burning through the battery in a matter of 5 hours or so, but did not time it precisely. It is therefore a feature that depends on your personal priorities whether or not it is worth using.

The M11 offers a whole host of connection options that I personally never use outside of WiFi, but are certainly going to be interesting for different users. One I have often seen people ask for is through the FiiO Link app that allows you to control the M11 from your phone. It is currently only supported for Android phones, but I am sure a lot of people will welcome this feature with open arms.

The M11 also offers DLNA/AirPlay, WiFi file transfer and 2-way Bluetooth. Although I don’t use these myself, I have seen people use (for instance) the 2-way Bluetooth to work around the Google Play store restrictions by using their phone to run the apps and the M11 to provide the sound.

The M11 can also function as a USB DAC, which works intuitively (basically plug-and-play) and I had no issues while using it as such while connected to my MacBook Pro.

So did the M11 manage to hypnotize digitize me? Yes, I think it did. It certainly opened up more possibilities that I would more naturally use on my DAP rather than my phone, such as streaming services, podcasts and audiobooks. So, well done FiiO for modernizing my antiquated backside.

The FiiO M11 is a highly versatile and good sounding DAP that sits firmly in the ‘value for money’ category. Its main downside is the lack of Google Play store support, which is not uncommon among Android-based DAPs. Its main strength is that the M11 is a very powerful, yet clean sounding DAP. So even if you don’t care for additional apps, the M11 is well worth a serious look as a pure DAP. Stylish looks, a large 720p screen and a responsive and smooth UI make it a pleasure to use. I can highly recommend checking it out if you have the opportunity.