Delivering the sound in a Pristine condition!

In my opinion driver number wars are almost over. Nobody really won, and instead I see more emphasis is being put into sound quality rather than continuing with a race. As a matter of fact, I’m starting to notice a new trend where some manufacturers are challenging themselves with “less is more” approach to deliver the premium performance with less drivers. One of these products came out of nowhere from a newcomer HUM, known previously for their android based Pervasion DAP, who generated quite a buzz with their Pristine in-ear monitors after the recent CanJam in SGP.

It’s a bold move to release your first IEM product with an aim at the TOTL premium market and to set a design challenge by limiting its building blocks down to only 2x BA drivers. I don’t think their intent was to re-invent the wheel, and instead they approached the design with a “pristine” idea of evaluating every single component in the chain and how it affects/contributes to an overall sound. They really did their homework and ended up acing the challenge. Now, let me share with you what I found after spending a month testing and analyzing their Reference in-ear monitor model Pristine-R (P-R).

HUM packaging is another example of common Pelican 1010 micro case with everything stuffed securely inside. The case arrived with a personalized HUM plate on the cover, and the fact that I received P-R without a single scratch speaks highly for the case durability as it traveled half way around the world. The negative of minimalistic packaging is the lack of spec or any fancy artwork, though you can always visit their website in hope to find more details. Surprisingly, HUM seems to reveal just a little bit of info while keeping you in suspense and letting your ears be the final judge of the spec. There are no secrets about the internal guts or the number of drivers since the universal fit model I received for the review had a fully transparent shell.

Obviously, the packaging with Pelican case is also part of the included accessories. Here, due to the size of the cable with 4 thick braids and a beefy plug, you need some extra room to fit everything in, and 1010 micro case is just perfect for the job, not only to protect shells but also to fit the cable. Also, included was a set of silicone hybrid eartip pairs (with red core) in S/M/L size, and a basic cleaning tool for nozzle bores. This is definitely a very basic accessories selection, limited by the room inside of the Pelican case, but I still would suggest for HUM to include more tips for universal P-R model since you can never assume that users will have extras for tip rolling. Perhaps adding foam tips and maybe a set with double/triple flange tips would be a good idea.

Overall, packaging and selection of accessories is very minimalistic, though with an exception of maybe including a few extra sets of different eartips – nothing more is needed. 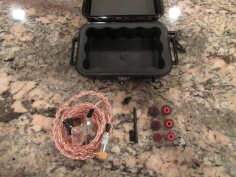 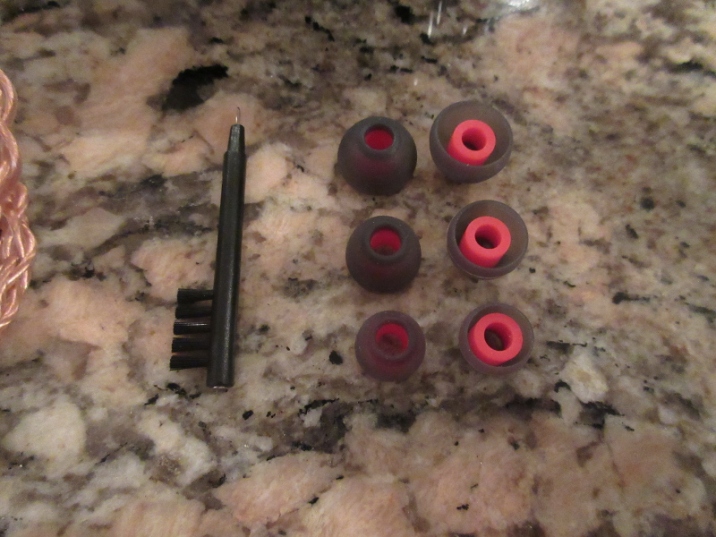 For some people the beauty of the cable is within its look, personalizing the appearance of IEM/CIEM. For me, I don’t care as much how it looks as long as it’s pliable and comfortable, neatly braided/twisted, and shows some sonic improvement. This improvement could vary from being very subtle to rather noticeable, and also depends on a pair-up and synergy with a source. In general, don’t expect a similar level of improvement from using the same cable with different pairs of headphones and sources.

While working on the design of P-R, the HUM team took under consideration every single piece of audio equation, including the custom cable (CX1 model) which comes standard with their reference monitors. They decided to go with a high purity copper Litz wires known for having one of the highest electrical conductivity property. The original CX1 cable was 0.1mm * 60 strands of pure 99.99% copper, covered by silk shielding. That made wire quite stiff after tooling which also introduced some microphonics. The new CX1 cable I received with my review unit is a modified version which has 40 instead of 60 strands sheathed by high quality Dupont TPE material which makes cable softer and more pliable.

The headphone plug was right angled heavy duty gold plated 3.5mm TRS connector with a shrink-wrapped strain relief. It’s a good connector but doesn’t have slim enough collar to be more friendly with thick smartphone cases (for example, if you choose to use P-R with your Otterbox case). All 4 braids are neatly braided and separated going down to the connector where grounds get joined (though, making it easy to re-terminate cable balanced if you choose to later). Y-splitter is a neat slim metal cylinder; looks much cleaner than a typical shrink-wrapped solution. Chin-slider is just a clear piece of a plastic tube.

Thank God there was no memory wire, and twisted pairs going to individual mmcx connectors are soft enough to stay securely behind you ears for over-ear fit, though believe it or not you can still wear P-R with wire down. HUM used high quality Amphenol RF mmcx connectors which they recommend as a preferred option when you are customizing their monitors (2pin is also available), but the connector housing is very DIY-ish, just a shrink-wrap. When you look inside of the connector/housing you can see Red/Blue color to distinguish corresponding Right/Left sides.

As much as I enjoyed the sonic characteristics of the stock pure copper CX1 cable, which imho is so FAR from being plain “stock”, I was still curious to try it with a few of my other premium mmcx cables to see if the sound will scale up.

Stock (CX1) vs ALO Litz SPC – ALO adds a little more rumble to sub-bass, lifts it up just a bit while mid-bass is unaffected. Furthermore, ALO smoothes out upper mids, making vocals a bit more organic and smoother; but it also takes away a bit of the revealing reference quality edge and reduces overall transparency. Treble becomes a bit smoother too. I also found the soundstage width improved a little bit. Even so the cable change improved bass and soundstage expansion, it took away some of the transparency and reference quality. I actually preferred going back to CX1 cable, though ALO cable looks stunning next to a clear transparent shell of Pristine.

Stock (CX1) vs Super BaX – the soundstage remained the same, but I did notice that sub-bass with Super BaX showed a little improvement with deeper impact, while at the same time I hear that mid-bass became a bit slower and more relaxed in comparison. Upper mids and treble became a little smoother and more organic, but that also took away some transparency of the sound, not as much as with ALO Litz, though. Performance of Super BaX cable was a compromise between the revealing brighter neutral sound of stock CX1 cable and smoother warmer change introduced by ALO cable. Definitely an alternative to consider if you find Pristine sound a bit too bright/revealing for your taste, but I still ended up going back to CX1.

In the intro of my review where I talked about the driver number wars, I already mentioned that HUM goal was to come up with a high resolution stage monitor design utilizing only 2x BA drivers with a 2-way crossover. Actually, it wasn’t much of a challenge but rather their belief in achieving the perfect coherency of a sound by using minimum number of drivers. Though only 2, those were carefully selected to cover the full bandwidth of frequency spectrum. Furthermore, HUM handpicked and carefully selected every single component of the design, from using brand name Vishay MELF resistors with a tight tolerance (resulting in more precise crossover point), to using a rather rare for IEM design electrolytic capacitors (with brand labeling stripped?) which intended to be more stable over the time/temperature. Even the internal wires connecting drivers, crossover components, and premium Amphenol RF brand name mmcx connectors were all 99.99% pure copper Litz wires, the same as a cable. I believe, they also used premium lead free solder. No expenses were spared, only the highest quality components were used.

The P-R is available in both universal and custom fit where you can customize the shell and the faceplate color, add faceplate artwork, and even choose connector type (though HUM has a preference for mmcx). In my opinion the best design to showcase the inner beauty of these monitors has to be the transparent acrylic shell which like a glass capsule reveals every component inside. The shell finish is very smooth, high quality, faceplate attachment is seamless, and I like the integrated look of the mmcx round connector where nothing sticks out or exposed out of the shell. Inside, you can clearly see 2x BA drivers, and a cylindrical electrolytic cap which is as big as the driver itself. There are also some discrete crossover components, and multi-strand thick litz copper wires. Nozzle has just a perfect length and you can see two bores connected to each driver. Due to a slightly thicker nature of the nozzle, I had no issue trying different eartips where they always stayed tight and secure.

The only thing I had a bit of a problem with was a lack of L/R marking. Since the shell design is not exactly symmetric, you can still figure out which one is left or right, but at a glance sometime it’s not that obvious since neither shells nor cables are marked. It’s not a show stopper, but I wish HUM would come up with some way to distinguish the sides, perhaps on the cable side. Regarding the actual fit, though preferred way would be with a wire over your ears (for a more comfortable and secure fit), I found it to work with a wire down too, still providing a good fit and a decent isolation. 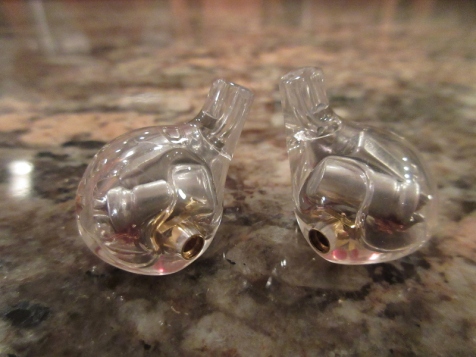 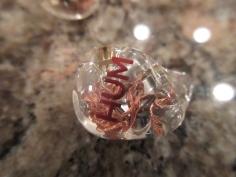