Being quite familiar with audio performance of AK4490 DACs, I already expected to hear a smooth musical sound with a neutral-warm tonality and a laid-back presentation.  And that’s exactly how I hear X5iii DAP.  The signature is neutral with a noticeably warmish tilt.  I do hear a slightly rolled off treble which in a way reduces the airiness and layering of the sound.

Overall sound presentation is a little laid back, not as aggressive, with above the average soundstage which is not very wide.  While going from 3.5mm SE to 2.5mm BAL you do gain a little bit of soundstage width and some subtle improvement related to a blacker background, but everything else remained nearly identical and to my surprise I didn’t hear too much improvement in output power.  For me personally, I found the benefit of using 2.5mm BAL output for convenience since I have a lot of balanced terminated cables.

In the initial firmware release when I received X5iii, the sound had a flatter dynamics and not as good layering and separation between instruments and vocals.  Now, with fw 1.1.4, I’m hearing an improvement, but it’s still not a huge leap forward.  At first this made me wonder why is FiiO holding back, considering they know how to get the sound right, going by X7 with AM3 which had an impressive quality.  But then I realized, that is exactly the reason.  Why would they make a mid-fi X5iii model to sound as good or even better than a flagship X7?  I think it all goes back to my original thought in the intro of this review, X5iii looks like a flagship, but it’s not intended to sound like one. 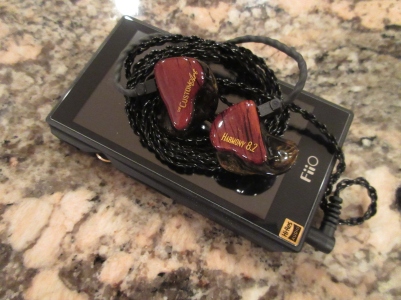 While comparing to X5iii, I did find several other DAPs to have an edge in dynamics and layering/separation in sound.  In many cases, it wasn’t exactly night and day difference, but the problem is that I only used 3.5mm SE HO, and some DAPs have a noticeable sound improvement when switching to 2.5mm BAL output (if they support it).  As I mentioned already, X5iii BAL sounds very similar to its SE, thus if I compare X5iii SE to BAL of other DAPs – the gap can widen further.  So please keep in mind that the following impressions were taken using only 3.5mm HO in every comparison, along with UERR as my neutral monitor for sound evaluation.

X5iii vs X5ii – very similar soundstage expansion.  5ii tonality is a little more neutral, relatively brighter, while 5iii is relatively warmer, with more body, more musical, and smoother.  5ii sounds more transparent, with better layering while 5iii has a thicker sound presentation, not as layered, and not as dynamic.

X5iii vs X7 w/AM3 – similar soundstage, maybe with X7 being a little wider (AM3 balanced out has improvement).  Also, X7 tonality is more neutral, more revealing, more detailed, with a better layering and transparency, while X5iii is warmer and with a little more body in comparison, not as dynamic or layered, and a little flatter (more compressed) in comparison.

X5iii vs Opus#1 – very similar soundstage, with #1 being a little wider.  The tonality is nearly identical, both being smoother, musical, with an equal retrieval of details.  Opus#1 sound is a little more dynamic, but otherwise they are similar.

X5iii vs Plenue M2 – very similar soundstage expansion.  Also, very similar tonality, being smoother, musical, with a similar retrieval of details.  PM2 has a touch more transparency in sound, but overall, they are very similar.

X5iii vs i5 – i5 has a little wider soundstage.  i5 tonality it a little brighter (more neutral), with more airiness, tighter bass and crisper treble.  In comparison, X5 sounds a little warmer, smoother.  Also, because of more airiness and slightly better transparency, I hear improved layering and separation in i5 over X5.

X5iii vs L&P L3 Pro – very similar soundstage expansion.  L3Pro tonality is a little brighter (more neutral), with more airiness, better transparency, along with layering and separation of the sound, and crisper treble.  In comparison, X5 sounds a touch more compressed and smoother, and with more organic tonality.

X5iii vs DX200 – DX200 has a wider staging, a brighter tonality (more neutral, reference quality), more airiness and treble crispness, and improved layering and separation of the sound.  X5 is smoother and not as dynamic in comparison.

X5iii vs Opus#2 – #2 has a little wider soundstage, similar tonality, though just a touch brighter in comparison, including a crisper and more airy treble.  In comparison #2 has better dynamics, better resolution, and improved layering and separation of the sound, where X5 is a touch smoother and flatter (dynamics of the sound) in comparison.

I know it’s not fair to compare mid-fi X5iii to some of the summit-fi performers, but I just wanted to point out that in no way some of its technical limitation makes it an inferior DAP.  Many people take my comparison notes in a negative way, thinking that I saying “one is better than the other”.  I’ve talked to many people who prefer a neutral-warmish source to balance out their bright/revealing headphones in order to find a happy medium of musicality and resolution, and X5iii is perfect for that.

During this testing, I kept X5iii in Low Gain, and noted the volume level (in “()”) in every case which should be useful for a relative comparison.  I also noted next to each pair up test a unique design features of headphones under the test.  One thing to mention, X5iii has a noticeable hissing with sensitive IEMs, but it’s on par with some other DAPs, like LPG.

EL-8C (93) planar magnetic – nicely expanded soundstage, both width and depth, balanced detailed sound with mids being slightly more forward, sub-bass has a nice rumble and mid-bass has a little above the neutral level of punch quantity, lower mids are neutral, upper mids are detailed, revealing, layered, and treble is crisp and with plenty of airiness – no hint of metallic sheen.  I was expecting this to be a great pair up due to a brighter sig of EL8C and it didn’t disappoint.

Other wired and wireless connections.

The flexibility of X5iii design with so many output ports makes this DAP a perfect candidate for a pair up with various amps, DACs, and other external setups.  While it’s convenient to have one compact device without a bulk of a stack up, if you want to scale up the sound quality, you have plenty of options to experiment with.

X5iii vs X5iii w/A5 with T5p2 – I always held E12A amp in high regard as a transparent neutral portable amp.  Its replacement, A5, doubles the power and adds a little more body to the mids, though I still consider it to be relatively neutral.  In testing X5iii 3.5mm HO vs X5iii LO + A5, I can clearly hear an improvement in sound being more dynamic, better layered, with more separation between instruments, and improved transparency.  This testing gave me a Eureka moment once I realized that the only thing that holding X5iii back in the mid-fi bracket is its headphone amplifier section of the design.

To confirm this theory, I tested X5iii with K5 docking station to evaluate the sound using this external desktop headphone amplifier.  And again, I was presented with a clean, dynamic, layered sound that was a pleasure to listen to.  That felt almost like an experience with X7 when I stepped through the original default AM1, switching to AM2, only to discover later the best sound combo with AM3.  You can’t roll X5iii amps like in X7, but you can certainly take the advantage of its neutral clean LO output of dual AK4490 DACs to add your own external amp to the sound chain.  And if you want to use your own DAC/amp, Coax Out turns X5iii into a digital transport which I successfully tested with my Micro iDSD to find a clean warm sound.  I’m sure, if X5iii would have supported optical out, the sound would have been more neutral, just based on my experience of Micro iDSD use.

If you want more controls, you can use 3.5mm HO with your headphones w/in-line remote since FiiO supports CTIA connection to enable playback controls from your headphone’s remote.  The pair up with FiiO new F5 iems was really good. 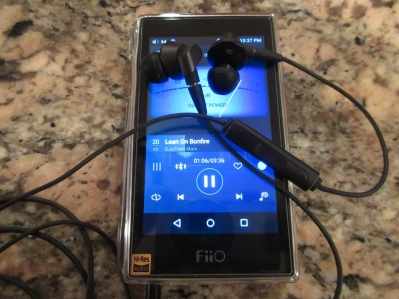 If you want to cut down the wires all together, go for Bluetooth wireless connection with an available aptX codec support.  The pair up was fast and easy, and the sound quality was no different than with my smartphone w/aptX.

And of course, WiFi support is not only convenient for download of over-the-air (OTA) firmware updates, but also tap into unlimited streaming resources from services like Spotify (using a free version of it, I have no complaints) or watching the latest videos on YouTube.  One app I could get to start but without a success of running it was Netflix.  I tried it on a few different occasions, and get an error when streaming starts.  I need to investigate it further. 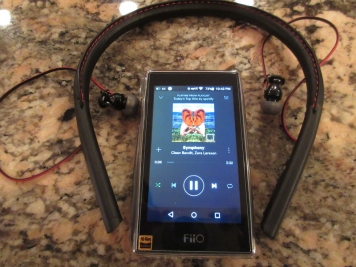 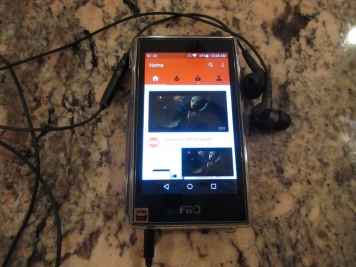 Also, I’m still investigating FiiO’s USB DAC driver compatibility with my Win7 machine.  All my laptops still run Win7 home edition which has several security limitations, blocking the install of unsigned drivers.  FiiO even acknowledged that in their installation manual as a potential problem, offering various solutions how to bypass this limitation, but I had no success.  I can connect X5iii to my laptop, it switches to USB DAC mode, but my laptop gives me a headache since driver is not digitally signed.  I have the same issue with many other DAPs.

To be honest, I got off on a “wrong foot” with X5iii.  When you look at its slick design, the complete list of features, dual OS mode (Android and Pure Music), all the available ports, and premium accessories – you forget it’s just a $399 mid-fi device and almost expect it to sound like a TOTL flagship DAP.  But once you start listening, you get a reality check that it doesn’t sound like other TOTL flagships.  Just think about it, no company in their right mind would design a mid-fi DAP to kill the sales of their flagship.  It’s a great consumer product for those who want to give their smartphone a break with an upgraded sound or would like an Android “player” alternative to their iPod Touch.  And if you want to scale the sound to a higher level, X5iii dual DAC implementation is perfect for your external portable amp on the go or while docked with their excellent K5 head-amp for a desktop use.

Overall, X5iii came a long way from its original X5 introduction.  It offers a full Android experience with a touch interface and access to Google Play store, OTA fw updates, hw playback control and analog volume wheel, premium accessories (tempered glass and two cases), plenty of storage with 2x microSD cards, dual DAC architecture, LO and Coax digital out, and both 3.5mm SE and 2.5mm BAL outputs depending on which cable you want to use.  The sound is still very good for a mid-fi level DAP with a musically-smooth clear tonality and just enough headroom for improvement to whet your appetite in time for the upcoming X7ii.  All this for under $400 is impressive, especially if you are after extra storage for your music library and require access to WiFi Streaming services.

Available for sale on Amazon.