Changes under the Skin!

For those familiar with my long review format, I promise you this write up about Plenue 2 Mark II (P2mk2) is going to be shorter. If you want to find out more about the design, the inner guts, the GUI, the sound, and the pair up and comparison, please read my original Cowon Plenue 2 review which is still applicable. While many were waiting and hoping for Plenue S2 release, Cowon surprised us again with P2mk2. And even bigger surprise came when Cowon announced Mark II version instead of Plenue 3, in my opinion the right decision because this 2nd gen kept the original design and all the key elements intact. Instead, Cowon decided to supercharge P2 with more enhancements under its skin, including the skin itself. These enhancements and the comparison to the original P2 model will be the focus of my review. So, let’s proceed!

As I already mentioned, there is a good reason why Cowon decided to name this release MK II instead of P3, because this is an upgrade rather than an updated design. Thus, you should expect an identical form factor with the same dimensions, the same weight, 2 wheels at the top (volume and assignable multi-function), the same high end AK4497EQ dac, 3.7″ AMOLED touch display, single uSD card expansion, and the same GUI with JetEffect DSP effects. That’s a reason why my Plenue 2 review is still relevant if you want to learn about this DAP and its functionality. But, at the same time, the changes are quite noticeable and impressive. Here is a rundown. 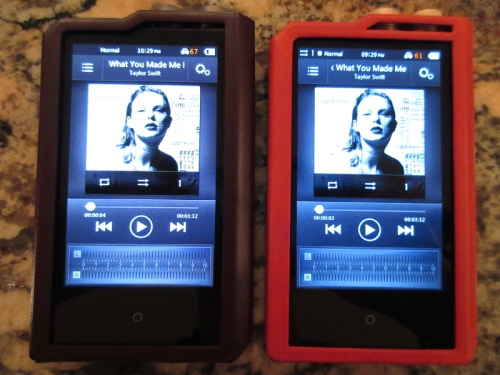 While many manufacturers are providing their own leather/pleather cases, either included stock or optional, majority of these are not the highest quality. Cowon Plenue cases were always an exception, optional with lower end models and included with higher end. As a matter of fact, I loved the leather case included with P2 and found it to be of a very high quality. The only complaint was the buttons on the left side that had a shallow imprint in leather, not easy to feel when you slide your finger across. But in general, it would be hard to top it, unless we are talking about something from Dignis. And that’s exactly what Cowon decided to do, go straight for the best and include their custom case with MK II upgrade.

This Dignis case uses a genuine Italian Minerva leather, and while I’m not a leather expert, I can certainly feel the difference in comparison to P2 case and appreciate its softer to the touch material. The case is made of red leather, which goes well with a new P2mk2 color. It has an open top where the DAP slides in, and a generous opening for micro-usb and HO ports at the bottom, similar to the original case. uSD card can’t be accessed unless you take the DAP out. There is also a cutout window underneath the knobs to reveal LED lights. Original case had that area open, while Dignis created a neat cutout to bring more attention to those LEDs.

The biggest change in this Dignis case are covered buttons shape and the pattern on the back. Power button has a round imprinted shape with a symbol that is much easier to feel. Playback buttons are square, with Play/Pause in the middle that sticks out a little more and makes it easier for a blind ID when you slide your finger. On the back, they have a cutout with a recessed metal right-angle insert, creating a 3D effect pattern. While the metal insert has a stainless steel finish, the reflection of red leather adds a shade that resembles new P2mk2 color. Just one comment, while it creates a cool effect, the recessed nature of that pattern cutout will end up collecting dust/lint when placed in the pocket. 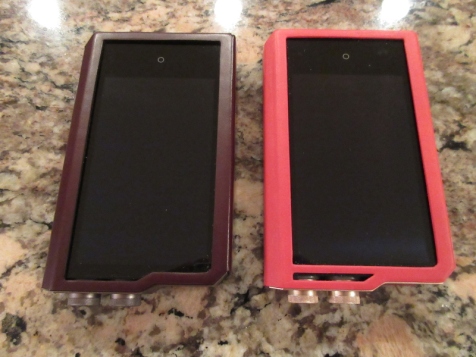 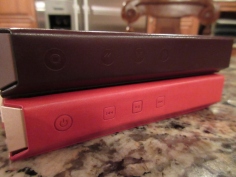 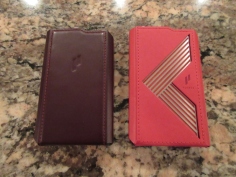 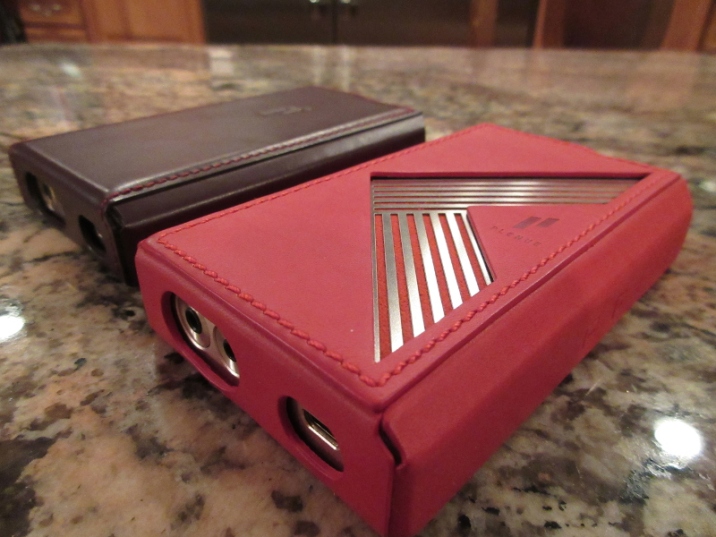 In addition to a new case, P2mk2 also updated the metal chassis color, going from Imperial Silver to Jupiter Gold. The original Imperial Silver was more of a darker bronze-ish shade, while Jupiter Gold has a distinct color with a slightly rose-gold tint (rather than a traditional yellow gold). Personally, I’m not too picky about colors, but I do like the idea of a different color from P2 to distinguish otherwise similarly looking DAPs. Plus, this new color looks great with a red leather case. Also, unlike other DAP brands, this is just an aesthetic color change, not a different material with an added weight or claims of enhanced sound due to a change of material/color. 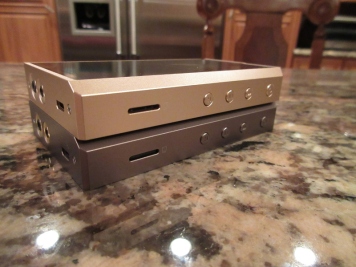 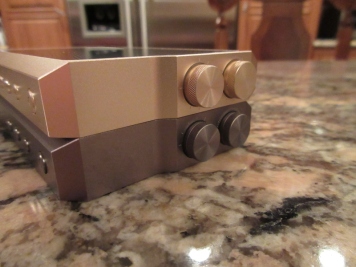 While the case and the color changes are purely visual, though the case enhances functionality with improved button cover shapes, the first big noticeable change is doubling of the internal storage from 128GB to 256GB. Cowon was always generous, offering internal storage of 128GB in both mid-fi and high end Plenue DAPs. But now they stepped it up to a flagship level of Sony and A&K with a bump to 256GB. In addition to uSD card expansion, supporting another 256GB where I’m sure the latest 400GB is not a problem, this adds up to a nice chunk of storage space which is important for high res DAP if you have a library with FLAC and DSD files. 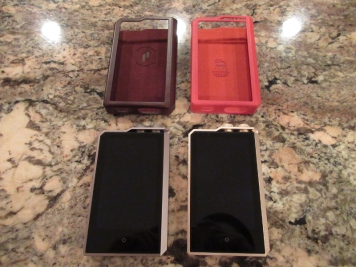 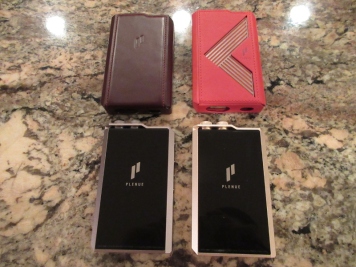 According to Cowon, P2mk2 version was optimized to offer an improved battery performance with additional 1.5hrs of playback. That’s pretty good considering we are still talking about touchscreen DAP with a decent power spec, even higher in MK II model. In my battery test, I usually start with multiple charge/discharge cycles for a proper calibration, and then go for the best-case scenario with mp3 playback in the loop and occasional display on. In this test, I was able to get 10hrs and 15min of playback time, which is close to Cowon 10.5hrs spec. With a higher res FLAC, you lose about 30-45min. Though this battery performance is still average, not as high as Plenue R, the important factor here is that Cowon optimized the performance and improved battery life in comparison to the original P2 where I measured under the same conditions only 9hrs and 20min. 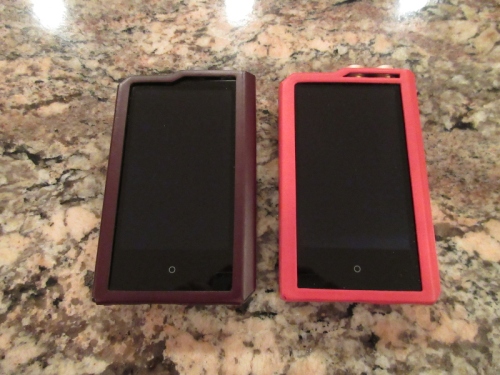 While there was a subtle difference between SE and BAL outputs in P2, I found its single ended (3.5mm) and balanced (2.5mm) ports to be convenient for people who have headphones and cables with both terminations. I don’t think Cowon took full advantage of balanced architecture in P2 design, but they certainly corrected that in P2mk2. Despite battery optimization to give you more playback time, they actually increased BAL output from 2Vrms to 3.24Vrms. Only hte BAL output was changed, while SE remained at the 2Vrms.

If you do rough calculation to covert these numbers into power with 32 ohm load, you will see that output went from 125mW (2Vrms) to 328mW (3.24Vrms). The difference is actually noticeable when you test with different IEMs. When listening to the same song with the same pair of iems, the same gain, and the same overall setting, I was able to lower the volume in P2mk2 by about 7-8 clicks, making its BAL output more efficient. From SE output, the volume was identical between P2 and P2mk2.

Higher power means better efficiency where you don’t need to push volume as high, giving you more headroom before the sound starts to distort. It also means better synergy with some more demanding headphones. I’m more into a portable audio setup, don’t have as many demanding high impedance cans, but there are a few that can benefit from extra power. If you look at my original P2 review and some of the pair ups, I had to push 470 ohm open back ATH-R70x over 107 in volume. The same with 320 ohm VE ZEN earbuds and planar magnetic EL8C cans, pushing around 100 clicks in volume. With P2mk2, I gained extra margin, which is a bonus. 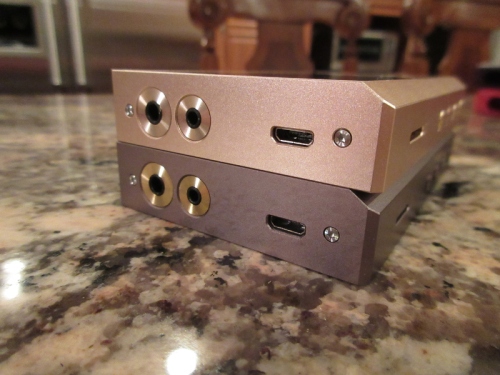