The Next Golden Step.

I usually don’t write mini-reviews or impressions dedicated to firmware updates, but this is a unique case and a rather important update in my opinion.  Sony doesn’t release FW updates as often because they have plenty of R&D and SW resources to test their firmware for any bugs prior to releases.  Instead, their updates are usually more significant with addition of new functionality which gets many people’s attention.

This particular update is targeted toward WM1Z and WM1A DAPs, and I will talk about my experience of updating WM1Z firmware from 2.0 to 3.0 and all the new functionality along with corresponding sound analysis as I hear it.  This is not a review of WM1Z, I already covered this DAP in depth when I reviewed it here.  The focus of this write up is on changes from FW2.0 to FW3.0 which is available (new firmware) for download here.

After the fw update, I went back’n’forth multiple times to compare the sound since you can downgrade firmware to previous versions.  The update takes about 2min which I find to be sufficient for a relatively accurate A/B comparison.  In my testing, I was using 64 Audio U18t with EA Horus cable (2.5mm terminated) and EA P-EA 4.4mm adapter.  The same volume level was used between fw updates, and I played the same set of test songs, with the only variable being a new firmware in my testing.

While WM1A gets the same FW update, in this write up I’m only talking about WM1Z which has a different sound characteristics in comparison to WM1A. 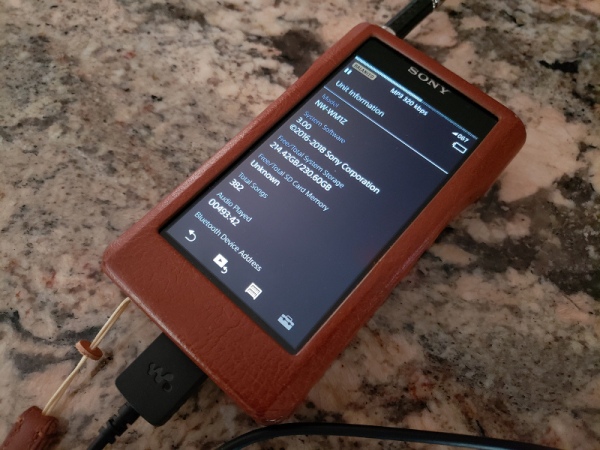 I will cover all these changes, except for the cover art. 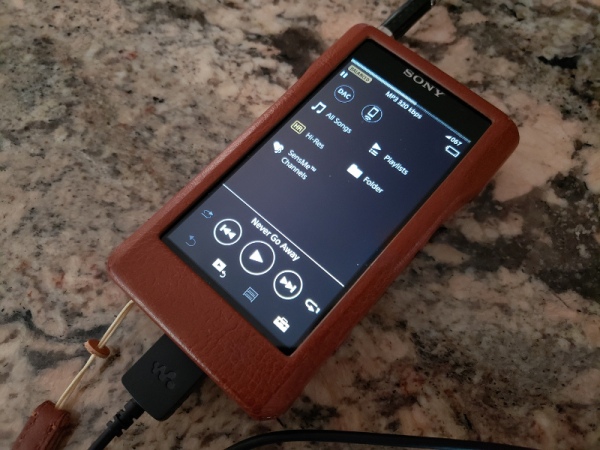 Though many people prefer to use a dedicated USB DAC, for convenience, especially while traveling, sometimes it’s easier to use your DAP if it supports this functionality.  Now, WM1Z/A has it enabled and can be used as USB DAC with your computer.  And it’s not just limited to computer, but I also had no issues using WM1Z as USB OTG DAC connected to my Galaxy S9 phone, meaning I can play audio and stream apps from my phone connected to WM1Z.

First of all, I didn’t need to install any drivers on my Win7 laptop (ThinkPad T430s).  Once connected, Windows downloaded and installed all the necessary drivers automatically.  I did have a little hiccup at the beginning, but resolved the problem once I disabled on WM1Z “auto activate usb mass storage”.  If you have issues with connection, Sony offers a separate download with USB Audio Drivers for Windows 7, Windows 8.1, and Windows 10 here.

When playing the same song from internal WM1Z storage and from my laptop using WM1Z as USB DAC, I didn’t hear any difference in sound quality.  Also, I was pleased that I can control volume from WM1Z directly since it’s easier to reach DAP in front of you.  But the best part, I was still able to use all the Sound effects such as EQ, DSEE HX, DC Phase Linearizer, Dynamic Normalizer, and the new Vinyl Processor while using WM1Z as USB DAC and USB OTG DAC with my laptop and my smartphone. 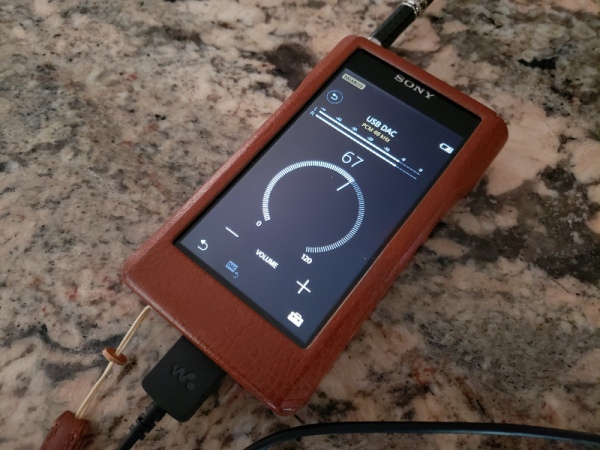 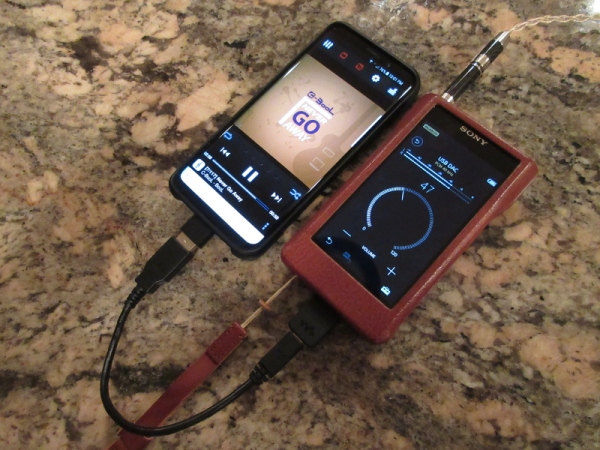 According to Sony, Vinyl Processor “recreates the warm, rich playback of a record on a turntable.”  Once you go to the screen for this effect, you will see an image of turntable and a drop down box with 4 types of the effects, Standard, Arm Resonance, Turntable Resonance, and Surface Noise.  I have no experience with turntables thus not really sure how this is related to the actual hardware units.  All I can do is to share with you how I hear these effects.  I don’t expect everybody to hear exactly the same, and I’m sure for some it will be more subtle. 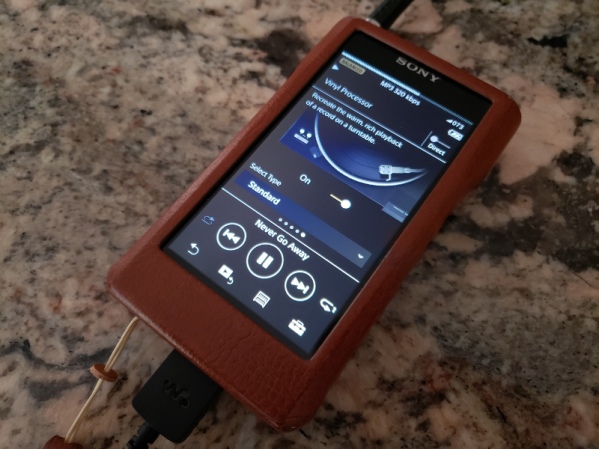 Standard – I hear the sound of upper mids and treble remaining the same, while lower mids get more body, becoming fuller and a little warmer.  It’s not an extreme change, more subtle, but noticeable to my ears when I shift my listening focus to lower frequencies.

Arm Resonance – I hear it very similar to Standard, but now the sound becomes a bit jittery.  Also, I’m hearing the sound to have a slower attack, being a little more relaxed, laid back.

Surface Noise – I hear it similar to Standard but with more warmth, and also making bass attack a little slower.

The common change I hear among all 4 types of Vinyl Processor effects is addition of some warmth and body which takes away from sound transparency, giving the sound more analog flavor. 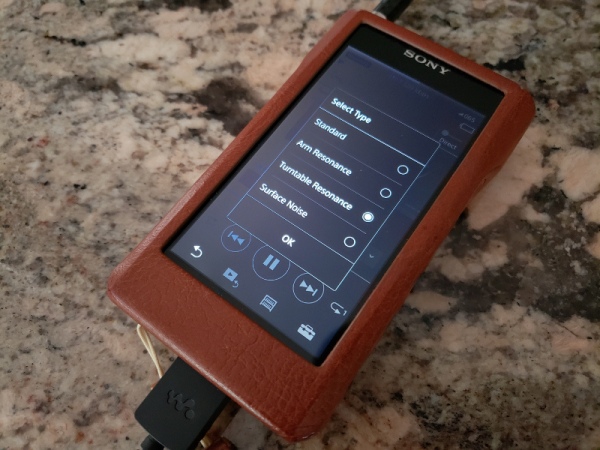 While USB DAC functionality turns WM1Z/A into a wired DAC, BT Receiver turns WM1Z/A into Bluetooth Wireless DAC.  Using it the first time requires to enter pairing from WM1Z and then scanning from your smartphone to find the DAP. 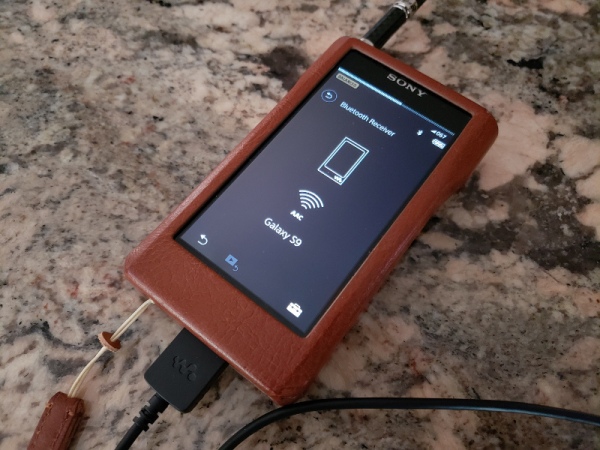 I had no issues connecting to my Galaxy S9, pair up was fast and hassle free.  After the initial pair up, the next time just turn BT Rx link on (on WM1Z), you have to go to your smartphone and tap on WM1Z name from the list of paired devices to establish the connection. 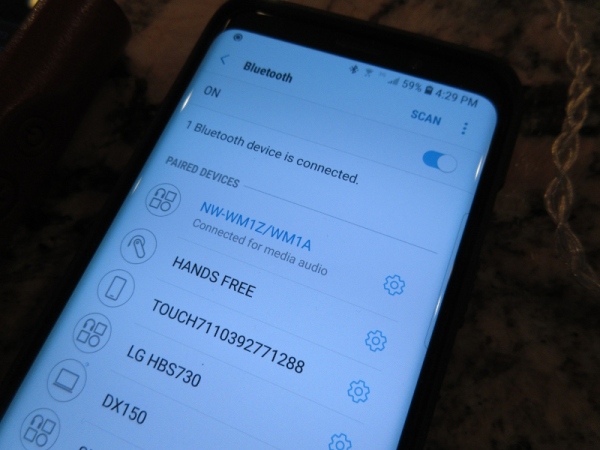 Once paired up, you can play from any audio app or streaming up; you can even play YouTube videos or movies.  You can control the volume from either your smartphone or WM1Z/A.  And you can use all the Sound Effects just like you would in USB DAC mode.  To my ears the sound quality was close to USB DAC, but not exactly the same.  Now you are relying on wireless BT encoding/decoding and I felt like a bit of resolution was lost (but not too bad).  At the same time, you are gaining the convenience of wireless connection.

When I looked closer, I realized that original pair up was using AAC protocol.  My Galaxy S9 supports LDAC encoding, and I made sure to enable it under pair up setting with WM1Z.  Once I switched from AAC to LDAC, the resolution was back to wired USB DAC performance, though tonality was just a touch warmer. 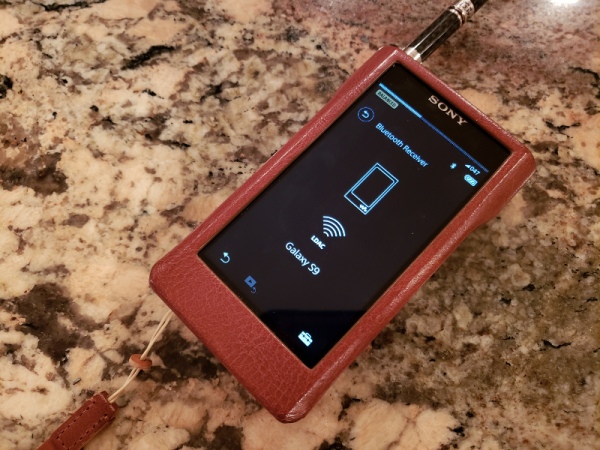 While not exactly a new functionality, it adds a nice touch to the playback screen, making it look more professional, like you are dealing with a studio equipment.  Nothing much to say here except I enabled it and have no intention of turning it off.  Great visual effect. 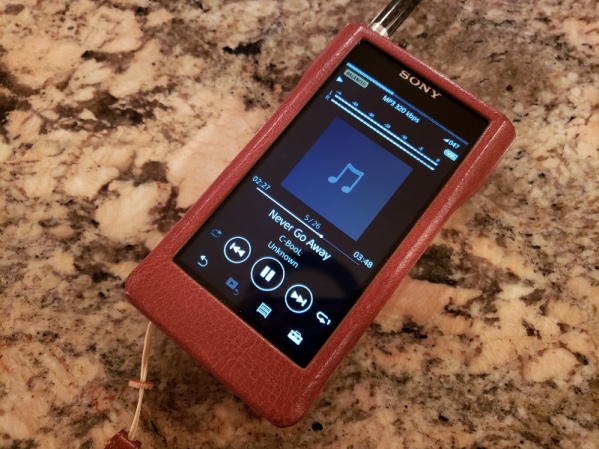 For anybody who is familiar with previous FW1.2 and FW2.0, you probably remember there were some sound changes between updates.  Officially, no manufacturer ever admits that fw updates should introduce changes in sound, but I personally do hear it, and ended up going back’n’forth multiple times between FW2.0 and FW3.0 to document it below.

The first obvious change is the width of the soundstage which becomes wider in FW3.0.  If you are using a set of high res IEMs or headphones that can reproduce a good soundstage and imaging, this effect is not subtle and quite noticeable.  Other changes I hear is a little less sub-bass rumble, making bass more balanced, and a little more sparkle in treble which adds more airiness to the sound.  The changes in tonality are more subtle, but still noticeable when I’m listening with 64 Audio U18t monitors.

Also, after the FW3.0 update, I compared again the BAL 4.4mm and SE 3.5mm headphone outputs, and BAL output is still wider in soundstage expansion and has more transparency and better resolution.  I wouldn’t call 3.5mm output narrow, but it sounds more focused vs 4.4mm being more expanded.

Every time a company releases a new fw, especially with big changes, you hear people asking if they should update.  As a reviewer I get a chance to test many products, and often updates are necessary because they address various bug fixes and improvements.  With companies like Sony and Astell & Kern who have a lot more SW resources, you will find less updates related to bug fixes and more updates related to enhancements and new features.  This FW3.0 is exactly that, a collection of new features that take this DAP to another level.  Definitely a must have update!