CONS: removed optical out, 128GB internal storage (down from 256GB).

The product was provided to me on loan by Astell & Kern for the review purpose in exchange for my honest opinion.

Just when you thought Astell & Kern were done for this year with new DAP models and everything is finalized with flagship A&ultima (SP1000 SS/CU), mid-fi A&futura (SE100), and entry A&norma (SR15), A&K throws us a curveball with a brand new SP1000M which came out of the blue, no pun intended since the color of this DAP is actually lapis blue.  And to an even bigger surprise, they took key components of SPK, including dual flagship AKM DAC and Exynos octa-core processor, and packed it into a smaller and lighter aluminum chassis while dropping the price by 30%.

But first, before I go into more details including the comparison to the original SPK, let me calm down all the current A&ultima flagship owners – there is NO NEED to panic!  Your SP1000 SS/CU is not obsolete and still very much relevant, especially after the recent FW 1.10 update where Open APP Service was added just like in SPKM.  But, if you have been narrowing down the available flagship DAP choices and had your eyes on SPK, the option of SPKM shouldn’t be ignored.

Due to similarities in GUI, comparison to other DAPs, and pair-ups with headphones which I have already covered in my SPK SS/CU review, I’m not going to repeat it again here.  You are welcome to read that review separately because the focus of this shorter write up will be strictly on the comparison between SPKM (SP1000M) and SPK (SP1000SS).

With a noticeable price difference, you have to cut corners somewhere, and it begins with unboxing where instead of a solid wood storage box of SPK, the SPKM arrived in a sturdy cardboard box inside of a blue sleeve, just like a color theme of the new DAP.  Also, I didn’t find A-pin which SPK included for microSD card tray.  Made sense after the further examination of SPKM since it has a spring loaded microSD (not a tray which requires a pin).  Other than that, you still find 2 sets of screen protectors, nice quality thicker USB-C cable for fast charging and data transfer, and a premium black soft real leather case. 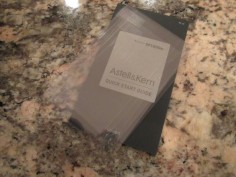 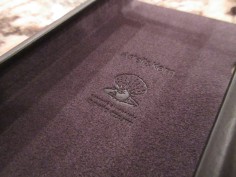 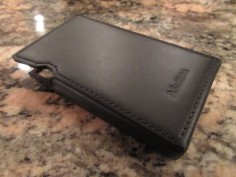 If you want an alternative case with a slimmer color matching option, MITER also released their SPKM case, available on Amazon now.  As usual, even for just an accessory, MITER packs it in a nice gift box and a protective sleeve. 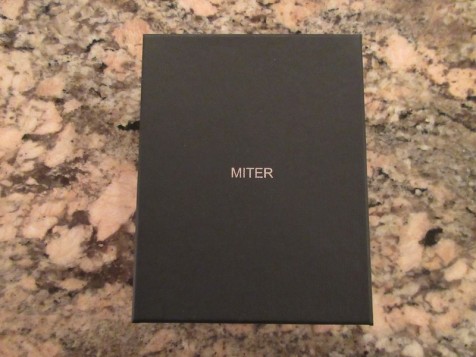 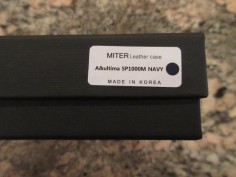 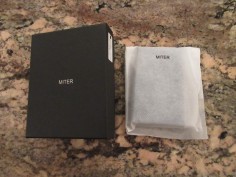 MITER case is slimmer than A&K stock case, and I like the idea of a blue matching color.  The leather is soft to the touch, has a generous USB-C port opening at the bottom, and fully exposed top for easy access to the ports and the volume wheel.  Buttons (Plays/Pause/Skip) are covered and have a nice indent to outline their shape.  Also, this case comes with MITER signature magnetic kick-stand which is very slim and doesn’t add too much of extra thickness on the back. 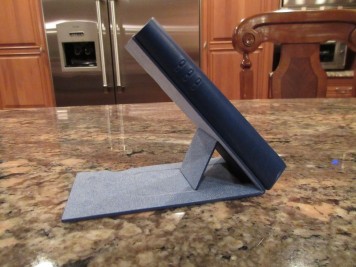 Right out of the box you quickly realize how much smaller and lighter SPKM is relative to SPK.  With dimensions of 67.9mm x 117mm x 16.9mm and weight of 203g, SPKM is more compact relative to SPK with 75.8mm x 132mm x 16.2mm and weight of 388g (SS) or 418g (CU).  Smaller size also means smaller LCD display, going down to 4.1″ from 5″, though touchscreen resolution remains the same, 720×1280.  Now, I can easily use it in one hand where my thumb can reach across the entire screen, like going from the newer iPhone to iPhone SE.  Also, smaller size, smaller display, and use of aluminum chassis results in a reduced weight by almost a half. 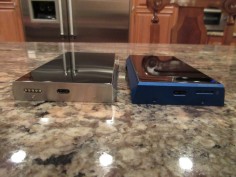 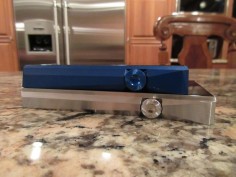 Other than a scaled down dimensions, overall exterior design is very similar with only a few noticeable changes.  The bottom of the DAP still has USB-C port in the middle, but the 5-pin connector to the left of USB-C in SPK (for external amp mating) is no longer there in SPKM.  Instead, SPKM has a spring loaded microSD card port to the right of the USB-C.  With M intended for a mobile/portable use, the assumption here is that users won’t be looking for an external amp stack up to make the DAP bulkier.

On the right side you will still find a volume wheel, resembling a watch crown, with a nice tactile click response as you turn it.  But in SPKM it’s just a volume wheel, no longer a power push button.  That’s when I quickly realized how much I got spoiled by SPK where you can turn the screen on/off by pushing the volume wheel, while in SPKM you have a separate power button at the top and the volume wheel is just for volume adjustment.

At the top, you still have your 3.5mm TRS single ended and 2.5mm TRRS balanced headphone ports, except SPKM no longer has a shared optical digital output with 3.5mm headphone port.  This means you no longer have optical digital out to drive external DAC/amp, but you can still use USB-C digital out (USB OTG), turning SPKM into a transport which I have verified with Micro iDSD BL dac/amp.  And as mentioned already, while SPK has a microSD card tray in the right corner on the top, SPKM moved microSD to the bottom and has a separate power button used for power on/off and screen on/off.

The left side has transport control buttons with Play/Pause in the middle and Skip buttons on each side.  Here the buttons are different from SPK, looking exactly like in SE100.  Those are unlabeled narrow rectangular buttons, spaced close to each other, and raised higher for an easier “blind” id.  Unlike SPK where you have 3 round buttons with Play/Pause in the middle with id bump, these SPKM buttons are spaced a bit too close.  I’m sure majority will be using SPKM in its provided stock leather case, and the case itself has these buttons covered and imprinted with corresponding labels.  Still, even the imprint is not that well defined, but I don’t consider it a show stopper because I’m sure either Dignis or MITER will probably have their custom cases in a near future. 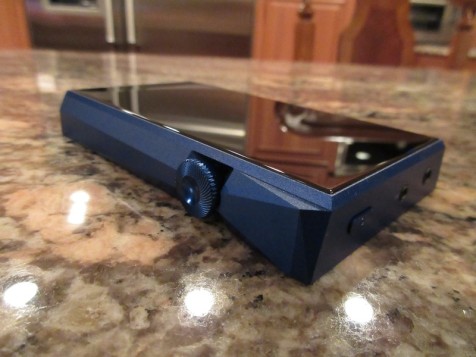 The “under-the-hood” spec was of a high interest to me because it’s a physically smaller device, making me wonder what’s in and what’s out.  To my surprise, SPKM still has a dual (2x) AKM AK4497EQ DAC, Exynos 74200 Octa-Core CPU, support of BT v4.1 with aptX HD codec, USB type-C with fast charging, and a single microSD card.  The core of the design was still there, but there are some other differences.

The one I mentioned already is a reduction in display size, going from 5″ to 4.1″ – still large enough and easy to read with the same 720×1280 touchscreen resolution, though SPK display is a little brighter.  Chassis are aluminum now, in comparison to stainless steel or copper chassis of SPK, making SPKM lighter.  Internal storage is reduced from 256GB to 128GB – not the end of the world considering the available streaming options and microSD card capacity going up.  Keep in mind, once you install Tidal (not the custom one which comes preinstalled with A&K DAPs) and Spotify apps, you have an option for off-line storage to either internal or external memory.

Battery size was also reduced, from 3,700mAh to 3,300mAh – resulting in battery life to go down from 12hrs to 10hrs, which I have verified with SE output, 75/150, playing a mix of mp3/flac files.  Another change, according to the spec, is SPK SE (3.5mm) 2.2Vrms and BAL (2.5mm) 3.9Vrms while SPKM SE 2.1Vrms and BAL 4.2Vrms – the higher voltage/power of BAL output is noticeable in comparison where I needed to reduce a volume by about 3 clicks.  Also, from SPKM spec, it gained 1dB of SNR, going from 122dB to 123dB – the background is still black, and this particular improvement would be hard to hear anyway.

Other changes I’ve already mentioned about were No optical output and No external amp docking with SPKM, which makes sense since M-model is designed for a portable use.  If you want to use your A&K flagship DAP with their own external amp dock (if one ever going to be designed for A&ultima), then you need to look into SPK.