Last weekend I attended my 3rd CanJam NYC audio show, annual event produced by Head-Fi.org which now covers NYC, Singapore, SoCal, London, RMAF, and Shanghai locations.  The show gets bigger and better every year, with more companies presenting their latest products, more audio enthusiasts gathering around the tables to audition it, and more educational seminars throughout the day.  In comparison to my previous 2017 and 2018 CanJams, this year the showroom was packed nearly to the max with hundreds of people in attendance, more than I recall it from my last two visits.

This event is typically held on the weekend, Saturday and Sunday, and if you want to try most of the products, you need to plan on attending both days.  The last two times being there on Saturday only, I got overwhelmed with too many products and spent a lot of time talking to manufacturers.  One day is just not enough.  Unfortunately, this year I was also only able to attend on Saturday, but came prepared with a list of products I wanted to hear.  But no matter how well you think you are prepared, you still feel like a kid in a candy store with your head spinning around.

The CanJam NYC show is held in the heart of NYC; Marriott Marquis Hotel is located in Time Square of Manhattan.  I usually drive to Manhattan and park across Time Square in the garage.  Since this is one of the hottest tourist attractions, on my way to the hotel I always end up running into street performers dressed in character costumes, soliciting tourists for tips to take a picture.  I took this snapshot for my kids, and seconds later I was being chased by the Sesame Street & Frozen gang, demanding to take pictures with them.

Luckily, I was just around the corner from the hotel entrance, and off I went to the 6th floor of Marriott Marquis, to get to the Broadway Ballroom where CanJam NYC 2019 was about to begin!

Please keep in mind, the following write up is a Report, not a Review.  For consumers, attending CanJam gives a perfect opportunity to hear and compare the audio gear that they are interested in buying.  For reviewers, this is a perfect opportunity to preview and get an idea of what would be interesting to test and review in the future.  When I take notes and collect sound impressions, I prefer to take my time in a quiet environment before finalizing thoughts to share with my readers.  Therefore, this is going to be only a Report of what I have seen and heard at the show.

Also, pictures were taken with a phone in a rush, and some end up being out of focus, thus I will only share the best ones.  Furthermore, the show report is organized in a timeline order as I visited different tables.

Cayin was my first stop and I enjoyed their private location, shared with Meze in URIS room to the left of the main showroom, where Andy Kong had not only the collection of their own latest desktop and portable gear, but also a lot of popular IEMs and full size headphones.  The quiet less crowded environment of that room is perfect for a private auditioning.

Debuting at the show was their new iDAC-6 mk II, successor to iDAC-6 which I have noticed other audiophiles use in a matching stack up with iDAP-6 transport and iHA-6 fully balanced amplifier.  Their HA-300 direct heated triode tube headphone amplifier was on another table, literally having its own spotlight. 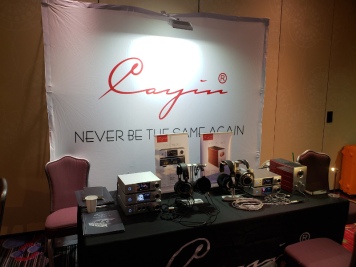 There were also separate tables with Cayin portable DAPs, including N3, N5iiS, and the flagship N8.  That location also had many different IEMs and headphones.  While I have tested and reviewed all of their DAPs and quite familiar with the sound and the design, what caught my attention was N8 accessories.  One was VanNuys small carrying case with an adjustable velcro strap to allow access to both 4.4mm solid state and 3.5mm Tube amp outputs.

Another one was Dignis case with a clever design using re-enforcement tabs with a leather case over it to keep the volume and jog wheel knobs protected from accidental bumps.

After the Cayin, Meze was my next stop.  Last year Cayin and Meze also shared the same room where they had the grand introduction of Meze Empyrean Isodynamic Hybrid Array headphone, a joint design venture between Meze Audio and Rinaro Isodynamics.  It has a unique design featuring Rinaro Isoplanar Diaphragm with a symmetrically placed hybrid magnet array on each side of the diaphragm.  While last year I only heard the prototype, this year Meze was presenting the final production quality model, and even for someone who is mostly into IEMs, I was very impressed with the sound tuning, especially driven by Cayin N8 DAP it was paired up with. 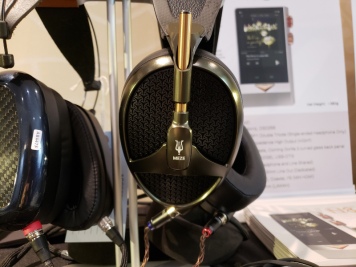 Meze were also presenting their new IEM flagship, RAI Penta.  This is a 5-driver hybrid with a single dynamic driver and two dual Balanced Armature drivers. These IEMs definitely have an eye-candy design and come with a nice cable and set of premium accessories.

I know many will be puzzled by me bringing up Dita here, considering they didn’t attend CanJam NYC 2019 (but where here in 2018).  Andy of Cayin had a demo unit of their latest Project 71 (P71) single DD IEM which equipped with a new premium Dita OSLO cable.  It’s a very unique Brass/Wood fused design, with a housing material having a great influence on the tonality.  The OSLO cable is quite unique as well and comes with their “awesome” plug which can be interchanged between 2.5mm, 3.5mm, and 4.4mm terminations.  Unfortunately, the first production batch of P71 was limited to only 300 worldwide pieces.  I just hope after seeing the demand, Dita will reconsider and build another batch of these little bees. 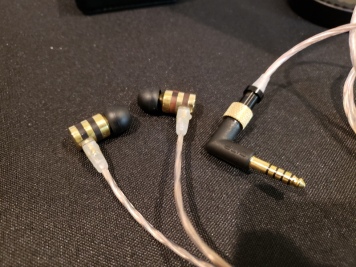 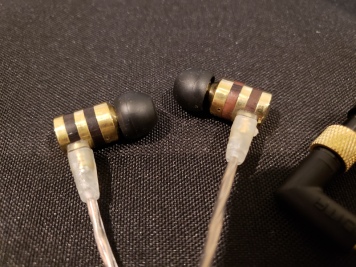 Next door to Cayin/Meze in Plymouth room I visited Woo Audio where Mike Liang was showcasing their latest top of the line WA33 fully-balanced tube headphone amp/preamp paired up with the latest ABYSS 1266 PHI (66mm planar magnetic) headphones.  I have watched many of Mike’s audio gear unboxing videos on YT, and it was nice to meet him in person.

While I’m more into portable audio setup with DAPs/IEMs, I was curious to hear 1266 PHI because they look different from anything else I have seen.  Even with a headband adjustment, there is a hinge in the middle at the top to bring earcups closer in, the clamping force was rather loose.  Apparently, it was intended by design to have earcups close but not tight, like two full size speakers next to your ears.  Surprisingly, the weight distribution of headphones was quite balanced and they felt comfortable on my head.

This room was also shared by Kimber Kable where they had a premium Sony setup with their latest DMP-Z1 Desktop DAP, flagship MDR-Z1R headphones, and as you might have guessed – Kimber Kable connecting both.  For those familiar with Sony NW-WM1Z DAP which features Kimber Kable wiring, DMP-Z1 is a super sized version of this portable flagship DAP, both in sound quality and output performance.  It has a unique design, this time using two AKM flagship DACs, not exactly portable but more transportable in size while still being battery powered, and featuring one of a kind custom-crafted gold plated analog rotary volume controller, and also internal Kimber Kable wiring.

Back in the main showroom hall, my first stop was at Audio-Technica table.  They were showcasing the Bluetooth wireless version of their legendary ATH-M50xBT, and also introduced a wireless active noise canceling ATH-ANC900BT which is a new top of the line version from QuietPoint series.  I was also reminded that ATH-MSR7, in addition to active noise canceling version MSR7NC, got updated to ATH-MSR7b with a balanced cable connection, including 4.4mm terminated stock cable. 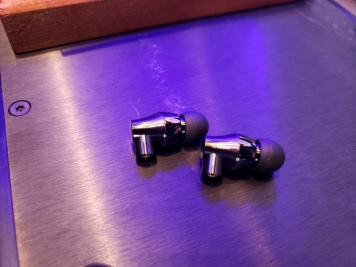 In addition to titanium IEMs, they also had ATH-AP2000Ti over-ear headphones with proprietary large-aperture 53 mm drivers, also diaphragms with a diamond-like carbon (DLC) coating, and the rigid, pure-titanium housings which incorporates Audio-Technica’s Double Air Damping System (D.A.D.S) indented for enhanced bass reproduction.  These headphones come with 1.2m and 3.0m cables, terminated with 3.5mm SE plugs, and 1.2m cable terminated with a balanced 4.4mm plug.  Glad to see Audio-Technica following the latest 4.4mm standard.  But one pleasant surprise here – no more 3D Wing support, something I was never a big fan of. 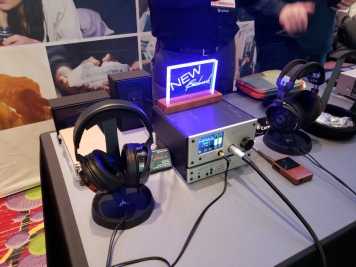 Sony table had both audiophile and consumer grade products, but for me personally the main attraction was finally meeting Sato “Tomo” Tomoaki, the man behind the engineering team that brought to us WM1Z, WM1A, ZX300, and their latest beast – DMP-Z1.  He literally refers to these products as his babies, and I’m aware from many Messenger chats with him how much time and effort goes into the development of each before they see the audiophile world.

The latest “baby” is their transportable DMP-Z1 DAP, featuring the custom passive-balanced volume potentiometer, two independent AK4497EQ flagship DACs, a massive 1500 mW (into 16ohm) to drive even the most demanding headphones.  It also has independent power system and built-in five battery cells to drive both digital and analog amplification circuits independently, 1 battery cell for digital, and 4 battery cells for analog.  Of course, many are familiar with their “golden brick”, WM1Z DAP which still attracts audiophile and many other manufacturers since I spotted many of those at different tables throughout the show.

DMP-Z1 was connected to Sony’s flagship MDR-Z1R headphone from their signature series, featuring a custom 70mm High Definition driver.  But what caught my attention was one of their consumer products, the latest incarnation of WH1000XM3 – active noise canceling Bluetooth wireless headphones with a native LDAC decoding support, intuitive touch control (up/down, left/right swipes), adaptive sound control, 40mm driver, 30hr battery life, and a very comfortable fit.  I had those paired up with my Galaxy S9 and did a quick test with and without LDAC enabled – the sound difference was quite noticeable in favor of LDAC codec.

oBravo products generate a lot of buzz, often for the wrong reasons due to pricing.  As a result, many don’t realize that these full size headphone hybrids and IEM hybrids feature a separate dynamic driver and another AMT driver, referring to Air Motion Transformer tweeter found in floor standing speakers.  As far as I know, oBravo is the only company which specializes in scaling down AMT tweeters to headphone/earphone level.  As a result, this R&D work is what driving the price up.  David Teng, the creative force behind the company, attends many shows and always available to answer questions and to explain the tech behind AMT.

While I’m more familiar with their flagship IEM, hybrid RA C CU that features 16mm dynamic driver and 8mm miniaturized AMT-II tweeter, this time I shifted my attention to their full size offering, a new HAMT Signature full size hybrid headphones.  These semi-open headphones feature a large 57mm Dynamic Driver and 40mm AMT tweeter, including a crossover filter with a massive Mundorf Mcap underneath of its Acacia wooden back cover.  Another interesting feature was a bass port tuning kit which comes with a set of different port plug to fine tune the low end performance.  These signature headphones also had Alcantara Velour earpads, carbon fiber headband, and titanium lifting rod to complete its premium look. 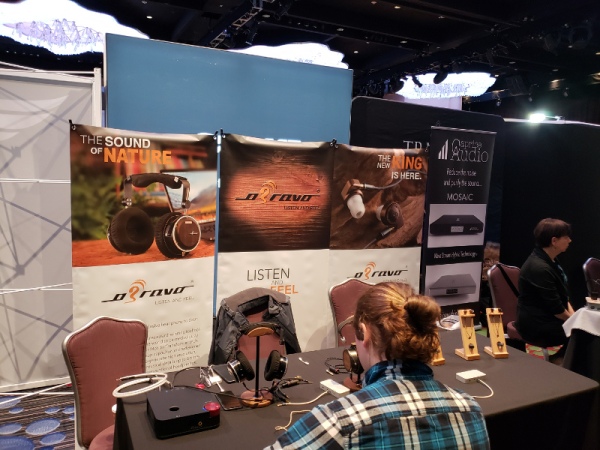