PROS: One of the Most Pleasant DAPs in Terms of User Experience, Ergonomic, Refined UI, Sound Quality

My colleague Wyville had already published his review on the M2X a few months back. Which makes my review of the M2X a second instalment on Twister6.com. To not let the readers puzzled as to why a second review of the same device, here is a quick backstory. I reviewed the Shanling M3S back in 2017 and wasn’t a fan of its wheel based UI. So when Shanling released the M2X, which had a touch screen based UI, it got me interested and I personally got in touch with them, expressing my interest regarding the M2X. Shanling was kind enough to provide me an M2X free of charge in exchange for a review.

M2X is an entry-level to mid-range DAP from Shanling that retails for $220. For full specifications, please visit Shanling’s M2X page. The device comes packaged in a typical cardboard style box that most DAPs in this price range come in these days. Shanling was kind to include a leather case for my unit, but the retail units don’t come with one and can be purchased separately for $18. The device also comes with a pre-installed screen protector. Apart from the device, there is a USB-A to USB-C cable and some documentation included in the box. I put my unit for charge for a couple of hours and powered it on to check out the UI. Unlike the wheel based UI on the M3S, which made me cringe every time I would have to use the device, the touch screen based UI of the M2X is quite intuitive and took no more than 30 mins to get comfortable with it. And most importantly, it has been a breeze to use the device. While it is no smartphone level of snappiness and smoothness, it is very much a polished UI. You interact with the screen through touch and swipe gestures. On any screen, swiping right from the left edge is the back navigation. And swiping up from the bottom edge takes you to the home page. Home page is a list of icons such as ‘All Songs’, ‘Albums’, Artists’, ‘Settings’ and etc, which you can customize based on your needs. On the bottom of the home screen, you have the ‘Now Playing’ bar, so from any screen, you could navigate to the Now Playing screen with a swipe and a touch.

On the right hand side of the device, there is a volume wheel, which doubles as a Power/Wake button. On the left hand side, there are the Play/Pause and Skip buttons, and the micro-SD card slot. Apart from the good UI, what makes interacting with the device even more pleasant is the physical size and weight of the player. While the high-end players offer top class sound, most of those are not exactly ergonomic. So I always like to have a compact DAP around for times when convenience takes higher priority over sound quality. But that doesn’t mean I don’t prioritize sound quality for such players. While I don’t expect a $200 player to perform at the level of the high end DAPs, I have a couple of criteria in terms of sound performance, which I expect the player to meet, if not exceed. For example, the signature should be balanced without straying too far into warm or bright territories, and it shouldn’t have any compromises in the non-tonal aspects. The M2X definitely meets my expectations in these 2 criteria. The signature overall is balanced with a tilt towards a warm and smooth sound. The warm sound is a result of smooth treble, rather than a boosted bass, so it doesn’t have any muddiness or bloat. Some would find its extensions on either ends, not quite at the level of more expensive players. But that is me nitpicking because it doesn’t have any apparent roll-off. There is sufficient body to the notes without sounding thick, which results in good transparency in the midrange. The treble, as I stated earlier, is a bit on the smoother side, so the player belongs to the forgiving camp. As an extension, don’t expect flagship level of details and resolution.

On the non-tonal aspects such as stage expansion, separation, layering and imaging, M2X performs as expected without any weaknesses or issues. But if I have to nitpick, the presentation can come across just a tad on the softer side. So people looking for a lean or bright or energetic sounding source need not apply. Overall the sound is coherent without any major flaws and definitely meets my overall expectations, and even exceeding it in a couple of aspects. When you are spending $220 on a dedicated DAP, you should expect it to perform at least on the same level as your smartphone’s HO or dongle. In comparing the M2X with my iPhone XR+dongle, I hear a blacker background, larger stage, tighter bass, better separation and transparency on the M2X. Of course the differences aren’t night and day, but definitely noticeable. The real advantage of the M2X over my iPhone’s dongle is with regards to output power. Compared to the dongle, M2X outputs more power, which provides more headroom for volume adjustment when pairing with medium sensitive headphones and IEMs. For example, with my Final E5000, I am close to hitting the max volume on certain albums, when running from my iPhone dongle. Where as on the M2X, I am only little past the half mark on the same album, roughly volume matched using my ear. And switching over to the 2.5mm balanced only increases the difference as the balanced port of the M2X outputs more power than the 3.5mm SE for the same load. The Balanced port also provides a slightly larger stage and better transparency. M2X also performs admirably on the other end of the spectrum, wherein, it has a super low noise floor, which helps sensitive IEMs to not pick up hiss. My EE Phantom is a super sensitive IEM and picks up hiss very easily. On the M2X though, I only hear an almost inaudible hiss. 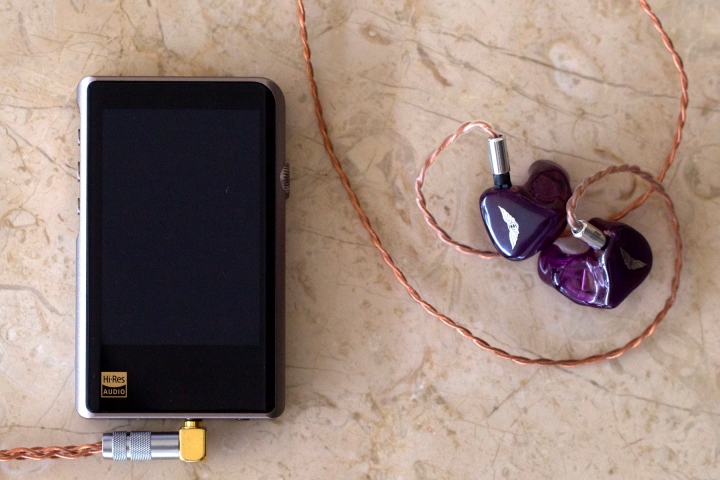 As for the bells and whistles on the device, it’s more or less the same as what M3S offered, except for a couple of addition and subtraction. M2X is equipped with 2-way Bluetooth, so you can pair it with your wireless headphones, or it can act as a Bluetooth receiver to stream music from your smartphone or PC. I tested both use-cases using my Sony WH-1000XM3 and my iPhone XR. Pairing was straight forward and I did not experience any drop-outs or break-up within a reasonable distance. The device supports some of the highly preferred wireless audio protocols such as APTx and LDAC. The device is also equipped with WiFi and a Tidal client, so you can stream music directly on your M2X. I don’t have a Tidal account, so I am unable to share my thoughts on it. Please check out the M2X thread on head-fi for more info on the Tidal client on the device. The device doesn’t have an FM tuner, but it’s not surprising, as most DAP in the market seems to not have one. My only issue with the device when it comes to features is the EQ. The EQ itself is more than effective. But the problem is, the device doesn’t automatically adjust the preamp gain when EQ is enabled. So when you bump up any frequency band by a few dBs, you either run into distortion or clipping. On the other hand, if you using the EQ only to knock down any bands, you shouldn’t have this problem. So apart from those, you get the other standard I/O functions like USB-DAC, Line Out and Digital Out. I would say M2X has got all your bases covered. As for the battery, I get somewhere around 9 hours and I wish it was slightly better. But I am willing to forego a bit of battery life for the device being so ergonomic and light.

Compared to the M3S, I feel the sound quality of both devices lie in the same ball park. M2X does seem to sound slightly fuller, but has softer dynamics. I am really splitting hairs here. M3S’ outputs a little more power, but this shouldn’t be a deciding factor between the 2, as the difference is not huge. M3S also has slightly better battery life. Feature wise, as I already mentioned both sport more or less the same features, except for the Tidal client on the M2X. As for the UI, there’s no competition; M2X handily beats the M3S. Overall. I’d pick the M2X anyday over the M3S.

I would like to thank Shanling for providing the M2X for review. There are a lot of good devices in the market these days. For a device to stand out and be great, it should not only provide a pleasant experience when using it, but should make you come back for more. And M2X has been just that since I received it. For reference, I couldn’t say the same about the M3S because of its painful-to-use, wheel based UI. Given that M2X offers good sound quality, easy-to-use UI and comes with loaded with many good/useful features, it really is a complete package device. I haven’t tested any other recent DAPs in the $200 range, so I won’t make statements like; ‘M2X is the best DAP in the segment”. However, having used the device for the past few weeks, and how much I enjoy using it, I highly recommend the Shanling M2X to anyone looking for a DAP in the $200-$250 price point.