For analysing the sound, I used the LP6K together with the DITA Fealty because the stock cable comes with the very convenient Awesome plug that makes switching between sources (4.4mm and 2.5mm) easy and avoids the need to use an adapter. I also used the 64 Audio Trio (PlusSound Exo GPS) and Empire Ears Phantom (Eletech Plato/Effect Audio Eros II 8W) with an adapter by Astrotec. I always listen to a wide variety of music from Mozart’s Requiem to Caro Emerald and from Agnes Obel to the Rolling Stones. My aim is always to get a broad experience with the DAP that most closely resembles day-to-day use.

If the PMEQ is one of the LP6K’s main selling points, then the sound quality is the other. I have been really impressed with it. The LP6K has a neutral tuning and yet I would not be tempted in any way to call it sterile or clinical, quite the opposite. It is a highly dynamic sound that I found addictive from the first time I listened and it has not changed since. The LP6K provides a more open stage that is very clear and airy. Moreover, I felt that the imaging was excellent. I can’t compare this to TOTL DAPs, but it is the best I have personally heard so far. The image is very stable and the background is absolutely pitch black so that notes contrast very clearly against it. The level of detail that it helps retrieve is also very high and for a lover of classical music that is great because it helps to bring across nuances in the music much more clearly. 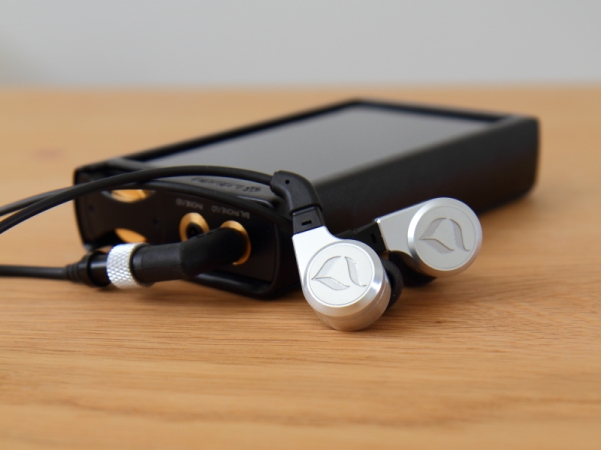 I always love listening to Paganini’s Violin Concerto no.4 with the Fealty and using the LP6K I find that more details come through of how the bow dances on the strings of the violin with the various Martelé and Spiccato techniques. Paganini uses a lot of those techniques where the bow bounces on the strings and the different techniques give different accents to the note. It makes the difference between a slow romantic waltz and cheerful jumping around in song and dance. The combination of the LP6K’s high dynamic range and level of detail makes this piece of music especially enjoyable. With Jazz, such as the smooth tunes of Madeleine Peyroux’s California Rain, this pairing seems to emphasize each instrument and the vocals without pushing them forward too much. The black background works especially well as a backdrop against which the instruments are set, each with plenty of air around it while maintaining coherency. It is so easy to enjoy that one instrument when I want it, or just listen to the performance as a whole.

A setup I really loved was the LP6K paired with my Phantom and the Eletech Plato. Both the LP6K and Plato improve transparency and the combination pushed the Phantom to a level of transparency I had not heard from those before. They are generally quite lush with full sounding timbre and this setup toned that down and although the Phantom are somewhat sensitive, the background remained pitch black even when I tried the high gain setting. This made Mozart’s Requiem especially enjoyable, as I had never quite heard the placement of the choir and solo vocals as clearly as this without loosing overall coherency.

Overall, I am very impressed by the sound of the LP6K. It balances on a fine line between being analytical and musical, leaning just a little more towards the musical side thanks to its excellent dynamics, and managing to do that with all the advantages of an analytical sound. This is what in my opinion makes the LP6K such a great tool for the serious audiophile. It presents a foundation of technical excellence that combined with the PMEQ means you can adjust in any direction you might like and it will work great because that foundation is so solid.

I don’t have many DAPs that would make a reasonable comparison. I really have just the one, which is the Cowon Plenue 2 (P2). It might be a bit dated, as by now Cowon has introduced two models succeeding it, the Plenue 2 mkII and the Plenue L, but it is an interesting comparison nonetheless, as it can still be found at a slightly lower price than the LP6K.

The P2 is a great DAP that I have used extensively for my reviews and the two DAPs are quite close, although I must definitely give the edge to the LP6K. The P2 is a bit warmer and can perhaps be said to have a slightly more natural tonality. The LP6K on the other hand has a larger and more airy stage, better dynamics, more detail retrieval and a blacker background. Interestingly, I find the LP6K smoother, despite the P2 being the warmer of the two. Both have an excellent EQ, but again Lotoo have gone the extra step to implement a fully parametric EQ that offers even more control. I say “even more” because Cowon’s EQ is nothing to be sniffed at either and the vast number of JetEffect 7 pre-sets is great if you do not like fiddling around with the EQ yourself. And lets be honest, Cowon’s EQ is pretty darn close to parametric as well.

Build quality of both is very similar and both come with very good quality cases. One significant different is that the Cowon comes with a 2.5mm balanced out, whereas the Lotoo has a 4.4mm balanced out. I have used the 4.4mm a bit more lately and I can see why so many people prefer it over the 2.5mm. I am even considering switching to it myself.

I love the P2 and I never feel like I am missing out when I use it, but I do feel that the LP6K offers a bit extra. Because I try to review as a day-to-day user, my measure is always how much I am inclined to use something and I found myself using the LP6K almost exclusively since I got it in.

Because the LP6K does not allow for apps to be installed, streaming has to be done by pairing it with your phone (etc) via the Bluetooth connection. I don’t stream myself, but do sometimes use a DAC for my MacBook Pro. Unfortunately, my MacBook is dated (late 2011) and this has caused some issue in the past with pairing other devices, which was once again the case with the LP6K. I am fairly certain this was entirely due to my MacBook because of the fact that I have had it with other devices as well. I also used it as a USB DAC with similar issues to those I had with (for instance) the FiiO K3 such as de-synching of videos.

Using the LP6K as a BT DAC was a lot of fun when I finally got it to work and I liked using the ATE setting ‘Diffuse Field (Far Field)’ in combination with my Lyra Collection earbuds so that the sound would feel more like it was coming from in front of me, instead of around me. I expect it should work fine with newer devices and to test it at least once, I also paired the LP6K with my Sony XA2 phone. With only a minor blip during the pairing (it took a couple of tries) I got it to work perfectly smoothly. The connection was also a lot better because with my MacBook I could not get up and walk to the kitchen without the connection failing, while with the XA2 paired I could walk around the house without any issues while leaving my phone on my desk.

Like I said, I don’t stream and don’t use Bluetooth that much, so this section can be considered ‘baby’s first BT steps’.

The LP6K is also able to connect via WiFi, but this is strictly limited to firmware updates. One issue a head-fi friend of mine had was that the keyboard does not support certain special characters that people do often use for their network passwords and it forced him to change his password before he was able to update the firmware. I did not have this problem, but it is something important to note and perhaps that a future firmware update can resolve this issue… which is rather ironic, now I think of it.

The Lotoo PAW6000 is in my opinion an amazingly good piece of engineering and as a pure DAP it performs superbly well with very few flaws. The few I found were only minor and, in my opinion, do not weigh in against the strengths the LP6K has to offer. It is a neutral but highly dynamic DAP with outstanding imaging and a pitch-black background. It has a fast UI, excellent build quality and a number of quality accessories such as a very nice leather case. Most of all, the solid foundation it offers in terms of sound quality is complemented by an outstanding PMEQ, which allows the user to change the sound in any direction. This makes the LP6K a powerful tool for serious audiophiles who want maximum control with minimum fuss. I can highly recommend a demo to anyone in the market for a DAP in this price range.