CONS: Shanling Music app could use a few tweaks such as gapless playback and proper loading of the library after booting up the M8, quite a big and heavy DAP.

I would like to thank Shanling for providing me with the M8 DAP in exchange for my honest opinion. No incentive was given for a favorable review.

Available for Sale on MusicTeck and other retailers.

Back when I wrote my first review of a Shanling product I took some time to get to know the company’s history and found out that although in recent years Shanling has made a name for itself with value oriented products, they made some pretty high-end HiFi gear in the past. That past experience, it seems, is now resurfacing with Shanling stepping things up for their portable products. Shanling’s new DAPs are leading the way in this trend with the M6 Pro already at a price point I would consider ‘higher up’. The flagship M8 however, has moved Shanling firmly into the high-end, even ‘Top-Of-The-Line’ segment. Not quite at the highest price point and thus still in a way close to its value oriented roots. Then again, Shanling still has a trick up its sleeve with the transportable modular all-in-one M30.

Talking about tricks, when Shanling first announced they were developing the M8 there was mention of it having interchangeable headphone sockets and I was immediately intrigued. So I followed every bit of news after that, eagerly waiting to see pictures of what exactly that was. Eventually though it became clear that the M8 was more than just a one trick pony and that Shanling had every intention of developing a true flagship DAP. I will admit that while interested, I was also sceptical because other companies have moved up from value oriented to the high end with mixed results. So did Shanling’s prior experience with high-end HiFi gear give them an edge while developing the M8? Let’s find out!

Unboxing the M8 provides you with a truly premium experience, although Shanling has not pushed it over the top. The outer cardboard box is a very nice one with its own unique color and which opens up with the front folding out to reveal the actual wooden box itself. The wooden box is just what I like to see with TOTL equipment. It is beautiful and gives you the feeling of having invested in something precious, which at this price it is. Some people might buy and sell expensive gear like they have a money tree growing in the garden, but for most of us mere mortals a DAP like the M8 is a big investment and having a stylish and sturdy box for storage is really good to have. 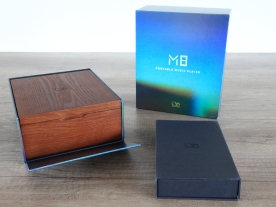 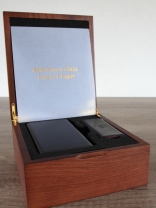 The top layer has the M8 itself alongside which you will find a very good quality leather case that houses the interchangeable sockets and the tool used for changing those. Below the M8 is a charger cable, two screen protectors and a warranty booklet.

Alongside the M8 I also received the leather case Shanling offers for it, which is nothing much in terms of unboxing, but the case itself feels and looks like premium quality. It does show small scuff marks fairly quickly, but I like that and I think the case will develop a great look over time.

There is no getting around it, the M8 is a big DAP. It measures 138mm x 80mm x 20mm and comes in at a hefty 342g as indicated in the specs, although I weighed it at 355g on my own kitchen scales with a microSD card inserted. This is not a DAP that you can fit comfortably in the pocket of skinny jeans. Then again, such jeans are an assault on male fertility, so men should avoid them to begin with and women could use it as an excuse to get a designer handbag to match the M8. (Middle aged men… Whatever you do, nothing, and I mean absolutely nothing, can justify reviving the bumbag.)

Still, the M8 is not the heaviest DAP I have come across, Sony’s WM1Z and Astell & Kern’s SP2000 Copper both weigh a solid 100g more at 455g and 432g respectively. Not to mention Astell & Kern’s older copper DAPs with the matching amps, which I believe come in at over 600g combined. The M8 is in my opinion still a portable, although starting to move towards where I feel the limit would be for me personally. I can see myself taking the M8 along to work for instance, but during the commute itself I would probably prefer a smaller DAP. Especially under the sort of pre-Covid circumstances back in London where I was crammed into the Piccadilly line tube like a sardine, something like the Shanling M0 was a much more convenient solution. Avoids embarrassing conversations that start with: “Is that a DAP in your pocket, or are you just happy to see me?” 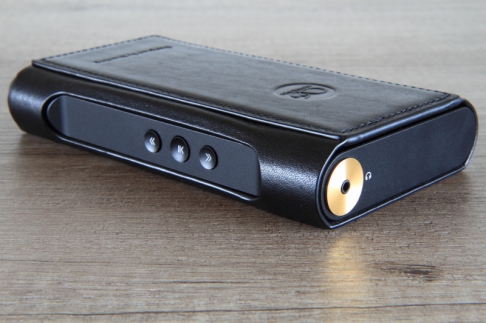 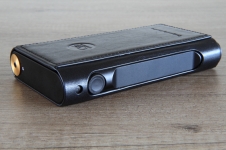 While big, the M8 is very well built around a one-piece, high-grade aluminum chassis. At the front you can find an excellent 5 inch, full HD screen that has vibrant colors and is really crisp and clear. I actually installed YouTube just to see what it was like and image quality is great. The large size of the screen also makes it very practical for watching videos and you get great sound to boot. The back has a high-quality plastic cover with two transparent sections under which you see the Shanling logo and the usual “hi-res” type of information. It is a tiny and fairly insignificant detail, but I really like how these are not the usual stickers or printed on. This gives a little bit of depth perception that adds to the overall feel of refinement of the M8. 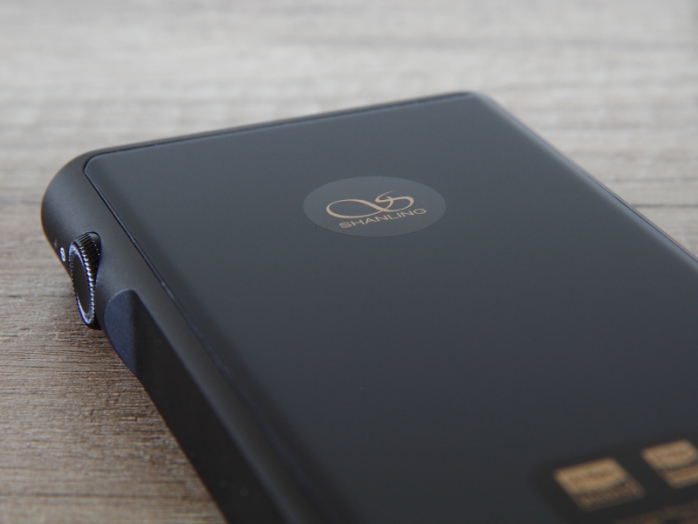 The sides have a nice indent for good grip, which is similar to what you see on Sony’s WM1A/Z except now in Shanling’s own very clean style. On the right side you can find the on/off volume button and a small light indicating when the M8 is switching on or being charged. On the left side there are the three standard control buttons: back, play/pause and forward. The buttons feel really good, solid and responsive, and I can imagine someone spent time on getting the feel of the buttons just right. It is another detail, but one you really notice when you use the M8 a lot and at this price point such details are important for the overall perception of quality, which is very good. 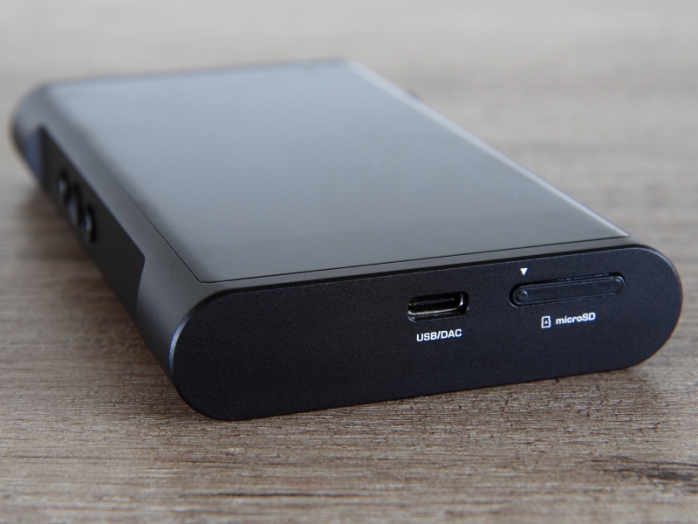 At the bottom there is on the right side the memory card slot with a cover, which I like to think it gives a little extra protection against dust and dirt. In the middle is the USB-C connection for charging and DAC function. Then moving to the top we find the finishing touch to a very clean look: the single interchangeable headphone socket. The interchangeable socket system is of course a key design feature and so I will treat it separately.

Shanling have come up with something really unique in response to an increasing number of balanced terminations that are offered on the market. The system they came up with is, as far as I am aware, unique and allows easy switching between the standard 3.5mm Single Ended out and 2.5mm, 4.4mm and 3.5mm Pro balanced out. It also offers the prospect of more modules being added at a later date to add to the versatility.

It is very easy to use and feels solid. It works by sliding the included tool over the top of the module that is in the M8 and simply pulling it up. There is some resistance for a secure fit, but it doesn’t require a lot of force either and so should not cause for concern that you might break something. It is a smooth system. Placing a different socket is simply pushing a new one in, which I usually do with the tool, but I don’t think that is necessary. In terms of orientation, it is fairly straightforward because there is a ball locking mechanism. On the module you will see a little ball and that needs to point outwards. You can’t really go wrong with it because it doesn’t fit the other way around.

The interchangeable socket system is a very clever solution for the problem that there are too many different terminations out there and more coming, like the increasing popularity of the 3.5mm Pro. This system essentially future proofs the M8 because more modules can and will be added. For instance, at the time of writing Shanling is developing an RCA module for the M8.

Is it the perfect solution? I am not sure. I appreciate that Shanling has been working on a solution that is more elegant than having a DAP full of holes (multiple sockets). There is however the question of durability with frequent changes of the modules. The interchangeable socket might in time form a weak point when changed regularly, but I am not sure if that is the intended way of using the system. For me, I plugged in the 4.4mm balanced and rarely touched it after that. I even often used an adapter for the few times I was using a 2.5mm plug. Only if my reviews required regular use of a different socket type did I change it and then I planned it so that I wouldn’t have to change back constantly.

I see the system mainly as a useful way for customers to adjust the M8 to their preferred socket type and have the option to change to another type later on. So less intense use than constantly swapping and more about future proofing the M8. Something of an alternative to Shanling fixing a single socket and marketing different versions of the M8 based on socket type in order to keep the clean look and more space internally, while still being able to offer the M8 with every output. (If you get my meaning.)

That said, I do find I miss the combination of 3.5mm SE and 4.4mm Balanced, as IEMs generally come with a 3.5mm cable stock, but I use 4.4mm most of the time. The best solution in my opinion is still a cable with an interchangeable plug such as DITA’s Awesome plug or similar solutions offered by DUNU and FiiO.

All in all I do applaud Shanling for coming up with this innovative solution and expanding it beyond the standard output sockets. That is also where this system has a distinct advantage, being able to offer more sockets for a wider range of uses than traditionally found in DAPs. 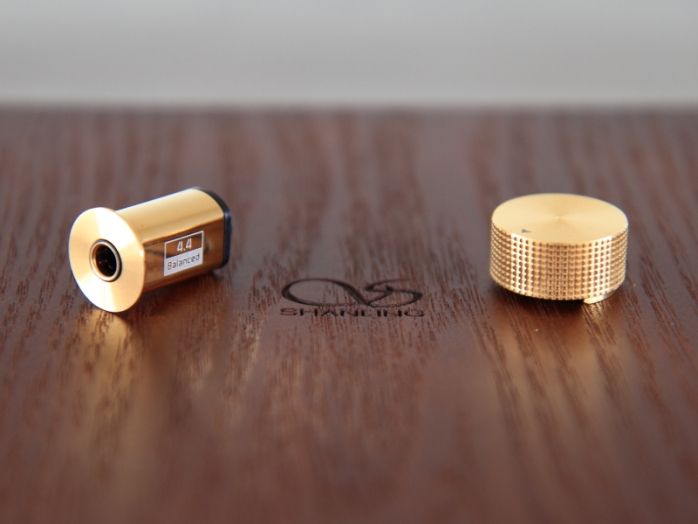