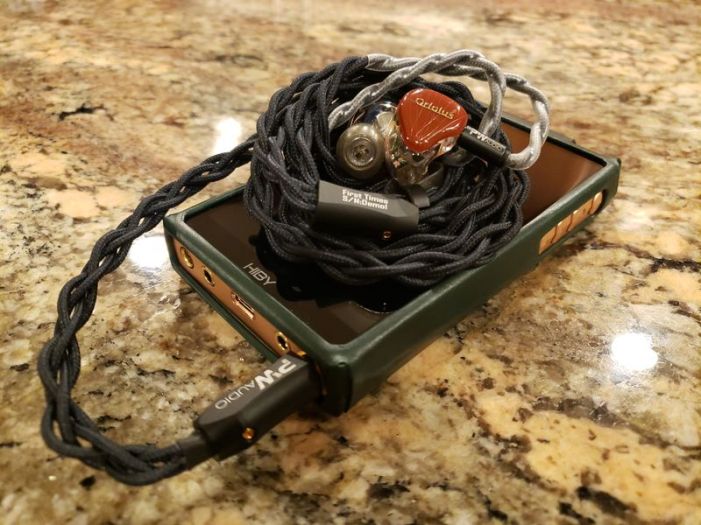 I prefer to describe the DAP sound based on the comparison to other DAPs and pair ups with different IEMs/headphones since the DAP by itself doesn’t have a “sound”.  What we hear is how it sounds through IEMs/headphones connected to it or the difference relative to other sources using the same pair of IEMs/headphones for monitoring the sound.  As a result, this section of the review usually summarizes what I find in the follow up Comparison and Pair-up sections.

Let me start with a sound description using default setting, no IEM presets and NOS filter enabled.  Under these conditions and with a number of IEMs (not just Traillii), I hear RS6 to have a natural organic tonality with a more intimate sound presentation.  It brings up a deeper sub-bass and a little softer and slower-attack mid-bass and puts a bit more focus on mids.  I’m hearing a fuller body lower mids and natural detailed upper mids.  And to round it off, I also hear a smoother treble with a more organic sparkle.  Basically, in a default setting you will hear RS6 delivering a more relaxed laidback natural tonality of the sound.

This presentation of the sound has more intimacy with soundstage not spreading too wide but having a good depth.  I felt like being closer to the center of the stage with imaging that still maintains a relatively accurate placement of the sounds.  With all that in mind, the tuning was great for instrumental and vocal tracks, classical music with natural non-synthesized instruments, and any tracks where you want to get the best from vocals and instruments with a natural timbre.  It worked OK with EDM or pop/rock songs as well, but I felt like it was lacking a bit of energy.

Then, within a few weeks, Hiby issued fw 1.20 update and started to add more IEM presets.  That is when things started to get more interesting, especially after VE (Vision Ears) IEM presets were added and I was able to hear more sound refinement, especially when you select VE Erlkonig preset which improves soundstage width, adds more 3D dimension to imaging, and even introduces some improvement in vertical dynamics.  The resent fw 1.30 actually improved the default sound, making it sound closer to VE Erl preset.  With fw 1.20, I heard more contrast going between default sound and Erl preset, while with fw 1.30 the gap is not as big. 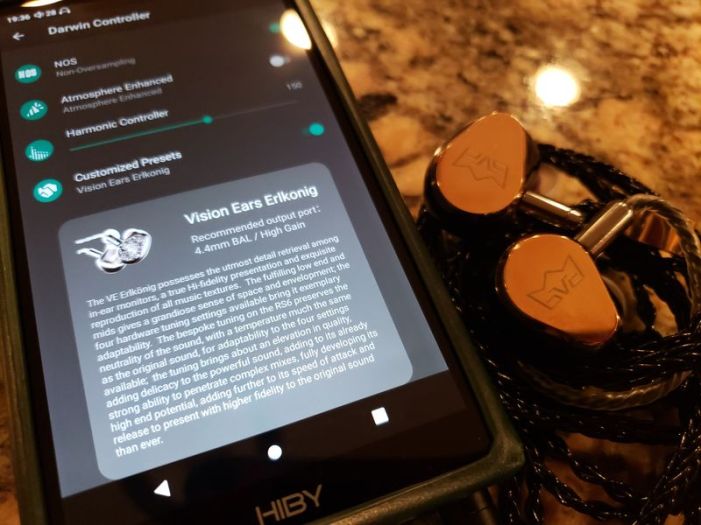 When you switch between 3.5mm (SE) and 4.4mm (BAL), I don’t hear as big difference in sound.  Tonality is nearly identical, soundstage is just a little bit wider in BAL, and I can hear the difference in output power since I had to adjust the volume.  One thing I do want to mention, be careful not to insert headphones in LO port (to the left of usb c port) since volume in LO is fixed at max level.

I was intrigued by settings available under Darwin Controller page, and here is what I found after spending hours of testing and comparison.

Low-pass Antialiasing filter setting – I tried to listen very carefully between all 10 available filter presets but wasn’t able to detect any difference in sound.  I was told by Hiby, there is a difference in output sound waveform when switching the filters; I guess the change doesn’t have as drastic audio effect.

DSD Filter (new in 1.30 fw) – for now it only has Default and Darwin-1 presets.  While playing a few of my DSD test tracks, I do hear the sound being wider and more dynamic with Darwin-1 preset.  A subtle, yet still a noticeable change if you listen closer.

NOS (non-oversampling) – also a subtle effect, but I do hear a bit of soundstage improvement, making sound a touch wider, some improvement in vertical dynamics, and I find the background to be a touch blacker.

Atmosphere Enhanced – could be splitting hairs, but it made soundstage stretch a little bit wider, but it was a very subtle effect.

Harmonic Controller (new in 1.30 fw) – this setting is brand new for 1.30 fw, and I noticed it changes its value as I cycled through IEM presets.  That means that IEM manufacturers used this control when finetuning their presets.  According to Hiby, this controller changes the amplitude of a digital signal, like adding a tube saturation.  I need to spend more time analyzing the effect of this controller, but in my initial testing I noticed that at setting 0 the sound has a sharper/faster attack while all the way up to 255 the notes have longer attack and decay which makes the sounds a little smoother, more laidback, and more analog. 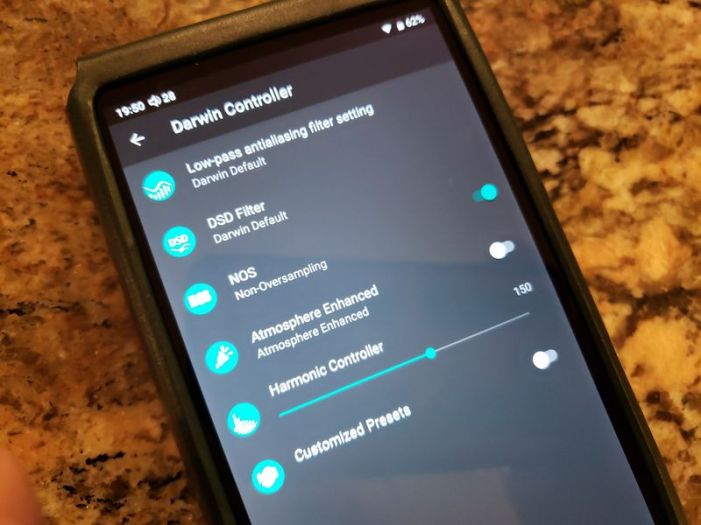 And last, but not least, Customized IEM Presets.

Everything was tested with corresponding IEMs, keeping RS6 on high gain, and using BAL output.  While changes are not very drastic, with some IEMs they do provide a very delicate subtle finetuning that to my ears improves the performance of RS6 when it comes to the soundstage, imaging, the transient speed of note on/off, and even the perception of vertical sound dynamics.  And again, changes are subtle.  Also, please keep in mind, these impressions were collected under fw 1.20.  These IEM presets don’t show up after fw updates, but as long as you have wifi connection, they get added automatically. 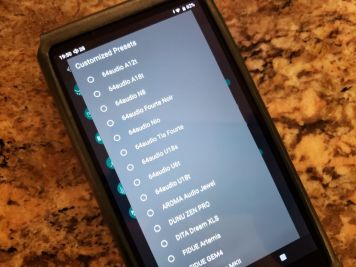 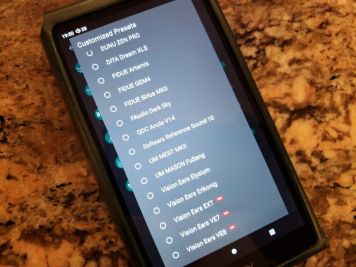 VE EXT – I hear a sharper transient of notes which improves the definition of the sound and makes background blacker.

VE VE7 – the sound has a little faster attack and overall feels a little tighter.  This one I tried with a stock single-ended cable.

VE Erlkonig – I hear a wider soundstage, more 3D imaging, faster transient of notes with improved definition which makes the sound tighter and the background blacker.  This is by far my favorite preset which I set as “default” sound for RS6 to use with all IEMs.

VE Elysium – the soundstage is wider, and imaging also improved.  Also I hear a sharper transient of notes which improves the definition of the sound and makes background blacker.

Next was a series of 64 Audio presets.

U18T – by default (RS6) the sound of these IEMs is a touch smoother; with corresponding preset the sound is a bit more energetic, with higher definition and a touch wider soundstage.

U18S – very subtle change, with a sound being just a touch sharper, like a very faint veil lifted off.  But the change is very subtle, had to switch many times back and forth to detect it.

Tia Fourte – a little improvement in soundstage width, and a bit blacker background.

Fourte Noir – a more noticeable improvement in soundstage width, and a little more transparency in mids.

Nio – a more noticeable change in soundstage expansion, definitely an improvement in width.  Also, I hear the sound to be more dynamic.

A few other presets:

FAudio Dark Sky – I hear an improvement in soundstage expansion and higher definition of the sound with better extraction of micro-details.

SoftEars RS10 – don’t hear much of a change.

UM Mest MKII – don’t hear much of a change. 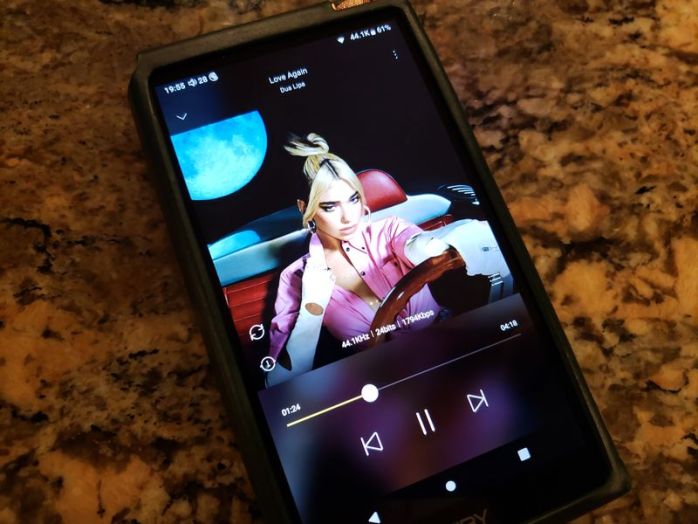 Page 4 – Pair up, and Comparison.
Page 5 – Wired/wireless connection, and Conclusion.