How do you follow the release of the first R-2R Android DAP?  If you are Cayin, after the introduction of R01 DAC/amp card for their modular N6ii DAP, the answer would be the first R-2R usb DAC/amp dongle.  Following a popular release of R01 which brought their 2-year-old N6ii back into the spotlight, to an unexpected surprise of many audiophiles, Cayin scaled down the R01 design into a small standalone usb dongle with a power to transform your smartphone, tablet, laptop, or another DAP into a hi-res audio player with discrete resistor R-2R Ladder DAC.

Last year R-2R was a popular buzzword circulating around audiophile communities.  While the design principle behind it has been around for a long time, the deficiency and discontinuation of various Delta Sigma DACs triggered by AKM factory fire and chip shortage during challenging pandemic times pushed some manufacturers to be more creative and to bring this discrete solution down to a portable DAP level.  And when I say discrete solution, I’m talking about dozens of small resistors forming a discrete R-2R Ladder DAC.

If you think that was challenging to pack into a pocket friendly DAP or a small modular card, imagine getting it all inside of a small usb DAC/amp dongle.  Actually, dongles have been making a big comeback lately, feature-packed with SE and BAL outputs, control buttons, and a display to access the config of the device without a need for an app, everything you will find in this latest Cayin release.  After spending 2 months of testing RU6, plus a ton of posts I made and questions I answered on Head-fi about it, it’s time to summarize everything in my full review.

RU6 arrived in a compact black cardboard box with a glossy 3D picture of the device on its cover.  Inside, you will find RU6 sitting securely in a thick foam cutout with accessories underneath.  Included were a short, properly shielded usb-c to usb-c OTG interconnect cable and a cool usb-c to usb-A adapter to use RU6 with devices that have standard usb port.  Also, there was a detailed manual in multiple languages, including English. 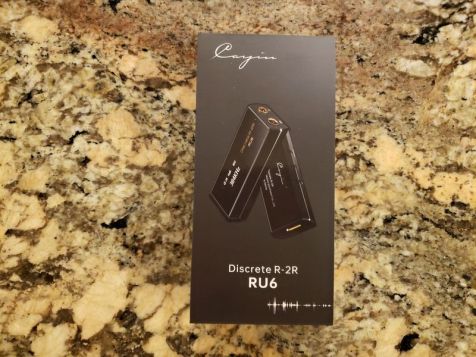 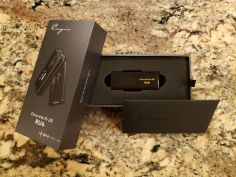 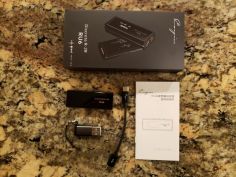 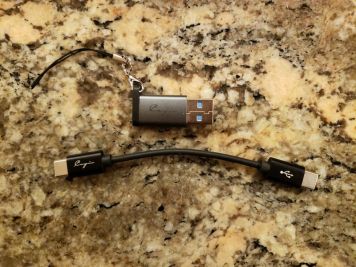 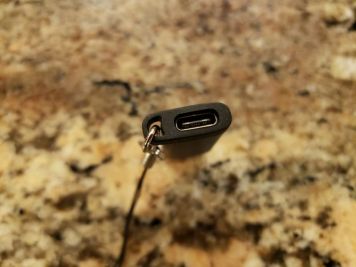 For those with iPhone who require usb-c to lightning cable, Cayin also offers one (CS-L2C model) with the same shielded wires and quality connectors, but it is optional and you have to buy it separately.  Another optional accessory which I highly recommend is their leather case which comes in blue and orange colors.  It is not that expensive, looks sharp, and will protect your RU6 from scratches and minor bumps.  Plus, the back of this leather case is magnetic which should work with some equipped smartphones, or with an included matching leather covered small metal plate circles which you stick on the back of your mobile device. 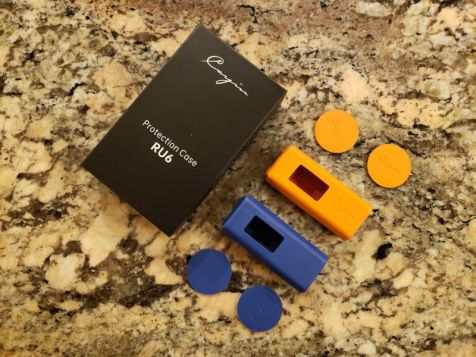 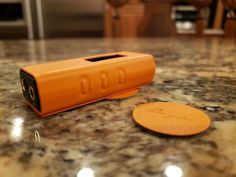 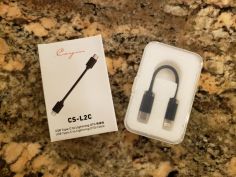 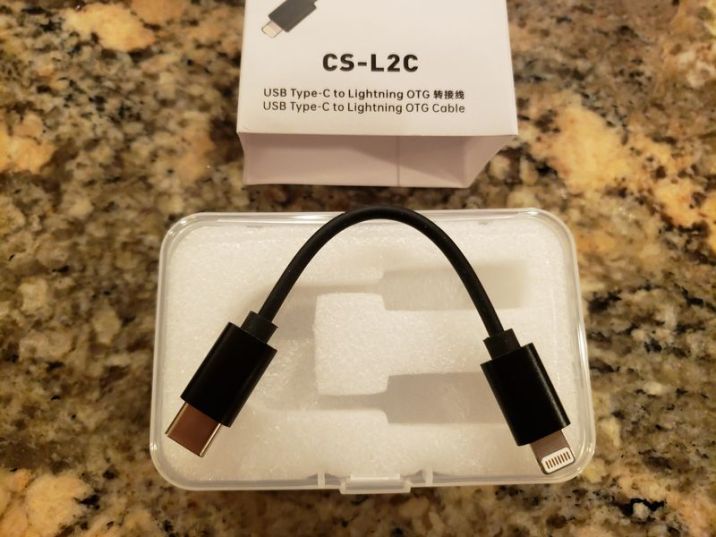 Design and under the hood.

According to Cayin, while they have realized a growing demand for high end usb dac dongles, they were not satisfied with off-the-shelf DAC solutions for dongle application and were not in a rush with their own dongle.  But while working on R01 card for N6ii, they recognized that discrete resistor R-2R DAC implemented in that design could make a perfect low power DAC for use in a dongle which draws its power from a host.  That’s how RU6 was born and became a discrete resistor R-2R usb DAC/amp dongle for a portable use with iOS, iPad OS, macOS, Windows 7/8/10, Android mobile and tablets, and DAP devices. 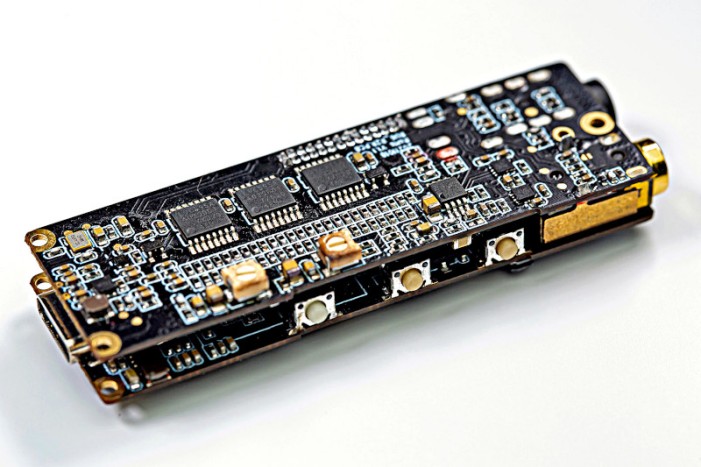 Since we are not dealing with a small DAC chip, but rather 96 pieces of high precision (±0.1%) low TCR (25ppm/℃ temperature coefficient of resistance) resistors for two channel 24bit R-2R decoding, you can’t expect the smallest frame, though they did come close to competition with its CNC aluminum chassis being 65mm x 25.4mm x 13.7mm and weighting only 28g.  One end of the device has usb-c port and the other end has 3.5mm TRS single ended and 4.4mm TRRRS balanced outputs.  On the top you will find 3 multi-function buttons, Volume +/- and Mode.  All 3 buttons are the same size, aligned, and spaced evenly, have a nice tactile response, no rattling, and feel solid with a click when pressed. 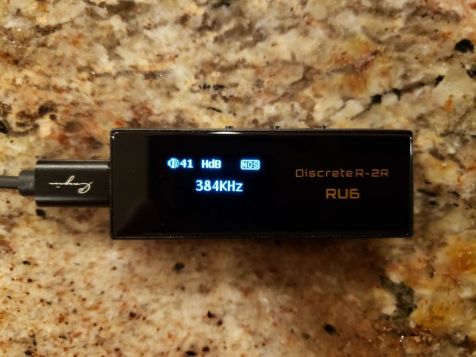 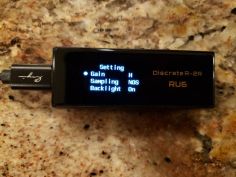 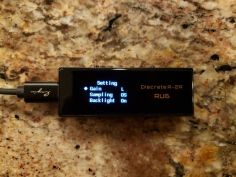 On the front of RU6 you will find 1” OLED screen display to view playback info, such as sampling rate, volume level, gain setting, and NOS or OS oversampling mode.  By long pressing Mode button you get into Settings menu where you short press Mode button again to step through settings and use Volume +/- buttons to change Gain (high/low), Oversampling (NOS or OS) mode, and Screen Backlight timeout from 10s to 60s or always on until you press Mode button again to turn on/off the display.  RU6 doesn’t feature EQ presets or other extra functionality like in some other dongles, so its Setting menu is simpler.  But at the same time, you get a bird’s-eye view of all the settings at once on its 4-line display without a need to go to the next page. 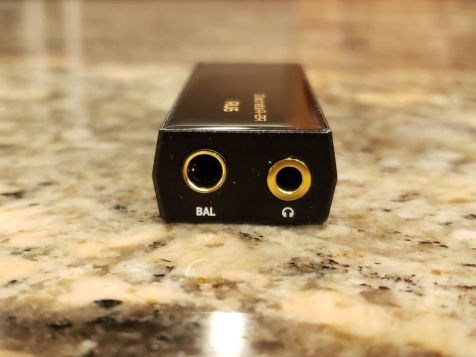 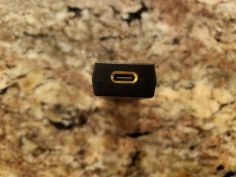 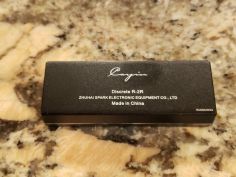 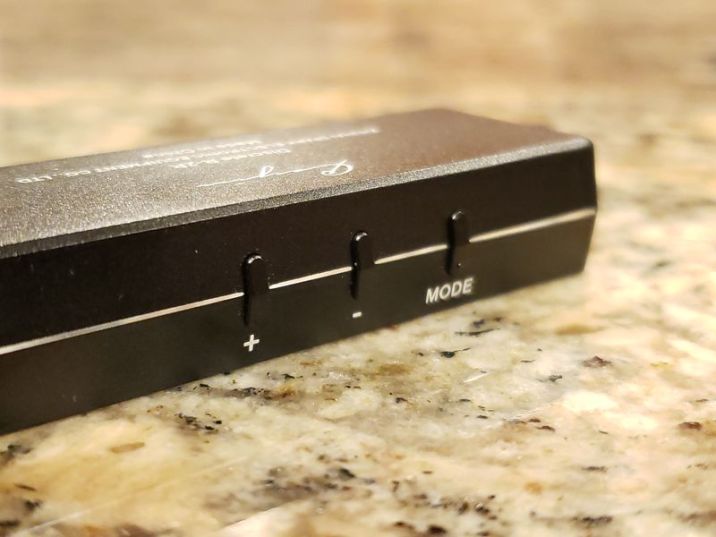 Similar to R01 design, RU6 consists of digital and analog sections with R-2R Ladder DAC bridging them together.  On the digital side you have:

For a greater accuracy and less jitter, a local reference clock (24.576MHz) is provided for USB and Digital Audio bridges.

With R-2R DAC circuit depending on the integrity of the incoming digital data, for the best sound quality it is recommended to keep digital volume of your source at the max and control the analog volume from RU6.  According to Cayin, that presented a challenge of picking the volume control with higher precision, lower noise, and less power consumption.  So, they developed their own high precision resistor array volume control with 99 steps partitioned in 9 sections of resistors and switching relays.  And since switching relays introduce an audible pop, Cayin implemented a short delay in volume adjustment as you cross every section by muting that pop.  So, when you are adjusting the volume and hear a very brief audio pause as you cross every 10 steps, this is normal and intended by design.

Another thing to note, RU6 doesn’t have a fully balanced design since there is no room for all the components.  The signal path is single ended as the audio signal goes through R-2R DAC, Low Pass filter, Resistor Array volume control, Line Driver, and Phone Amplifier with gain control.  But due to a demand for higher power output and popularity of 4.4mm balanced cable termination, Cayin added an extra op-amp, unity gain amp identical to the primary headphone amp op-amp.  It converts the original stereo signal to negative phase which is used for balanced 4.4mm output and provides extra power and current.  Thus, you have single ended 3.5mm (0.5ohm output impedance) with 138mW @32ohm and balanced 4.4mm (1ohm output impedance) with 213mW @32ohm.