CONS: Nitpicking – Not the best treble extension in the price segment.

The product was sent to me free of charge for the review in exchange for my honest opinion. I covered custom duty for importing the product.

KBEAR and TRI are brands of Shenzhen Lingyin Technology Co. Ltd. China. TRI is their premium line of in-ear monitors whereas KBEAR is positioned as a more value for money IEM and cable brand with products mostly under ~$200.

Included in the box. 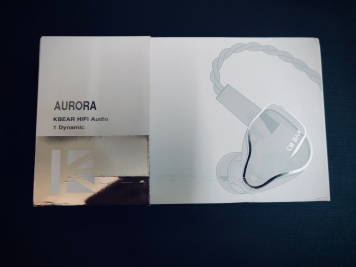 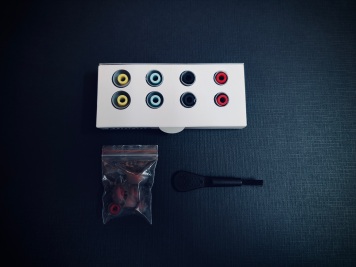 Aurora has oxidised aluminium alloy shells and feel well built to last. It has ergonomic semi-custom shaped shells and you can customise the fit and insertion depth by using the variety of ear tips KBEAR has included in the package. The shell has 2 vents for the dynamic driver. Passive noise isolation isn’t as good as a full resin IEM with no vents but is fairly decent to not be an issue for moderately noisy places.

Cable – Since KBEAR sells cables under their own brand name, it might come as no surprise that they’ve included a very nice, dark grey coloured 2-pin 8-core silver-plated OFC cable with 3.5mm jack in the package. It’s not the supplest cable but feels quite nice and pairs really well with Aurora colour wise.

Case – Aurora’s case is the same case that Simgot IEMs came with. It’s a faux leather case with a magnetic closing mechanism. It easily fits Aurora but you can’t really put any accessories in it.

Graphs are measured using an IEC60318-4 (IEC711) setup. You can compare all the graphs on my IEM Graph Database here – Animagus Squiglink.

Summary – Aurora has a W-shaped signature which makes for a more fun and exciting listen than neutral-reference. It has a 4-5dB bass boost, a dip in the lower-midrange, a dual-peak forward upper-midrange with around 10-12db of pinna gain, a dip in 5-8kHz lower-treble, sparkly mid-treble and warmer upper-treble presentation. It’s an IEM that focuses on a clarity based clean presentation with a bass boost that is very tastefully balanced so that it never bleeds or overpowers the mix but can bring in the slam when required. The treble presentation does highlight some treble frequencies more than others and isn’t the most linear but it makes for quite a musical, fun and exciting listen than bland or troublesome.

Bass – Aurora’s perception of bass presence and quality depends on the ear tips you choose and the kind of fit you get. With a very snug fit I perceive a 4-5dB north of neutral bass boost, which is very tastefully tuned to its forward upper-midrange and exciting treble. It plays along really well to Aurora’s clean and clarity driven tuning without ever overpowering the rest of the instruments or bleeding into the midrange. What I really like is how it has BA-like quick transients and DD-like slam and punch when required. If you’re the kind of person who wants bass to play along to the mix of the song and not try and be the MVP, Aurora will work really well for you but if you’re the person who likes lots of bass in their IEMs, I’d suggest trying an IEM with a bigger bass boost than Aurora.

Mids – Coincidentally, Aurora has a dual-peak forward upper-midrange presentation with its primary peak at 2kHz and another one around 5kHz, exactly where 64 Audio’s U12t has it, but with more ear gain in comparison. This kind of forward presentation always makes for strong, forward instrument definition with vocals, guitars and drums taking front stage – the kind I as a musician/audio engineer likes. Aurora going with 2kHz as its primary peak instead of the more accurate sounding 2.75kHz-3kHz and instead dipping around 3kHz, colours the tonality of instruments slightly but does it so minorly that most will only realise when they A/B it back to back with a more tonally accurate IEM with 2.75-3kHz as its primary peak (like Moondrop Kato). Regardless, Aurora’s forwardness is the major contributor to its clarity oriented signature as it brings softer instruments and smaller details in the background forward really well, and also establishes a good sense of depth.

Treble – Like the bass, Aurora’s treble changes with different ear tips and insertion depth. So, I highly recommend rolling your tips to find your favourite pairing. In general, Aurora has a dippy-boosty treble presentation. It dips in the 5-8kHz lower-treble, boosts mid-treble in the 9-12kHz region and then has warmer upper-treble post 12kHz. The mid-treble tuning adds a lot of excitement into the signature but the treble response overall is not the most linear. The lower-treble dip is sometimes noticeable in songs which have instruments with presence or harmonic content in the region. Treble extension is fairly average but it doesn’t sound too rolled-off at the top as the mid-treble boosts take care of adding in enough sparkle to keep everything sounding fun and interesting. Even though I’ve nitpicked Aurora’s treble tuning, it is no slouch and makes for a very engaging and exciting listen, so much that most of these nitpicks might not matter as much to most.

Technical Performance – Aurora has impressive instrument definition, imaging and detail retrieval chops for its price. Its forwardness and clarity shines a light on the softer instruments and background details quite well. Soundstage too is quite nice for an IEM its price. A lot of IEMs in this price range are rather intimate sounding but Aurora’s strong instrument definition and imaging chops help one focus on the hard panned softer instruments and details better, giving a sense of larger than average width and depth boundaries.

Right off the bat, Kato comes off as a slightly more neutral sounding IEM with a slightly more natural tonality, primarily because of its more accurate reference-style upper-midrange tuning with primary peak at 3kHz. Aurora doesn’t sound too off in tonality and you’d only notice this if you A/B them back to back. Overall, Kato has slightly more bass (especially sub-bass), slightly fuller lower-midrange, less forward upper-midrange, a slightly more even treble tuning and better upper-end extension. Both are fun and engaging IEMs to listen to in their own regard. Kato has slightly better resolution whereas both are similarly good at detail retrieval. Kato has a slightly fuller soundstage whereas Aurora has slightly taller width boundaries but dimensions of their soundstage aren’t too different.

Hana 2021 is similarly tuned to Moondrop Kato but has a bit more bass presence and airier upper-treble with a boost around 14kHz. As a result, Hana 2021 has significantly more bass than Aurora, by around 4dB. It not only has more mid-bass punch but also much more sub-bass rumble. Aurora’s bass tuning is more neutral in comparison and offers a more DD meets BA kind bass response – which has fast transients as well as good slam when the song demands. Hana 2021’s bass is exactly what you casually expect from a single DD – slam and punch with more analogue-ish, organic transients. Hana 2021 also has slightly fuller lower-midrange. Both have a forward upper-midrange presentation but Hana 2021 sounds slightly more accurate owing to its more accurate 3kHz primary peak whereas Aurora presents the same with a different coloured tinge, without sounding too off from reference. Aurora’s treble tuning depends on its mid-treble boost for sparkle and excitement whereas Hana 2021 relies on its airier 14kHz for the same. Both have a good soundstage as well as imaging and detail retrieval chops, with Hana taking lead in imaging and Aurora with a cleaner soundstage and taller boundaries.

Aurora is an IEM that most will appreciate for its clarity, musicality and engagement factor. It comes equipped with a variety of ear tips, a very nice 8 core cable, a nice case and most importantly – a matte finished, oxidised aluminium alloy shell that will probably last the test of time. In the competitive sub-$200 price segment, Aurora stands out as a nice clarity driven, fun-tuned alternative to the more neutral-balanced single DD IEMs like Hana 2021 and Moondrop Kato. Give it a shot if you’re in the market for a single DD IEM at its price!

Gear used for testing and review.

A professional musician, songwriter, record producer and audio engineer who likes to indulge in everything music - be it guitars, amps, studio or audiophile gear. Being an audio engineer and fascinated by audio technology, he is on an adventure of finding the most interesting products with the best sound, tech and value for money. View all posts by Animagus