I prefer to describe the DAP sound based on the comparison to other DAPs and pair ups with different IEMs/headphones since the DAP by itself doesn’t have a “sound”.  What we hear is how the sound characteristic of a source shapes the sound signature of connected IEMs/headphones or the difference in sound relative to other sources using the same pair of IEMs/headphones.  As a result, this section of the review usually summarizes what I find in the follow up Comparison and Pair-up sections.  Of course, this is my subjective opinion, describing how I hear it.

The original M8 set a high bar with its natural warmer analog tuning and more intimate soundstage presentation.  Thus, I’m sure, many were wondering about the direction of M9 tuning considering implementation of the same pair of AK4499 DACs.  But you have to keep the mind, DAC sets the baseline level of the sound, while the final tuning direction will be shaped by the amplifier section.  In my analysis of M9 tuning, I found that M9 carried over the warmth in the lower side of the frequency range with more weight and texture in the bass, deeper rumble, fuller body lower mids.  But it also counterweighted that with more transparency and revealing tonality of upper mids and airy controlled sparkle of the treble.

Every flagship release aims to swing the pendulum of tuning to the warmer or the brighter side of neutral reference.  Here, the bass and the lower mids are focused on taking that “swing” toward the warmer side of tuning, while upper mids and treble counterbalance it with a more revealing “swing” to add higher resolution, a bit less density, and improved layering.  M9 is not an improvement over M8 tuning, each one has their unique sound-personality, a different flavor of ice cream you might enjoy depending on your mood, or in this case, depending on pair up synergy with IEMs/headphones.  The improvement took a big step forward in the hardware performance, but the sound gives you a different flavor of tuning.

The soundstage is definitely above the average, expanding more in depth and height, especially depth, by projecting sound further out of your head.  It still keeps a bit of that intimacy found in M8, but it expands a bit wider relative to M8.  And airier treble of M9 helps with layering and separation of the sounds, which also shows the improvement in vertical sound dynamics, making the sound more expanded and less compressed.

Prime Mode is Shanling version of the pure audio mode where it kills a number of processes running in the background to optimize the performance of M9 for audio playback without streaming or access to other apps.  You can’t even get to the screen with your apps, only have access to Shanling audio player app.  The switch between Android and Prime modes is very fast, no need to reboot the DAP, also allowing you to go quickly back and forth to compare the sound.  In this comparison I found everything to be nearly identical except for the soundstage being noticeably wider and imaging being more 3D in Prime mode.

As expected, due to a difference in output power, I had to readjust the volume when going between BAL and SE sockets.  But other than that, the tonality and the technical performance were identical.

It Pass my hissing test without a problem.  Actually, what I noticed, during a playback at a normal listening volume, background is pitch black and I don’t hear any hissing.  But when I lowered the volume down to almost zero, I did hear a little bit of hissing with CFA Solaris.  But like I said, at a normal listening volume I hear zero hissing and pitch-black background.

Adding this test to my reviews since people often ask me if I hear any interference in sound when streaming with DAP next to my phone.  With M9 streaming Tidal and my S22 phone next to it, I wasn’t picking up any interference.

I was using Traillii and Jewel in this testing, volume matched in every comparison.  Also, please keep in mind, I’m mostly focusing on a different in sound.  Each DAP has its unique functionality with Pros and Cons.  Also, for a faster and more accurate DAP comparison, I was using Oriolus RaoSound 4.4mm analog switch.

M9 vs Shanling M8 (high gain, sharp roll-off filter, M8 volume V28 and M9 volume V24) – very similar imaging, but after going multiple times back and forth, I hear M9 sound to spread wider left/right, though imaging is similar.  The tonality between these two DAPs varies.  M8 has more coloring, more warmth which is noticeable in lower and upper mids, especially when focusing on vocals, and a little more weight in the low end.  In contrast, M9 is more transparent, more neutral, and less colored relative to M8. M9 still has a similar natural organic tonality, but it manages to achieve this level of musicality with less warmth and more transparency in upper frequencies.  Also, M9 has some improvement in technical performance, having a higher resolution, thanks to airier treble, and more expanded vertical dynamics.  Nothing is night’n’day, but I still find the improvement to be noticeable.  The rest of the changes is related to the actual OS performance while running the later Android, using a faster processor, having a more polished and responsive user interface, and implementing a higher output power.

M9 vs A&K SP2000 SS – at initial listening, I had to do a double take because of how close they sound, especially considering AK4499 DAC similarity.  I’m glad I was using a hardware switch so I can go quickly back and forth multiple times to focus on the differences.  There are not as many, but a few stood out.  Starting with the soundstage, it is nearly identical in every direction.  But to my surprise, the imaging is different, being more holographic in M9, and more center focused in SP2k.  Another noticeable difference was in treble, with SP2k being a little brighter and splashier in comparison to a slightly more natural tonality of treble in M9.  Other than that, the rest of the tonality and the technical performance are very similar.  Plus, you have to keep in mind fully open Android environment of M9 vs closed environment of SP2k.  I actually think, for those who want to upgrade their SP2k without too much deviation from the original sound, and with technical and tonal improvements, M9 is a very good choice.

M9 vs iBasso DX300 MAX SS – another comparison of AK4499-dac DAPs.  Starting with the soundstage and imaging, I found soundstage expansion to be nearly identical, but MAX imaging is a bit more holographic and multi-dimensional.  Tonality is different in this comparison.  M9 has a more neutral natural tonality while MAX has a more neutral revealing tonality.  I do hear a little more weight and impact in Traillii paired up with M9, while with MAX the bass is a bit more neutral in comparison.  Mids in M9 are more organic while MAX mids are brighter, more revealing, more micro-detailed, and slightly more forward.  Of course, this comparison is being made relative to have I hear it with Traillii and Jewel.  Treble also varies, with MAX treble being crisper and brighter, while M9 treble also being well defined, but smoother in overall tonality.  Both of these DAPs have a fast Android performance, but the size and the weight of MAX makes it less portable and more transportable, while M9 is more portable and pocket friendlier.

M9 vs Sony WM1ZM2 – the new ZM2 golden brick is making its debut in my comparisons, and the tables have flipped here.  First of all, let’s start with soundstage and imaging.  Imaging I found to be very similar, but soundstage is a bit wider in M9.  Tonality is where ZM2 sounds more organic, smoother, a touch warmer, with an even stronger bass punch.  M9 still sounds natural and detailed, but relative to ZM2, M9 has a bit less coloring in mids, giving the sound more transparency.  In contrast, ZM2 gives the sound more musicality.  Their technical performance is not too far off.  Despite a difference in tonality, they both have a nicely layered sound with high level of resolution. But if you want a natural tonality with more transparency in mids, go with M9.  While if you want a natural tonality with more organic warmer mids and more impact in bass, ZM2 is a good choice.  They are both running on open Android, but faster processor of M9 makes interface snappier and more responsive.

M9 vs Cayin N8ii – With N8ii in SS output, the sound performance of M9 and N8ii is not too far off, from the technical performance of the soundstage expansion to layering and separation of the sounds.  But with SS output, N8ii tonality is just a little more revealing in comparison to a slightly warmer tonality of M9, especially when analyzing mids/vocals.  But once you switch N8ii to Tubes, and then play around with Class A vs AB amp mode, the N8ii now sounds smoother and with a bit fuller body in mids when compared to M9.  Based on this, M9 tonality is somewhere between SS and Tubes of N8ii.  Both have a fast Android performance, and both are on a large size with a bit more heft. 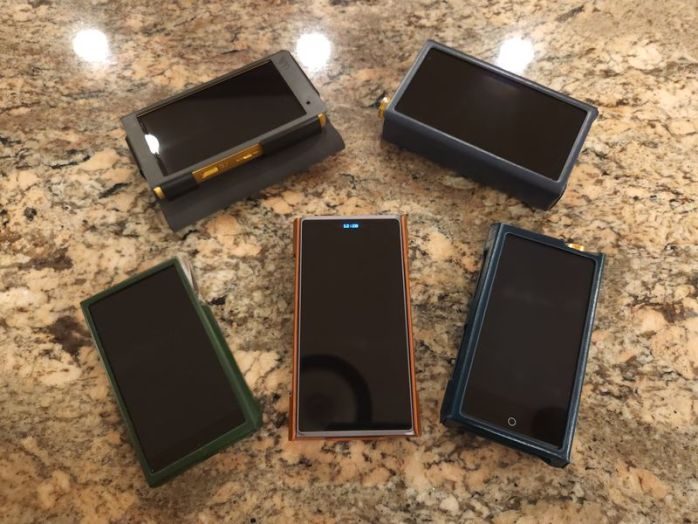 Page 3 – Pair up with Headphones and IEMs.
Page 4 – Wired/Wireless Connections and Conclusion.