Inside Pro-X you have Ingenic X1000 processor, common to many smaller non-Android DAPs.  But the star of the show here is a dual ES9219C DAC, a step up in comparison to a single ES9218P in AP80 and dual ES9218P in AP80 Pro.  The 3.5mm output has the power rating of 70mW @ 32ohm load, while balanced 2.5mm steps up to 190mW @ 32ohm, plenty of power for IEMs and some efficient headphones (and even harder to drive ones).  A step counter also available, built-in pedometer sensor (KX126), while FM radio found in Pro model is no longer there.  Pro-X is great for users with active lifestyle.  It can also display a clock and offers eBook reader.

You will find bi-directional Bluetooth 4.2 supporting many protocols, including aptX, LDAC, and even the new UAT (ultra-audio transmission).  The BT is bi-directional, meaning you can use it as a transmitter to pair up with your wireless headphones or other BT DAC/amp devices.  Or you can use it as a receiver to function as a wireless DAC/amp paired up with other sources.  For example, you can pair it up with your smartphone to stream audio from various apps wireless to your Pro-X using lossless LDAC protocol.

The internal battery capacity of Pro-X is the same 800mAh, 3.8V LiPo battery as in other AP80 and Pro models.  According to Hidizs, this should give you 8-11hrs playback from 3.5mm and 6-8hrs playback from 2.5mm.  The time duration will depend on volume level, type of files, and screen-on time.  I didn’t have a chance to run battery test, so will update this section of the review when I get to it.  And of course, keep in mind, when you start playing lossless files or go up to DSD format, the battery will drain faster. 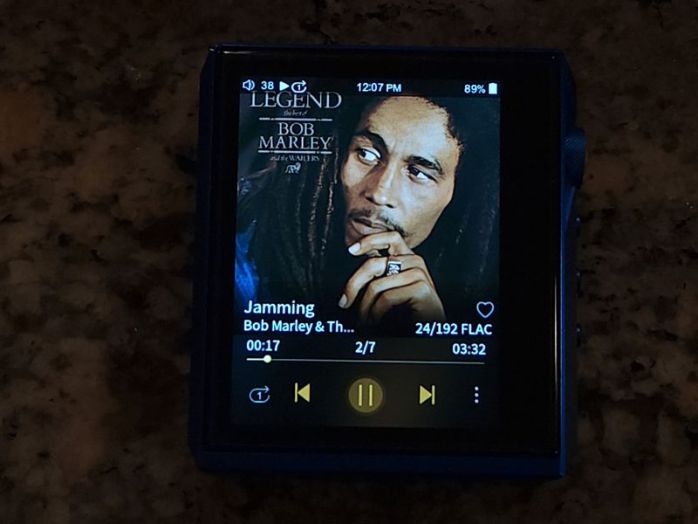 The operating system under the hood is Hiby 3.0 OS which is based on HibyMusic Player, including all of its bells’n’whistles, even Mage Sound 8-ball DSP effects and EQ with genre specific presets and custom adjustment.  And because you are running Hiby, you can also use HibyLink to control Pro-X wireless from your smartphone.  Many lossy and lossless audio formats are supported, such as FLAC, APE, WMA, WAV, ALAC, DSF, DFF, SACD-ISO, and native support of DSD 64/128/256 and PCM up to 384kHz/32bit. 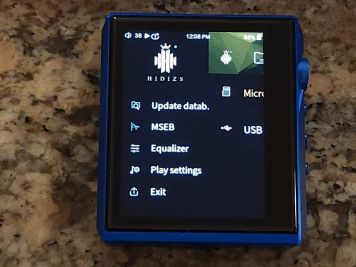 The original AP80 supported only up to DSD128 native decoding, while Pro and Pro-X added a dedicated HBC3000 FPGA for DSD decoding, taking it up to DSD256 which I confirmed to play without a problem.  I will cover more about this in Sound analysis section, but as a spoiler, DSD playback of Pro and Pro-X actually has a higher sound quality than original AP80. 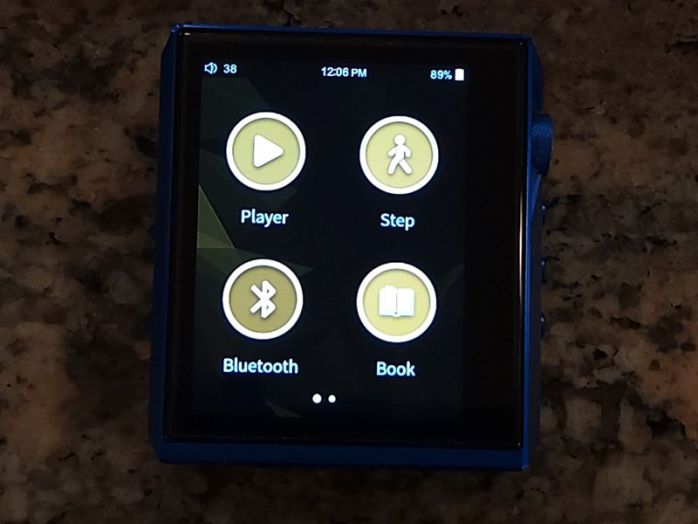 When you start the DAP, you can see the main navigation screen with icons of Player (HibyMusic), Step (step counter), Bluetooth (wireless controls), Book (E-Book reader), System setting (lots of options), and About.  When you start Player, you are dealing with a scaled down version of HibyMusic which many are already familiar with.  Also, swiping the display up (like a navigation bar from the bottom) brings up controls for playback, volume and brightness adjustment, and shortcuts to toggle Bluetooth, switch between H/L gain, toggle between USB modes (storage, audio, dock), and Line Out (enable/disable).  Tapping BT shortcut turns it on and off, while tapping and holding it brings up BT setup window.

I prefer to describe the DAP sound based on the comparison to other DAPs and pair ups with different IEMs/headphones since the DAP by itself doesn’t have a “sound”.  What we hear is how the sound characteristic of a source shapes the sound signature of connected IEMs/headphones or the difference in sound relative to other sources using the same pair of IEMs/headphones.  As a result, this section of the review usually summarizes what I find in the follow up comparison and pair-up sections.  Of course, this is my subjective opinion, describing how I hear it.

In many different pair ups I tried, I noticed Pro-X sound sig to be mostly neutral with a tilt toward a more revealing transparent tonality.  The sound is still natural but has more focus on upper mids with an extra sparkle in treble and more neutral slightly leaner body.  The sound is not congested and actually has a pretty good level of detail retrieval.  While being an entry level DAP, don’t expect high level of technical performance when it comes to layering and separation of sounds, or to have the sound dynamics on the level of upper mid-fi or flagship DAPs.  That’s just not a realistic expectation.  But sound was very clean, clear, and detailed, doesn’t feel compressed or congested, with black background, and surprisingly very good soundstage expansion and imaging, especially from the balanced output.  Also, similar to AP80 and AP80 Pro, Pro-X sound in low gain was a bit dull and was lacking clarity and energy, especially in upper frequencies.  Once you switch to high gain, almost in every single pair up the sound came alive with more clarity in mids and more expanded soundstage width.  After that, I didn’t even bother using low gain.

Pro-X performed quite well in many pair ups.  For example, both Oriolus Traillii and Aroma Jewel had a wide-open balanced sound with a good bass extension, a bit polite texture in low end, clear detailed mids, especially good with Traillii, and well-defined treble with an airy extension.  Jewel did lack a bit of its usual DD texture, but bass was tight and articulate.  CFA Solaris had a relatively black background, balanced tonality, a little more revealing in mids, while treble had a nice well controlled sparkle.  FirAudio XE6 also had some improvement in mids, more clarity with a good retrieval of details, though bass lost some of its weight.  One big surprise was ATH-R70x open back 470ohm, 99dB headphones, those are hard to drive, yet Pro-X in balanced output drove it comfortably at 60/100 volume.  Perhaps, bass wasn’t as powerful, but the sound was balanced, natural, more revealing, yet still not bright or harsh.  If you like extra bass weight and texture, you will have to play with MSEB effects to enhance the bass.  Or if you have brighter tuned IEMs, especially with peaky lower treble, Pro-X can push it a bit over the threshold.  But with neutral or warmer tuned iems, the pair up was great.  Even brighter tuned IEMs paired up OK, as long as the treble is not too forward to begin with. 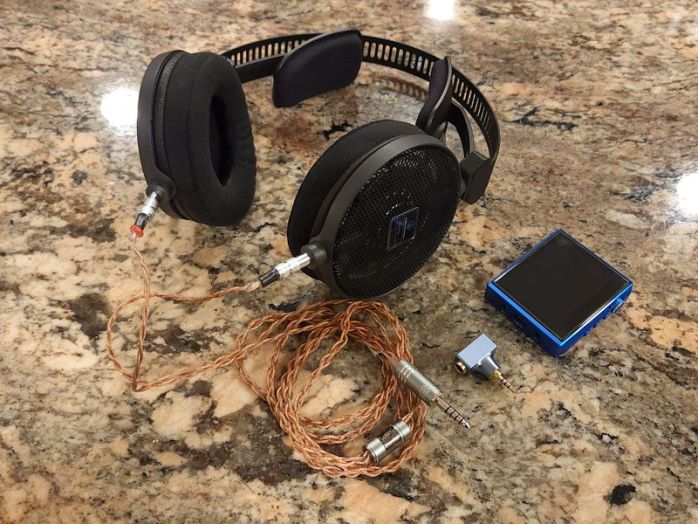 I found this to be a big deal.  A lot of the usb/dac dongles don’t even offer MQA decoding, and some only offer a basic 4x unfolding.  ES9219C used in Pro-X has a built-in MQA hardware rendering and 8x decoding.  AP80 Pro supported only 4x, while AP80 Pro-X steps up to 8x.  When comparing Pro and Pro-X, side by side as USB DAC connected to my laptop while streaming Tidal, I’m hearing a very noticeable difference and improvement with Pro-X soundstage expanding a lot wider, imaging becoming even more 3D holographic, and the vertical dynamics of the sound being more expanded.

When I reviewed AP80 Pro, I remember being impressed with its DSD playback, so wanted to make sure the same holds true with Pro-X model.  And it is, I still hear a noticeable difference when playing DSD files, with a more dynamic, more layered, more multi-dimensional sound.  In comparison, the original AP80 playback using the same DSD files sounds flatter.

In this comparison of Pro-X SE vs BAL output, there is a noticeable difference in output power where I had to raise volume by 5-6 clicks going from BAL to SE.  Also, there is a difference in soundstage, with BAL being wider.  Other than that, everything else is the same.

Also, in a lot of my testing I was using DDHifi DJ44B 4.4mm to 2.5mm small adapter, allowing me to use my 4.4mm cables with Pro-X.  DDHifi adapters and interconnect cables are essential part of all of my review work.