Manufacturer website:  Cayin, for sale on MusicTeck and Amazon.

I used to consider saturation of DAP market as a good thing.  After all, competition should benefit consumers and challenge manufacturers to introduce more innovations to stand out from the crowd.  But too much “saturation” can have a negative effect.  Today, DAP market resembles smartphones, and even worse.  Seems that every few months there is yet another release, and the focus shifted from improving audio quality to adding more features, resulting in compromises.  I’m sure many manufacturers feel frustrated too, but I think it affects even more the consumers who spend months researching and comparing, ready to pull the trigger, and then something new is announced and you are back to square one.

I was excited last year when Cayin announced their upcoming i5 DAP, and appreciated their honestly when the release was delayed to fix wifi interference problem.  Having tested and reviewed C5, N6, and N5, I always held Cayin in high regard and found them to have solid releases with unique design and great sound quality.  As a matter of fact, ever since I received i5, about 4+ months ago, I have featured it in most of my headphones and DAP reviews as a source and for comparison.  Unfortunately, while waiting for more fw updates and under a flood of other review samples (and a few things in my personal life, as many have probably noticed I slowed down with reviews), I never got to write a full i5 review and now deeply regret it.  There are no excuses, though this is not going to be my usual long review, but rather a shorter version (by my standards since I won’t be going into a massive comparison and pair-up report).  I believe i5 deserves another ray of spotlight, so here we go!

Like their previous products, the packaging is not too flashy but still has a very informative presentation with a bold image of i5 on the front (focusing on that unique volume wheel) and the list of key features/devices on the back to give you a quick design overview. 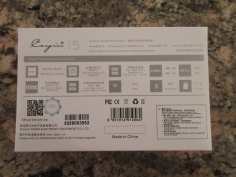 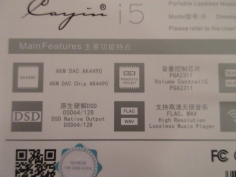 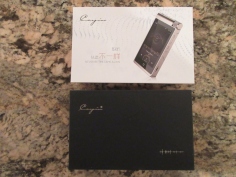 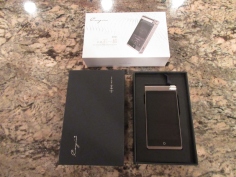 Accessories include USB-C to USB data/charging cable (yes, i5 broke the mold and moved to USB-C), the micro-usb to USB-C adapter (to be able to utilize all your current micro-USB cables at home), screen protectors for the front and the back, and the user guide with a warranty card.  I also received their original leather case (probably pleather) that offers a basic scratch protection, though after a while it felt a bit loose so I had to mod it with a few sticky notes under the cover on the back to “fix” that.

Later, Cayin released two optional accessories, a high-quality USB-C to Coax cable (a beautifully crafted premium cable with a braided clothe sleeve, high quality branded connectors, and a cool storage gift box).  They also made available another more premium leather/pleather case; this one had a tighter fit (no more accidental nip-slip out of the case), a higher quality better touch material, and a distinct red stitching finish.

Perhaps the new case is not of the same caliber as $60 Dignis, but for $25 it’s an excellent solution to protect your i5 from scratches and to enhance the grip when you are on the go.

Premiums case (with a comparison to the original one). 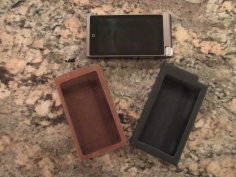 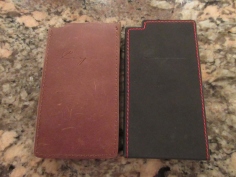 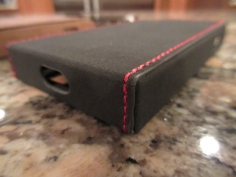 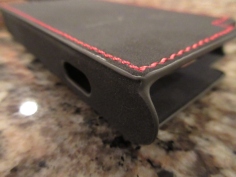 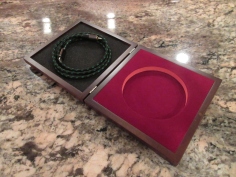 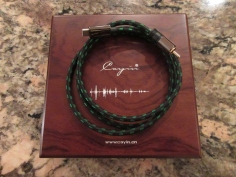 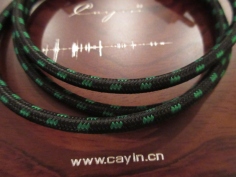 Some Android based DAPs with a large touch screen fall into a trap of looking too smartphone-generic.  Thus, different manufacturers are trying to spice up the design with beveled or non-symmetric edges or the addition of analog volume control wheel.  Cayin decided to stand out from the crowd with its own unique wheel design in the upper right corner of the unit.  The wheel feels very solid and has enough friction where you will need two fingers to turn it, the only time when I feel like I need to use two hands for operation.  It’s not super tight, but just enough resistance so you don’t accidentally bump the volume when i5 is in your pocket.

The metal frame of the DAP is CNC machined from aerospace aluminum alloy, with a front of i5 covered by a glass with a touch screen display (3.97”), including “home” touch button at the bottom, and the back having a traditional Cayin carbon fiber plate.  The unit itself has dimensions of about 126x64x14mm with approximately 196g in weight – feels very solid and comfortable in your hand with a bit of heft, but I still prefer to keep it inside the case since metal frame and carbon fiber back can get slippery.

The sides of i5 are elegantly carved with sexy lines where you can find on the left in the upper corner a power button, and on the right in the upper corner transport buttons (separate skip next/prev next to each other and next to them a play/pause).  On the right at the bottom you will find micro-SD card slot (listed as “up to 200GB” but should be supporting 256GB since it was introduced later).  The bottom of the DAP has USB-C port to charge, transfer data, connect coax cable, and for usb-OTG storage connection (still looking for a small usb-c otg thumb drive).

Keeping up with a cylindrical design of the volume pot in the upper right corner, the top of i5 follows the same rounded edge shape which blends in with a volume wheel.  At the top, you will also find 3.5mm headphone jack.  Unlike N5, i5 offers only single ended headphone port.  Next to it is the Line Out output to bring out output of its AK4490 DAC to external amp connection.  I gotta admit, with a symmetric positioning of identically looking 3.5mm jacks, I had to pay careful attention not to plug in headphones into LO.  Perhaps, a little port dust plug is a good solution in this situation.

Other key hardware design features under the hood, in addition to AK4490 DAC carried over from N5 design, are 32GB of internal flash memory, 1GB of RAM, quad-core Cortex A7 processor, 4800 mAh battery (giving around 10hrs of playback time), and support of Bluetooth and WiFi under Android 4.4 OS (optimized by Hiby who collaborated with Cayin on this design).  With a selection of quality op-amps and buffers, i5 is designed to drive about 190mW of power per channel with 32ohm load – plenty of power even for some demanding headphones (no issues driving my planar magnetic PM3, EL8C, or 470 ohm R70x).  While <1ohm output impedance is a good news for multi-BA IEMs, but keep in mind that hissing will be noticeable with sensitive IEMs. 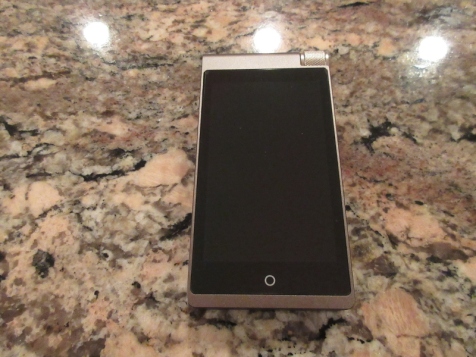 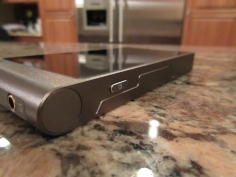 Unlike some other Android based DAPs with audio app running on top of a regular Android OS, here Cayin along with Hiby took a different approach with “Android” being on top of the audio app.  Once you boot up i5, it looks like a typical DAP with a dedicated audio interface.  You are greeted with a main music page Folder view with options to access internal memory, micro-SD card, and “Cloud” with either Dropbox or LAN connections.  You can also switch to Album, Artist, Genre, and Tracks view.  Or click on List view to see your Favorites, Frequently Played, Recently Played, and Playlist.  There is also an option to do a full search which brings up QERTY android keyboard (just like in a smartphone).

Swiping notification bar down (typical Android feature), you get a quick access to WiFi, Bluetooth, Gain setting, USB Mode (keep in mind, i5 can operate as USB DAC too), Idle shutdown, and Scheduled power off.  Here, you can also adjust the brightness level of the screen and the screen time out, as well as being able to access the full Android Settings menu by clicking on the upper right corner Icon.  People with Android phones will feel here just like at home, iOS users will need to spend a little bit of time getting used to it.

So, where are the Android apps?!?  You will find it in a secluded section under Third-Party applications which opens a new screen with installed apps, including Google Play store.  For a better management of the memory (only 1GB of available RAM after all), Advanced Task Killer is already pre-installed and built into the bottom of the screen for a fast access.  I have installed a small handful of apps, such as Spotify and a few games.  Everything seems to be working as expected, though I do want to note that download is on a slow side (especially when you downloading OTA fw updates).  I have free Spotify and found no issues with streaming.  Cayin already mentioned about a known issue with Tidal streaming which is not entirely under their control, and now waiting for a final resolution.

Unfortunately, that is a problem with Android support.  Now, your users are tapping into the 3rd party apps which can slow down or crash Android OS, something which is not under control of Cayin.  Thus, it becomes a double edge sword.  Customers are asking for streaming, so manufacturer builds their OS on Android platform.  But that also opens a can of worms with people installing various apps which are not under control of the manufacturer (Cayin).  When something doesn’t work, people blame the manufacturer who has nothing to do with this since they are not developers of the app.

The only thing they are in control of is the main DAP interface and the Playback screen which has been designed with a collaboration of Hiby, a company which has a lot of experience in audio apps and writing audio drivers to bypass Android SRC (sample rate conversion where OS down-samples audio files as a common denominator to all other apps accessing the audio).  The main Playback screen has a very clear layout with upper top half of the screen occupied by a song artwork (if one is available) which could be switched to lyrics view (if embedded with a song) or a very elegant Stereo VU Meter.  Underneath you have selection of different loop modes (single, repeat, random, etc.), shortcut to access EQ, view the list of songs in a current playback folder, and being able to add to favorites.  Below is a display of a song/artist name and playback controls with Skip Next/Prev on the sides a Play/Pause in the middle of a circle with a playback time marker.  Interestingly, to scrub through the track, so you can fast forward to a specific time in the song, you must touch and glide your finger around the circle edge.  It’s a neat graphic feature, but also a bit awkward since as you moving the finger you partially blocking the circle where the time marker is located.  I wish there would have been an alternative layout to have a straight fast forward scrub bar.  Also, as a general comment, the touch interface is not super responsive, and I sense a bit of a lag. 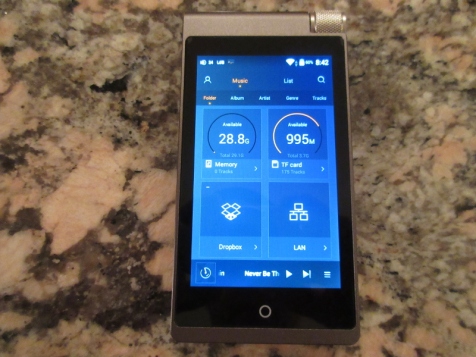 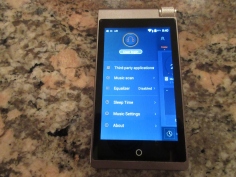 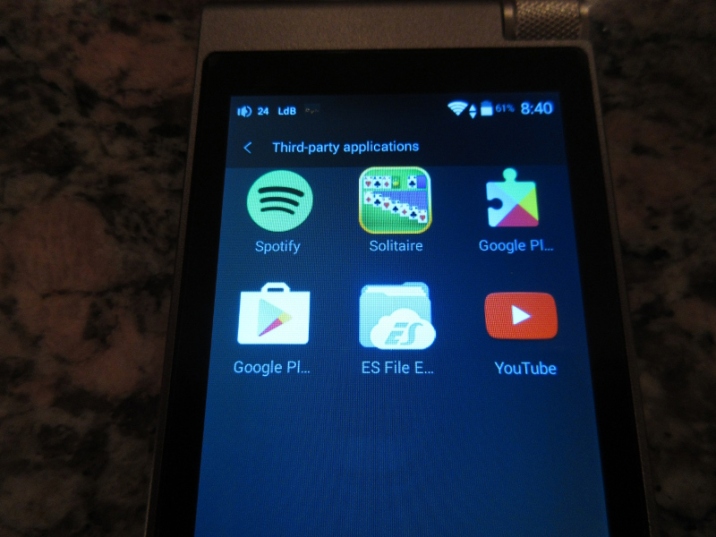