I was a bit surprised when Hifiman asked me if I’m interested to check out their upcoming TWS800 true wireless stereo earphone considering that I mostly focus on testing and reviewing higher end wired IEMs and DAPs.  Besides, I wasn’t even familiar with their previous TWS600 model, but the more I thought about it, the more I became curios and decided to give it a shot!  Once TWS800 arrived and I spent the last week with them “glued” to my ears, I decided to put together a write up because it wasn’t just another generic pair of consumer-grade TWS.  As a matter of fact, TWS800 shares Topology Diaphragm advanced driver design similar to RE800, perhaps the reason why this wireless model number is also 800.

Prior to receiving TWS800 I tried to Google the spec, but only gathered bits and pieces since it is not officially listed yet.  Thus, I was looking forward to see the packaging, in hope of reading the actual spec, but to my surprise it was quite vague as well.  The cover of the compact box it arrived in had a clear picture of TWS800 and the case and mentioning of “amazing sound quality”, while the back had a few bullet points about functionality.  This made me only more curious about it.

Inside, you have a soft foam insert with cutouts for IEMs and the charging case.  And I mean it when I say IEMs because they did look like higher end IEMs, even kind of reminding me of their RE1000 CIEMs.  With foam insert out, you can see a number of included accessories, such as usb-c charging cable, a storage velour drawstring pouch that was big enough to fit charging case, a warranty card and a very detailed manual, and a ton of eartips.  Hifiman mentions 8pairs, while I counted 9 which could have been due to one already on earpieces.  Those were S/M/L black silicone, M wide bore black silicone, S/M/L double flange black silicone, L triple flange black silicone, and L deep single flange white silicone tips.

Keep in mind, manual is VERY important since TWS earphones have different controls, so make sure you don’t throw it away. 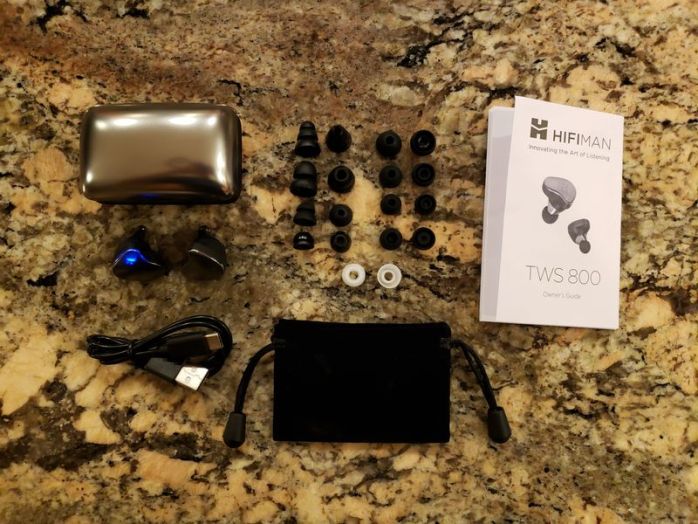 As I already mentioned, the exterior design of the shells has a more “audiophile” look, typical of higher end IEMs rather than airpods clones or fancy consumer earpieces that fit entirely in the concha area of your ear.  The faceplate has a stainless-steel finish, matching the charging case, with a Hifiman logo and multi-color LED indicator.  The inner part of the shell has rubbery-plastic material that changes to SS finish toward the nozzle which has a lip (to secure eartips from sliding off) and a mesh cover at the tip.  There were also 2 charging contacts toward the edge, and L/R marking.  Obviously, this is not a heavy SS but rather some lightweight aluminum alloy or whatever the material is, just with SS finish.

The earpieces itself are pretty lightweight, only 6.9g each, and the size is just average, around 25.6 x 20.2 x 27.6 mm.  What I found to be quite useful is the actual shape of the faceplate and the shell, allowing me to hold these earbuds with a secure grip without pressing the touch control on the faceplate.  And the same goes when TWS800 were in my ears and I needed to tap the faceplate, being able to grip the shell with two fingers without accidentally touching the faceplate.  I know, we don’t always think about this aspect of design ergonomics, but with some of the other TWS I tried in the past I always end up touching controls when pushing shells into my ears.  Here, I didn’t have any problem at all, plus, they stayed securely in my ears even while moving around.

The charging case is a nice-looking clamshell with a matching SS exterior finish.  Inside you have 2 cavities for earpieces, aligned with charging contacts, deep enough to accommodate TWS800 with different size/shape eartips, and with a strong enough magnet to hold them securely inside while charging.  There was also 4-LED indicator to show the status of charging case battery.  My complain with a case is about charging LED indicator being visible only when case cover is open.  When it is closed, you don’t have access to see any LED indicators and don’t know if case is charging or already done.  Plus, it would have been nice to have Qi wireless pad charging capability in addition to usb-c charging port.  Neither of these are showstoppers, but at least LED indicator would have been nice to have.

Regarding what is “under the hood”.  As I already mentioned, there is no full spec about actual drivers or wireless chipset, almost like Hifiman wanted to treat TWS800 as a “black box” so people would focus on the sound rather than components.  But I was still able to find some info about the design.  Don’t know how relevant this is, but TWS800 drivers actually have 150ohm impedance, more than double of RE800 IEMs 60ohm impedance.  Of course, impedance doesn’t matter because you are not driving it from your DAP.  But instead, these TWS use a built-in independent amplifier to drive TWS800 to its full potential as intended by Hifiman design.

One thing Hifiman did mention about drivers, they use Topology Diaphragm, similar to RE800/RE2000 design.  I know RE models use 9.2mm DD, but I don’t want to speculate if TWS800 is the same.  What makes these drivers unique is Nano particles coating (based on Dr Fang Bian Ph.D. thesis) applied in special geometric patterns.  What Dr Fang discovered is by varying the surface pattern and using different Nano materials (each with its own unique property), you can control the acoustic performance of the driver.  If you think about it, you literally micro-tuning the sound by applying a different Nano coating pattern.  Plus, the structure of Topology diaphragm also reduces uncontrolled distortion typical of dynamic drivers.

And last, but not least, is the battery performance.  At full charge earpieces will last about 4.5 hours of playback, and the charging case (with its 800mAh battery) will give you another 27 hours.  Basically, you can get close to 6 full charges from the case.  The total charging time of earpieces with a case is up to 2hrs, and you also get 120 hours of standby time. 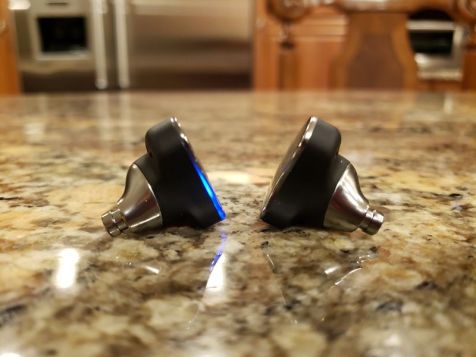 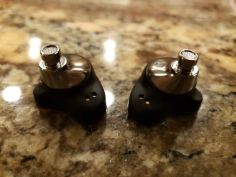 I wasn’t able to find what exact wireless chipset TWS800 is using, but I do know it supports Bluetooth 5.0, Class 2, and also 2 codecs: SBC and AAC.  I don’t know if this is a limitation of the chipset, but it would have been nice to see support of aptX like in other TWS.  Actually, to my surprise, even AAC yielded pretty good sound performance which I going to cover in the next section of the review.

Regarding pair up itself, it was effortless.  With TWS, once you take them out of the case, they go automatically into pair up mode and you can easily discover and connect with any and every source I tried.  Plus, I was able to have a solid connection about 30ft away from the source in the open space.  And it also worked through the wall when I went into another room, around the corner from where the source was sitting. 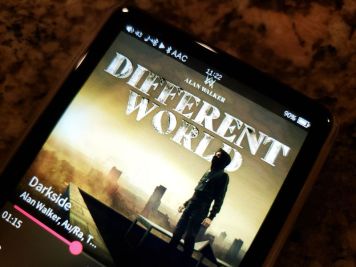 I used TWS800 with apps playing local audio files, streaming Qobuz and Amazon Music HD, watching YT, Netflix, etc.  The audio and video were always in perfect sync, and in most of the cases I was able to control playback and adjust volume remotely without a problem.  I will cover that also in more details later in my review.

And speaking of controls, I was pleased that TWS800 offers playback (play/pause/skip) and volume controls.  Volume adjustment seems to be rare with TWS.  Also, while reading the manual, it says that triple tap on R side skips Next, while I found the opposite which is less logical but still not a showstopper.

During phone calls, which, btw, have just an average quality with TWS800: