I didn’t talk much about FPGA functionality in P6 design since this info only became available to me now.  According to L&P, most of their audio players (L5, L3x, L6, L4, LP6x, and P6x) feature FPGA to optimize performance by running independent processes in parallel with master controller.  But it was never a big focus of discussion until LP6 where ultra large-scale Intel FPGA with more functionality was utilized in the design.

I don’t know the exact details of FPGA used in P6, L&P only mentioned it is from a domestic brand manufacturer.  Also, Luxury & Precision R&D team is the one who writes and optimizes all FPGA code.  I think some will find it interesting to read about the functional tasks implemented in that FPGA:

The last one is a very interesting feature with the first profile already released for JVC HA-FW10000 IEMs.  I don’t have these IEMs to test, but hoping they will release more in the future for other popular IEMs.

One difference I found was in Key Setting menu which offered similar to P6 menu control setting of using Knob, Media control, and Knob + Media control, and additional option to Disable these in favor of using only the touch screen navigation in P6 Pro.  And due to touch screen, now you will find Return to previous screen touch shortcut at the top of setting screens.

The other big difference was in the Playback window due to implementation of touch controls.  All the elements from P6 playback window are still there, including L/R power meter, display of bit depth and sampling rate of the song, thumbnail of album art if one is embedded, format of the track, and the timeline of the song.  In P6 Pro window, you get Return to the previous screen shortcut in the upper left corner and System setting shortcut in the upper right corner.  Plus, Play/Pause touch button and Skip next/previous buttons at the bottom of the screen.  And my personal favorite – being able to fast forward/back through a song by swiping the timeline bar. 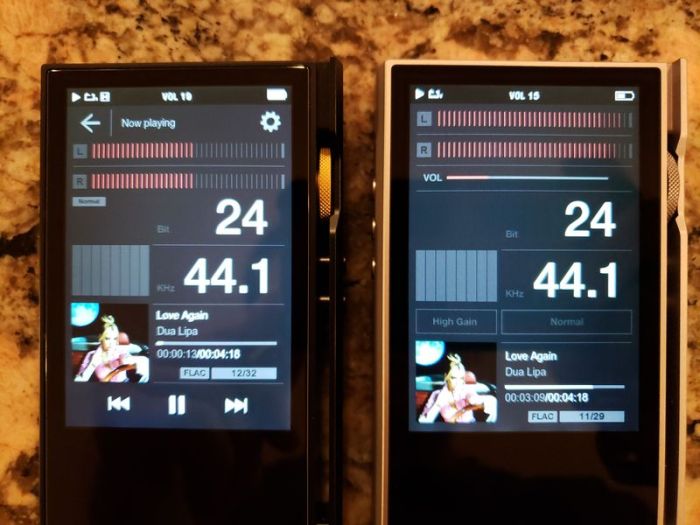 I do wish the timeline swipe bar would be a little longer, but for those who are familiar with previous L&P touch screen models, this is a big step forward.  I know, some going to raise their eyebrows after reading this, but L&P DAPs were always about minimalistic GUI, optimized system resources, and the focus on audio performance.  Touch screen interface where you can swipe forward through a song and Bluetooth Rx mode with LDAC is a big step forward for them.

Page 3 – Sound Analysis and Comparison.
Page 4 – Pair up and Conclusion.