I analyzed P6 Pro sound mostly with EE Odin, and also 64 Audio U18t, CFA Solaris, and MEZE Audio Empyrean while playing a variety of my favorite test tracks, such as Agnes Obel “The curse”, Sandro Cavazza “So much better” (Avicii remix), C-Bool “Never go away”, Ed Sheeran “Shape of you”, Alan Walker “Darkside”, Galantis “Hunter”, Iggy Azalea “Black widow”, Indila “Boite en argent”, Dua Lipa “Love again”, Counting Crows “Big yellow taxi”, David Elias “Vision of her”, and Michael Jackson “Dirty Diana”.  I let P6 Pro burn in for about 200hrs before starting my sound analysis.  People have different opinions about the effect of burn in, but to my ears out of the box the sound was leaner, especially in treble, and after about 100hrs it became smoother and more natural.

I prefer to describe the DAP sound based on the comparison to other DAPs and pair ups with different IEMs/headphones since the DAP by itself doesn’t have a “sound”.  What we hear is how it sounds through IEMs/headphones connected to it or the difference relative to other sources using the same pair of IEMs/headphones when monitoring the sound. As a result, this section of the review usually summarizes what I find in the follow up Comparison and Pair-up sections.  All my sound analysis was done with NOS (non-over-sampling) digital filter which I found to yield the most natural tonality.

I found the overall tonality of P6 Pro remained the same as P6, but technical performance scaled up.  L&P claim about doubling the dynamic range and improving SNR are not just a marketing gimmick.  The improvement in micro-dynamics and blacker background are quite noticeable and I will cover it in more details in Comparison and Pair up sections of the review.  But as far as tonality and other parts of sound analysis goes, my original P6 description is still applicable with a few updates I have included below.

If I would to summarize the sound of P6 Pro in one sentence, I would describe it as having a resolving natural tonality with a smooth reference sound that has a rather subtle delicate coloring.  Basically, the sound is just very clean and effortless, detailed, layered, but not micro-detailed and with just a moderate amount of air between the layers.  It almost feels like a digital edge was taken off the sound to give it a more analog smooth texture, yet the sound doesn’t feel warm and smooth where it loses the resolution.  It sounds very natural, non-fatigue, and realistic, especially when you focus on rich timbre of instruments and natural tonality of male/female vocals.

One thing that stands out, considering smooth nature of the tonality, the black background with a very low noise floor, making every note’s on/off transition clean and precise, giving the sound more clarity.  While it was true in P6, now it is even more apparent in P6 Pro.  The difference here is that it actually makes the sound feel tighter and faster in P6 Pro.  I will cover this in more details in my P6 vs P6 Pro comparison.  Very low noise floor is greatly appreciated when listening to sensitive IEMs where the background is dead quiet.  And this low noise floor and clean background also enhances the vertical dynamics of the sound expansion, especially micro-dynamics.  I also noticed in many pair ups it enhanced the punch and articulation of the bass, giving it more power without changing the sound sig.

Also, in many pair ups I found soundstage to be very wide and deep, approaching the level of spacious holographic expansion.  Of course, it will depend on technical capability and limitation of earphones and headphones you pairing P6 Pro with.  In some pair ups it reached nearly 3D imaging level with a very precise placement of instruments and vocals.  Yet, the soundstage and imaging still remained natural and not exaggerated.

I had quite a few flagship comparisons in my original P6 review, while here I decided to focus on only two, keeping it in a family between L&P DAPs, P6 vs P6 Pro and P6 Pro vs LP6 Gold.  Other comparisons in my original review are still valid, but I figured more people will be interested to find out about the difference in sound between P6 and P6 Pro and also their other LP6 flagship.

P6 vs P6 Pro – It is not hard to distinguish P6 vs P6 Pro even in a blind test when you listen very close because Pro has a blacker background which makes details pop out of blackness with a faster transient response of note on/off.  I went back and forth many times and while tonality it similar, the fast clean edge of the notes makes the sound tighter and more controlled, resulting in a perception of the bass being faster, and having a more articulate and even slightly stronger mid-bass punch.  For example, while testing with Odin, sub-bass rumble is very similar, going deep and being quite pronounced, but in P6 the decay of the bass is slower, making bass a little more relaxed, even slightly laidback.  In P6 Pro the decay of bass notes sounds shorter, giving the bass (mid-bass) better control, more punch, more power, and cleaner edges.

There is also a noticeable difference in dynamics of the sound.  Both have a very good macro-dynamics to track a dynamic change in sound level between different parts of the song.  But the micro-dynamics handling is much better in Pro to track the transients of smaller changes within the same part of the song where you have multiple instruments mixed together.  Don’t get me wrong, the sound is not congested in P6, but when you start analyzing the layers and their separation where micro-dynamics plays an important part, Pro handles it better.

The noise floor is noticeably lower and the difference is quite obvious when dealing with sensitive IEMs.  I tried CFA Solaris playing Agnes Obel “The Curse”, neither one has hissing which is great, but with Pro in the first 15sec of the intro you can hear more subtle sound nuances which are not as obvious in a regular P6.  Maybe I am splitting hairs but it was a great exercise with consistent results where I can pick P6 vs Pro in a blind test. 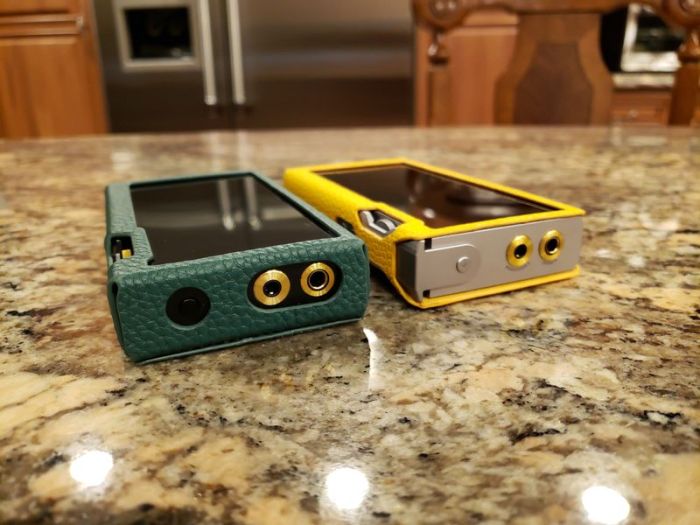 P6 Pro vs LP6 Gold – The soundstage expansion is similar, sounds holographic, but LP6 stretches it a bit wider, including improvements in imaging, but it wasn’t as drastic and will depend on IEM.  Both have a black background and fast transient response of notes on/off with clean/sharp transition edges.  While there is a difference in P6 vs P6 Pro, with LP6 vs Pro the performance is very similar, including very similar vertical dynamics of the sound.  Tonality is not too far off either, having a natural fuller body sound, but upon closer listening you can pick up the difference with LP6 having fuller body mids, giving vocals a little more body, and also LP6 bass having more rumble and impact.  This could be all part of higher power output and how it affects the pair up synergy with IEMs and headphones under test.  Also, in some pair ups I noticed LP6 having a little more sparkle in treble.

The design is quite different with P6 Pro having all discrete R-2R DAC while LP6 Gold having 2x R-2R DAC integrated chips (LP6 Ti has 4x of these chips).  Both feature touch screen, but to my surprise you can’t fast forward by swiping through the song in LP6 while you can do that in P6 Pro.  If you are planning to use hard to drive headphones, LP6 will be better suited for this task since it was designed to drive even HD800S to its full potential.  P6 Pro can drive some demanding headphones as well, but you do have to push the volume. Also, P6 Pro is lighter and slicker and has BT Rx which allows it to work as a wireless DAC/amp to stream audio from your smartphone, while LP6 is not capable of it.  In general, I find P6 Pro to be suited better for IEMs and more efficient headphones, while LP6 has a bit too much power for IEMs, especially sensitive ones, maxing out the volume at a very low setting.

Page 4 – Pair up and Conclusion.