The product was provided to me on a short-term loan for the review purpose in exchange for my honest opinion.

While Oriolus as a company has been around since 2015 and had various IEMs, DAPs, and portable Amp releases, IMHO what really put them on a global map is their recent mega kilo-buck release – Traillii, a.k.a. the Bird.  And I’m not talking about FOTM hype that faded away within a week or a month.  I reviewed Traillii in November of last year, and 10 months later people are still talking about it, still buying it, and still in shock that high demand drove its price higher to $6.6k sticker MSRP.  At the same time, it also put their other, more affordable releases on radar of many audiophiles curious about what else Rao You Liang (Mr. Rao, a.k.a. the “old man” and the founder of Oriolus) is going to come up with.

Today, I’m going to look at one of their latest releases, Crassirostris, which similarly to other Oriolus IEMs was named after a bird.  Not going to deny it, its deep purple look caught my attention, and I was also curious to hear its hybrid (DD/3BA) tuning after spending some time with their other Isabellae single DD release.  Thanks to Andrew @Musicteck, I was able to borrow a pair.  With so much going on in my life now, I’m still trying to catch up with all the reviews, and doing shorter In-a-Snapshot write up allows me to publish more often, though I do have to warn you these are shorter reviews without too much focus on comparisons and pair ups.  Now, here is what I found after spending a week with another bird from Oriolus flock!

Unboxing experience of Crassi is very similar to Isa, a silver sleeve over a compact gift-box with all the goodies inside, secured in a cutout of a foam insert.  And yes, the packaging box itself is nicer than a plain cardboard Traillii box, but that is a totally different topic of discussion which has been beaten to death already.  I do like a nice touch of the front sleeve artwork with 2 birds chirping on a branch, a detailed spec on the back, and the reference to Raosound Studio below it.  As one can guess, Raosound refers to Mr. Rao studio where he creates his IEMs.  You can learn more about it in this video: https://youtu.be/gHwGRNs4Fwc 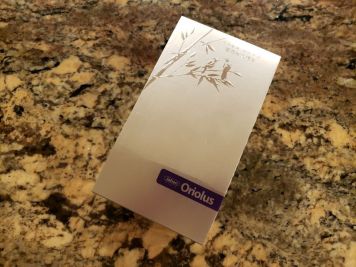 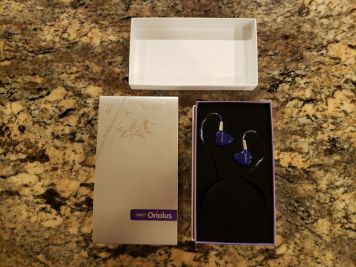 The included accessories are basic and quite minimalistic.  It features a selection of silicone (S/M/L single flange and a pair of double-flange) eartips and foam (M/L) eartips, a cleaning tool, and a shirt-clip.  The same accessories were included with Isa as well.

Due to removable nature of the cable, you can consider it as an accessory too.  The cable is copper-silver hybrid and uses 4 twisted conductors, a silver/purple pair on each side.  The cable is very supple and non-microphonic.  Crassi comes with 3.5mm plug in a nice stainless- steel housing with a good grip, matching finish slick y-split and chin-slider, clear flexible pre-shaped earhooks, and matching finish 2pin connector housing with red/blue marking ring to indicate right/left sides.

I was a bit surprised that Isa comes terminated with 4.4mm plug while Crassi is 3.5mm.  Perhaps, the assumption is that Isa can benefit from more power of balanced output while Crassi is easy to drive even from single ended port. 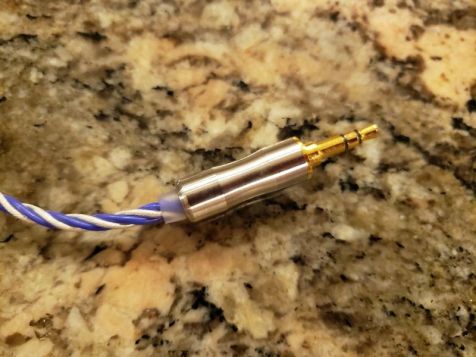 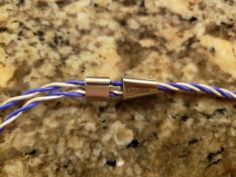 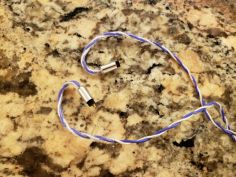 The Crassi has a hybrid design with a driver config of a single DD and 3xBA drivers.  The 3D-printed resin shells are clear and you can easily see through to observe the positioning and the grouping of drivers.  The 3-bore nozzle has 3 distinct tubes with one going to DD, another one going to 2 smaller BAs, and the last one going to a larger BA.  The all-purple faceplate with Oriolus name has a decent size vent for a dynamic driver.  No driver flex was detected, maybe just very slightest and only because I’m using the largest size eartips to make a tight seal.

The Crassi shells are very small and comfortable to wear, nearly identical in size to Traillii, down to the same diameter of the nozzle.  The purple faceplate is a great match for purple and silver stock cable.  Also, the shell has a 2pin recessed socket for extra security when mating with the cable. 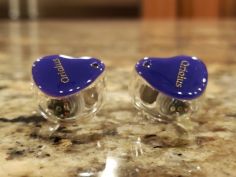 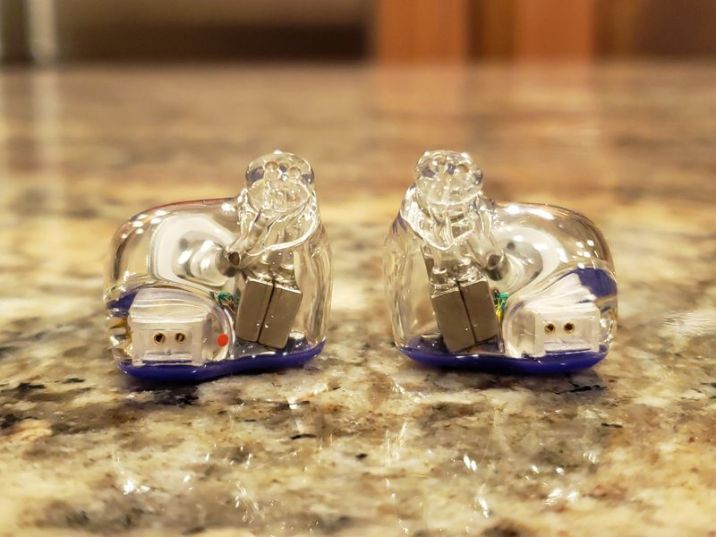 I hear Crassi as having a well-balanced signature with a fuller body natural tonality.  And I would go further by describing the signature as a wide W-shape, and the reason I’m calling it “wide” because the bass emphasis is more on sub-bass and the treble emphasis is more on mid/upper treble.

The bass has more emphasis on sub-bass, going down deep with a textured rumble; mid-bass has a more rounded punch with a shorter attack and longer decay, typical of DD driver performance.  Overall, bass is more relaxed with a tilt toward sub-bass lift and with a laidback mid-bass.  Lower mids have a fuller body, not overly-thick, but definitely above neutral, giving the mids/vocals a more natural musical thicker tonality.  Upper mids are clear, detailed, natural, smooth, and soulful, which applies to both male and female vocal performances.  Not exactly micro-detailed or revealing, but 2kHz and 4kHz peaks keep it in check with plenty of natural details.  Treble has more emphasis on mid treble, with a generous peak around 10kHz, giving the sound a good level of definition and clarity without any lower treble harshness and with a rather moderate (subdued) extension of upper treble.  The tuning of the treble is natural and non-fatigue.

The soundstage has more depth/height than width, though the width is still above average.  All the sounds are easy to distinguish, though imaging and placement of the sounds is closer to the center and slightly more out of your head.  Layering and separation is above average, typical of a smoother tuned sound without too much air between the layers.

Overall, this is more of an all-rounder type of tuning, though I think it will work better with natural non-synthesized instruments, and will also be great for classical music tracks, instrumental tracks, or the tracks where you want to tap into the emotions of the vocals.

Though I didn’t have the comparison in my original write up, I just posted this on Head-fi and thought it will be a good idea to update my review with Crassi vs Isa comparison since I received quite a few questions about these two little Oriolus birds.

The way I hear it, the nature of Isa mid-forward sound sig is due to its more neutral linear bass tuning, from sub-bass to mid-bass, brighter more forward upper mids peaking between 2k-3k with more crunch, and also peaking around 7k to give treble more clarity and definition without offensive sibilance.  And it goes further, with 10k and 12k peaks to extend the treble and to give it more air.  So, the emphasis on upper mids and treble gives it more mid-forward presentation.  As an opposite, Crassi elevates sub-bass region to give it more rumble and more weight, plenty of clarity in mids (distinct 2k and 4k peaks), and extra clarity and definition (around 9k-10k) in mid-treble; then, a rather modest airiness, not as much upper treble extension.  So, lift in sub-bass and less air gives Crassi a more soulful natural tonality, not veiled, still plenty of clarity and details, but with a smoother and more organic touch.

Regarding the fit, Crassi shells and nozzle are nearly identical to Traillii, while Isa shells are as comfortable, but nozzle is thicker, something that will require going one size smaller when choosing eartips.  Keep that in mind if you already using small eartips to get a good seal, Isa might not be suited for your ears. 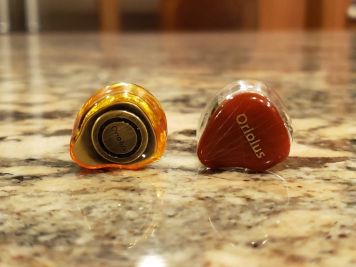 In a summary, Oriolus Crassi has a bold “purple” look, comfortable fit, matching color cable, and a tastefully tuned balanced W-shaped signature with more emphasis on sub-bass, smooth natural detailed mids, and natural airy treble.  It is great for vocal, classical, and instrumental tracks due to its laidback natural tonality.  And as I already mentioned, Oriolus recently released another little gem, single DD Isabellae which has a more neutral bass, and brighter and more revealing upper mids and treble, while in comparison, Crassi sounds smoother, more natural, and more soulful.  Both Crassi and Isa complement each other nicely in looks and sound tuning, and each one is a lot more affordable relative to Traillii.