As I mentioned in one of my previous reviews, the demand for thumb-size usb DAC/amp dongles went through a roller-coaster ride.  Popular at first, back in the days when sound quality of smartphones and laptops was sub-par, then not so much when sound quality improved, and back up again when some smartphones lost 3.5mm jack, followed by a decline due to popularity of TWS earphones and wireless DAC/amp dongles.  Plus, market got saturated with too many of these releases, some offering minimal sound improvement.

And while today the demand for these devices is not as high, it still exists because some people don’t want to carry a smartphone and a separate DAP, especially since DAP by itself can’t offer streaming without wifi access.  Plus, even the best usb DAC/amp dongles have limitations because they need to draw current from a smartphone, draining the battery, raising noise floor with sensitive IEMs, and sometimes causing incompatibility with iPhones due to its 100mA current supply limitation with externally connected devices.

I have to admit that I received Hidizs DH80s a while ago, gave it a quick listen, and set it aside to revisit later, but never got to it.  Not until recently when I was analyzing a problem with one particular usb DAC/amp dongle which has issues at high volume with iPhone, I remembered HD80s and its advantage of built-in battery.  So, I revisited it and found quite a few surprises.  Let me discuss it further in my review of this portable DAC/amp. 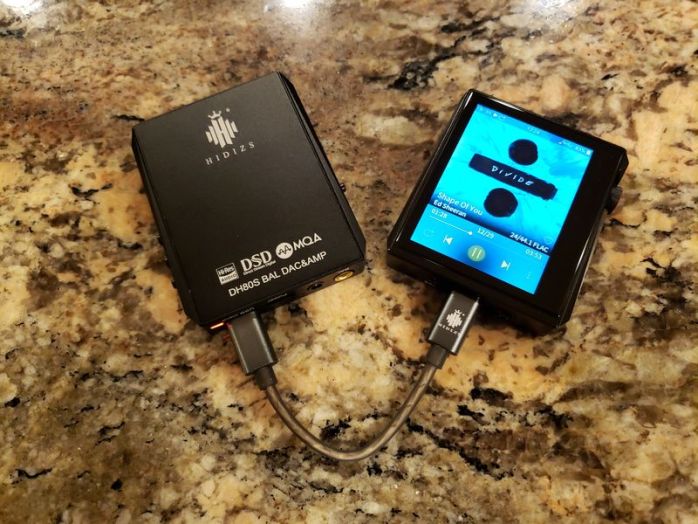 DH80s arrived in a nice compact box with a glossy 3D picture of the device on the cover and the highlight of DSD and MQA support in gold print underneath.  The back of the box has a detailed spec in silver letters, though it was too small to read.  With the top cover off, the DAC/amp was sitting securely inside the foam cutout of the top tray.  And with that tray out, you can find all the accessories at the bottom of the box. 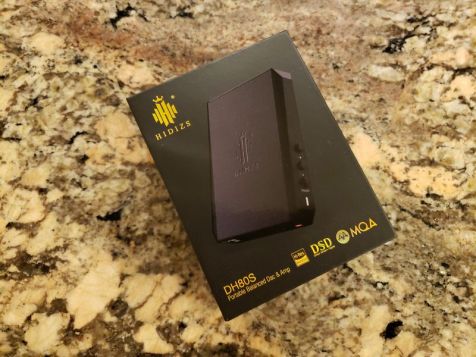 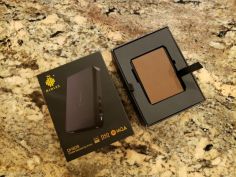 Included were the essentials, such as the decent quality USB Type-C to USB-A cable used for charging and USB DAC connection to your laptop, Type-C to Type-C USB OTG short cable for connection to your smartphone or DAP (unidirectional, with a Hidizs labeled connector always going to the source), Type-C to USB-A converter for OTG cable, warranty and user manual (wasn’t included with my review device, but should be in production units), and a stick-on small metal disk.

At first, I dismissed that metal disk, about an inch in diameter, until I noticed later it had a sticky side.  This DAC/amp has a clever mounting mechanism using a magnetic back panel (on DH80s) that will attach to any source you can stick this metal disk to, either your smartphone or another DAP as an example.

Design and under the hood.

DH80 model comes in 2 versions.  DH80 has a docking station with USB-C connector at the base, making it very convenient to “dock” AP80 DAPs, expanding its functionality with DH80 balanced output.  The other model, which I received for review, was DH80s with “s” suffix, a universal standalone version of DH80 designed to connect to any source. 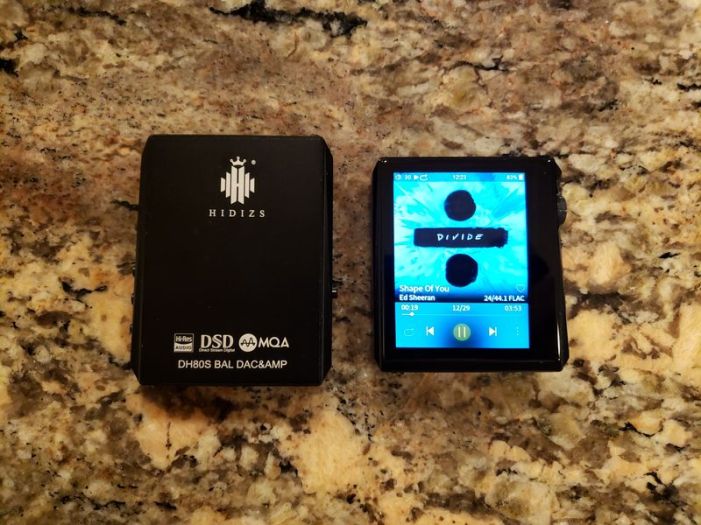 This device is not your typical slim dongle, and with one piece aluminum alloy CNC chassis body and dimensions of 70x50x12mm with a weight of 76g (DH80s) or 82.3g (DH80), it is a little bigger than AP80 mini-DAPs.  But it’s still relatively lightweight and definitely slim to carry alongside your smartphone, especially when you attach it magnetically to the back.  Referred to as “magnetic absorption design”, the back of the DH80s has a strong magnet covered by a brown piece of leather to make sure you don’t scratch the surface of whatever device you attaching it to.

The front of the device is just all metal chassis with a logo and DSD/MQA printed on top.  On the right side you will find a toggle switch with 3 gain settings (L/M/H).  Left side has Volume +/- buttons for independent volume control (in 30-step adjustment), and a power switch with a charging indicator led next to it.  That switch is a little confusing since there is no clear indication of which way is on or off, and the multi-function led at the bottom of the device doesn’t have a constant light when power is on.  But I was told that Hidizs is working on a new fw update where the power-on led will stay up to indicate that device is turned on. 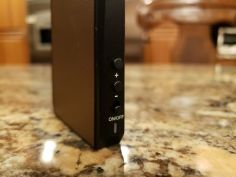 The bottom of the device has 4.4mm BAL (210mW @32ohm) and 3.5mm SE (125mW @32ohm) headphone outputs, pretty powerful for a portable use with IEMs and some easy to drive headphone.  Next to it you have an independent USB-C power charging port for DH80s internal 1300mAh 3.7V LiPo battery that takes about 2.5hrs to fully charge and last you about 8hrs (SE) mode and 6hrs (BAL).  USB-C data input is right next to it.  And there is another multi-function led which lit up briefly when power turned on, and during playback also indicates a sampling rate per red (44.1k-48k), blue (88.2k-384k), and pink (MQA). 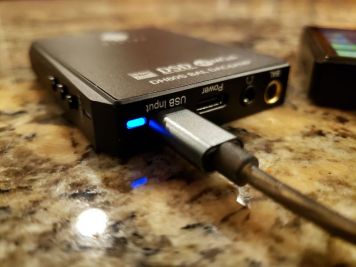 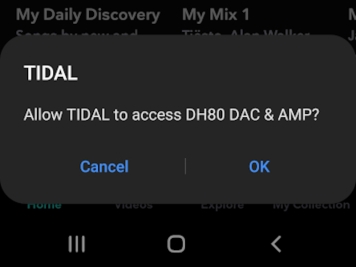 I had no issues using it connected to my smartphone, recognized right away without a problem and with every application I tried (Tidal, Qobuz, Amazon HD, YT, HibyMusic, Neutron, etc).  The included USB-C OTG cable provided a sturdy and reliable connection.  And also, there was no issues using it with my Win10 laptop, recognized and setup right away without a need to install any additional drivers.