Back in the early 2018 (at CanJam NYC) when the original Legend X (LX) was introduced, I don’t think anybody could have predicted the popularity of that release.  3+ years later, I’m still being asked about LX pair up with new cables and DAPs I’m reviewing or comparison to other bass-emphasized IEMs.  There was also SE version of LX, though I’m not familiar with it.  But throughout all this time, Empire Ears wasn’t resting on their “basshead” laurels, and apparently, they were already working on the new design of the next gen Legend.  The rumors about EVO have been circulating for a while.  But due to lack of CanJams, the place where Jack and Dean like to tease prototypes of upcoming releases and to collect crowd-tuning feedback, nobody knew if or when these rumors will become the reality.

My first encounter with EVO was back in April when I had a chance to hear and to provide the feedback on one of the semifinal prototypes.  It already had a mature tuning and sounded like the EVOlution of the original Legend X.  But those who know Dean are well aware that he is perfectionist when it comes to tuning and will continue tweaking until the last second.  As a matter of fact, when EVO made its official introduction at HKAV show early in August, it still didn’t have the final tuning, and EE team was eager to hear the feedback from audiophiles who attended the show, the first live opportunity in a long time.  Finally, the tuning is finalized, and EVO is ready to rattle your ears, if you are into that type of audiophile fetish!  So, let’s find out more about Legend EVO and its evolution from LX.

This section going to be brief because the final production packaging of EVO wasn’t ready at the time when it was sent out to me for review.  The launch edition of the Legend EVO will include a custom handcrafted Vishnu leather case and will be limited to the first 400 units.  This hand dyed leather case wasn’t ready yet, thus I received EVO in a regular standard EE metal round case which is going to be part of the stock accessories after launch edition units sold out.

While I don’t have the final packaging, I already saw early unboxing pictures to confirm the packaging box itself will be updated, and you can still expect a set of Final Type E eartips.  Also, my review sample arrived with a double-pocket mesh sleeve, branded with EE logo tag, and I got the confirmation that sleeve will be included as well.  You might recognize it being similar to the ones from Campfire releases.  These sleeves come in handy to keep shells separated and protected from scratches or minor drops, though the pockets itself felt a bit tight but still OK. 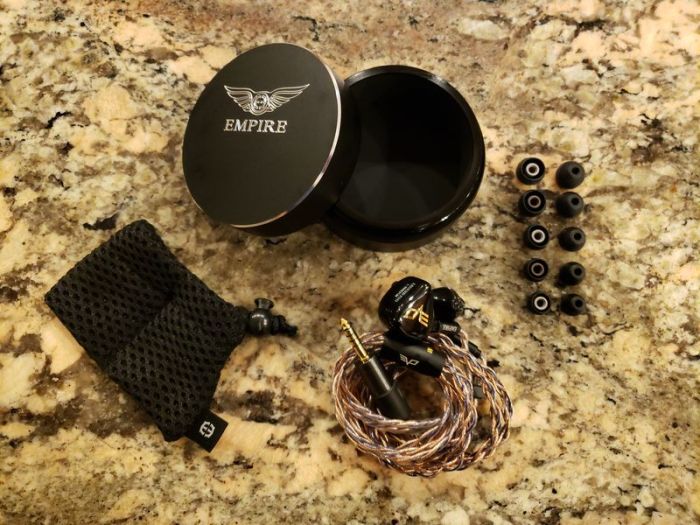 Another “accessory” which deserves its own spotlight here is the new stock cable, designed in collaboration with Peter Wong Audio, Empire x PWA Genesis copper cable.  If you remember, the original LX came with EA Ares II cable that used 26AWG copper conductors.  Genesis also features Ultra-Pure OCC Copper wires, but with a thicker 24AWG gauge.  It is still a 4-conductor design with wires loosely braided between the plug and y-split, and then twisted in pairs going up to connectors.  Each wire features insulated UV-resistant polyvinyl chloride sheath, and you can see through to spot a distinct blue string of polypropylene reinforced core.

The cable plug is a genuine Pentaconn 4.4mm balanced connector, and if I’m not mistaken, this is the only option available with Genesis cable.  The all-black metal y-split and matching chin slider feature a unique shape which is part of the new PWA design hardware.  The y-split has EVO symbol on one side and “Legend” label on the other side.  The IEM connectors are standard 0.78mm 2pin with a matching stealth black housing and “Empire” label facing outside, and next to it you will find a pre-shaped transparent heatshrink earhook.

Genesis looks and feels very durable, and blue core string twisted around copper wires adds to a more unique look of the cable.  Unlike other traditional PWA cable designs, you are not dealing with a braided clothe sheath, thus no worries about microphonics, but I did notice that cable felt a bit stiff.  There is no memory effect as you unwind it, but it felt a little stiff when you wrap it around for storage.

Similar to LX hybrid design, EVO utilizes dual DD and 5 precision BA drivers, though dynamic drivers have been updated to their new Dual W9+ (Weapon IX+) subwoofers, and I assume BA drivers were updated as well.  And as part of the new Dual Conduction Architecture design, in addition to these 7 drivers, you will also find an all-new Bone Conduction driver W10 (Weapon X), turning EVO design into 8 driver tribrid system.  This Dual Conduction architecture refers to dual W9+/5BA drivers as part of “air conduction” and W10 BC driver as part of “bone conduction”.

The bass of EVO is covered by dual 9mm Dynamic Drivers (W9+), updated and noted by “+” suffix.  These are the same dual driver wooders introduced in Odin.  Relative to original W9, this enclosed woofer in a tuned bass-reflex system boasts a larger internal coil diameter to improve its sound performance.  The 5BA drivers are proprietary and tuned to cover mids and highs.  But on top of that you also have Weapon X Bone Conduction driver covering a wide dynamic range of 5Hz-35kHz.  This driver is enclosed in a nickel-plated stainless-steel chassis with a powerful high grade N52 neodymium magnet and Japanese made pure copper voice coil that are driving the vibration membrane of this BC driver.

I also noticed in the spec a reference to a new 9-way synX Crossover Network, most likely customized to handle the tribrid combination of drivers in EVO design.  The main function of synX is to control and to balance the frequency response of all the drivers in the system.  Plus, you will also find A.R.C. resonance control tech which is utilized in all EE iems.  It stands for Anti-Resonance Compound which is a proprietary coating that eliminates unwanted vibrations and resonance within IEM.  Basically, this compound serves as a dampener to absorb the unwanted resonance.

The shell size of EVO is a little bigger than LX and Odin, but overall shape is closer to Odin, especially the contour and insertion depth of the nozzle.  The shell is not exactly solid black, it has a little bit of transparency, especially when you look at the top side of the shell where you can see the Weapon X inside.  According to EE, W10 was strategically “ceiling mounted” in a specifically design cavity at the top of the shell, to keep all sonic vibrations internal and to maximize bone conductivity effect.  When I had a chance to check out their early prototype, it arrived with a temporary clear faceplate, and I was able to see up close under the hood.

I also noticed that in addition to their traditional tri-port vent located closer to 2pin flush mounted socket, there is an additional second tri-port vent at the other top corner of the shell.  Vent design is important for proper tuning of Dynamic Drivers, which means that dual tri-port vents are not just for the looks.  But despite more vents, still expect to hear a “signature” driver flex click, unless you pick smaller size eartips to relax the seal.  The tip of the nozzle features 4-bore opening, perhaps aligned with a partitioning of the drivers, and the inner side of the shell was sculptured for a universal-custom fit to sit more comfortably inside the concha cavum area of the ear.  Due to the size of the shell and my ear anatomy, EVO was sticking out a bit, but still felt comfortably and secure in my ears.

The final design touch is the new custom EVO logo featured only on the faceplate of the left shell, while the right shell faceplate has traditional golden Empire Ears “Bentley” wings.  The new logo design is very clever with V in the middle and its sides expanding into reverse E (on the left) and enclosed O (on the right). 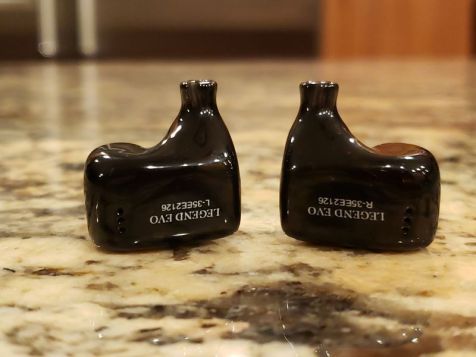