Just when you thought JOMO was a history, Joseph Mou decided to comeback with a lineup of new models. Side-by-side with Eric’s Eletech table, MMR/JOMO and Eletech had one of the most eye-catching colorful displays at CanJam NYC. But before switching gears to JOMO, he decided to have the last word with MMR Thummim SE model, introducing a Special limited Edition of this previously discontinued tri-brid flagship. The original model featured 9 drivers, including DD (9.7mm) bass, 2BA mids, 2BA highs, and 4EST highs, while SE model added 2 more BAs in mids for a total of 11 drivers, and complimented it with Eletech silver cable.

I knew about 2 additional BA drivers, but wasn’t aware those were mids. While testing Thummim SE, I noticed a big open soundstage, bass still being tight and very articulate, and treble being crisp and hi-res. But instead of thicker fuller body mids, the sound of lower mids was more neutral and upper mids were more revealing, thus I came to the conclusion of additional BAs contributing to mids which Joseph confirmed. Btw, this limited edition $4.5k release only had 23 units in total, and literally within a week of its announcement, all 23 have been either sold or already spoken for.

Moving on to new JOMO releases, there were 3 new models, automotive themed by name and with a special lacquer-based paint: 304 Boxster (BA low, 2BA mids, BA high), 306 Supra (2BA lows, 2BA mids, 2BA highs), and flagship 308 Spyder (2BA lows, 2BA mids, 4BA highs). Unfortunately, I didn’t get a chance to hear these. Instead, another new JOMO Concept S100 model caught my attention. It was a single DD IEM with a very balanced signature and a natural laidback tonality with a rather good retrieval of details. I actually enjoyed the tuning of S100 very much.

As already mentioned, Eric’s Eletech table is usually next to MMR/JOMO at every show, and its display presentation always draws the attention of almost anybody walking by, regardless if they are cable believers or not. I’m well familiar with Eletech cables, covered Iliad in many IEM reviews as part of pair up synergy, had a separate review of Aeneid (reviewed) which apparently going to be discontinued soon, and covered Socrates (reviewed). At the table, they also had one of their latest non-cable releases, a leather storage case – Luxe CC. Eletech decided to expand their product line with some high-quality leather goods for audiophiles. Unfortunately, this limited-edition Luxe CC was sold out within hours of availability. This multi-compartment storage/carry case wasn’t just practical, but also features a truly luxurious leather material and premium build quality.

But what caught my attention was a thicker braided headphones cable on a display under “Prototype I” name, referring to upcoming Inferno model from their new Dante series which is designed for full sized HP cables. Eletech is known for IEM cables, while this one was intended for less mobile application with plugs for full size headphones. Also referred to as cable of Duality, it features a dual 21awg design, using dual isolated strand sizes within the core and a dual shielding with core interior using Fiber ceramic insulation and most of the outer layer using OFC shielding net. The material itself is a dual copper blend, like in alloys, but instead of blending 2 different metals, Eletech blended 2 different copper materials.

For a demo purpose, Eric had Audeze LCD-5 with this new cable, a perfect opportunity for audition. Of course, without trying and comparing this cable to other ones or being more familiar with a tuning of LCD-5, it is hard to judge the contributing factor of Inferno over other cables. But, the sound of LCD-5 with Inferno was very balanced, smooth, natural, and, at the same time, quite detailed. With so many latest reference-tuned more revealing full size headphone releases, I did enjoy the natural tonality of LCD-5 paired up with this new Eletech copper cable, though obviously I haven’t compared it to its stock or other cables. 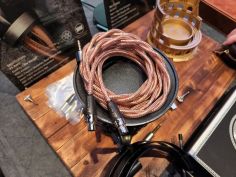 Making their debut at CanJam NYC show was Bloom Audio with a sampler of products sold in their on-line store. It was great to see Bloom bringing to the show some of the products from manufacturers who were not able to attend this CanJam, like iBasso, A&K, and Questyle. But even showcasing products from those manufacturers who were at the show, like Meze Audio with Elite and Liric or iFi with their popular xDSD Gryphon, was welcomed at their own table to give visitors another opportunity to hear it.

Also, Bloom had at their table an almighty $15k HiFiMan EF1000 hybrid design amplifier that uses six 6922 vacuum tubes and has headphone output pushing 20W of pure Class A power (rated under 35ohm load), and a power amplifier for 8ohm load with 50W pure Class A and 110W Class A/B. This particular amplifier is sold by itself or in a bundle with Susvara. I’m not 100% sure if HiFiMan had EF1000 at their table, but even if they did, it was another opportunity for CanJam visitors to test this powerhouse.

As already mentioned, other products featured at the Bloom table were from companies who were not able to attend the show. Like iBasso latest DX240 DAP (reviewed) or A&K latest SP2000T DAP (reviewed) as well as their new A&K Acro CA1000 transportable desktop amp/player which has DAP integrated into this desktop amp while featuring quad ESS SE9068AS DACs. I also spotted Questyle CMA Fifteen, the 15th anniversary edition $2.5k DAC/headphone amp based on ES9038Pro DACs, which is also MQA certified and features Wireless Bluetooth with LDAC support.

It became almost traditional for me to mention a lunch break during CanJam NYC show. While downtown Manhattan offers many fantastic food choices, during my first CanJam back in 2017 I discovered a buffet on the 8th floor of Marriott Marquis Hotel. It was convenient and time saving, and I didn’t have to go outside into the freezing cold. Plus, the food selection was really good. Unfortunately, this year Marriott dining service decided to have buffet only for breakfast, not lunch. I still enjoyed my half an hour break, and the food on the menu wasn’t too bad and reasonably priced, but I hope that buffet lunch returns back next year!