CustomArt’s FIBAE flat impedance technology is highly welcome breakthrough tech that is extremely useful without you even knowing that you need it. Since low impedance IEMs can act quirky and sound absolutely wrong when plugged into sources with high output impedance (hint – Andromeda), it is not only great for audiophiles who like using a multitude of sources to listen to music but even more useful for musicians who have to plug their IEMs into an even more variety of unpredictable gear depending on availability and situation, especially when you need to plug IEMs into extremely unpredictable vintage gear with ‘who knows what’ output impedance. FIBAE tech makes sure that the source’s output impedance won’t affect the sound signature of the IEM, whatever source/device you plug it into.

Drivability – F7U has a very low 12Ω impedance and very high sensitivity of 122dB. It can be driven via any device, no problem!

The first part of sound analysis is with the Universal version, with the comparison between UIEM vs CIEM after.

Graphs are measured using an IEC60318-4 (IEC711) setup. You can compare all the graphs on my IEM Graph Database here – Animagus Squiglink.

F7U is a significant step away from the original F7’s sound signature. Where the original F7 was a bass boosted Diffuse Field target inspired IEM with warmer lower-treble and slightly airy upper-treble, the F7U instead is a fuller and airier take on the Harman Target. F7U has around 7dB of a bass shelf, fuller lower-midrange presentation than neutral, around 9dB of pinna gain that results in a very nice and forward upper-midrange presentation and a coloured treble character that adds nice sparkle and air up top – all making F7U a W-shaped, fun, bass boosted, lush and airy signature. 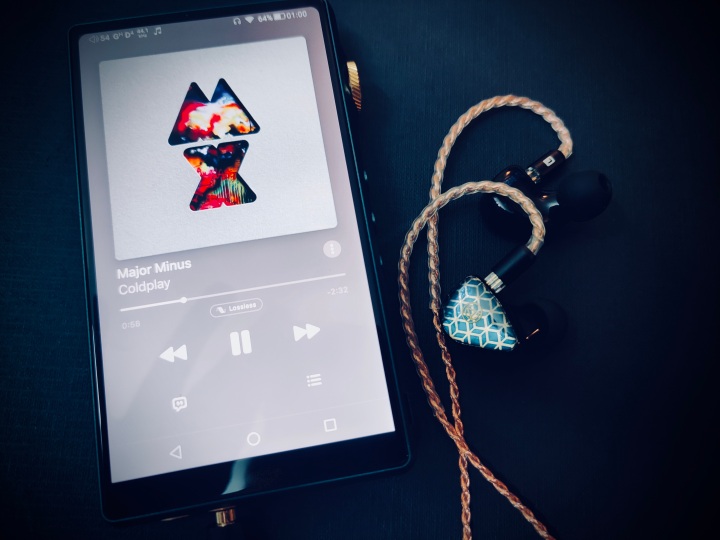 Bass – F7U has 7dB of bass shelf below 250Hz which boosts both the sub-bass and mid-bass. F7U’s bass shelf is different from most Harman target IEMs because it also boosts the mid-bass by around 3dB above neutral. As a result, bass in F7U has rumble, slam and authoritative punch. This is not a typical BA bass presentation. It sounds more like a cross between a DD and BA. Bass is more upfront compared to reference IEMs like the Softears RS10 and the Empire Ears Odin but very well separated with a strong centre image. It has the attack, speed and decay of a BA but the warmth and punch which is quite DD like. It enables a more coloured presentation than reference and definitely sprinkles some excitement into what would’ve otherwise been a reference signature.

Mids – F7U has a coloured, fuller lower-midrange than neutral – which can be a good or a bad thing depending on the type of presentation one prefers. If you like an absolute reference presentation, you’ll feel that instruments in F7U have warmer, fuller and thicker body than neutral as well as hear kicks and snares sounding fatter than they actually are. On the other hand, people who felt IEMs like the original F7, Empire Ears Odin, Softears RS10 or the Moondrop S8 were leaner than they prefer, will in fact prefer the F7U more. F7U goes for a nice forward, reference-y approach in the upper-midrange with around 9dB of pinna gain. This results in instruments having good amount of crunch, bite and presence. This combo of lower-midrange and upper-midrange tuning results in vocals and instruments sounding fairly accurate and natural but with some added lower-end body and weight than neutral. It does colour the overall tonality and timbre with warmth but in a very nice way which is fairly natural.

Treble – F7U’s treble character changes slightly with different tips. With stock tips, treble presentation isn’t the most linear but is sparklier and sizzlier than neutral in a fun way which adds the much needed sparkle and air to an otherwise warmer and fuller lower half signature. It has 3 prominent treble peaks – around 5kHz, 8kHz and 17kHz. The 5kHz peak makes sure drums have good stick attack, 8kHz adds the sparkle and the 17kHz the air and sizzle. When I first gave the F7U a listen, the 17kHz peak stood out prominently (it will especially if your upper end hearing is still intact) but my ears adapted quickly, just like in the case of 64 Audio Tia driver IEMs. This presentation takes the F7U away from a neutral/natural presentation and slightly into the W-shaped fun and energetic territory. The added sparkle and sizzle add extra excitement to vocals, acoustic guitars and cymbals, making them come alive, enabling a holographic soundstage experience where you get lost in the performance than hyper analyse every bit. It definitely enhances the musicality and engagement factor for me. With Final Type-E tips, treble is a bit more linear but the airy upper-treble character as well as the upper-midrange forwardness is reduced. I’ll recommend tip rolling to see the balance you like most.

Technical Performance – The F7U (be it the UIEM or CIEM) has impressive technical performance for its asking price and can even play along with some of the $2k segment leading IEMs fairly comfortably, some of which I’ve covered below. It’s dipped and boosted treble tuning is not the most neutral but makes for very good clarity, detail retrieval and an expansive holographic soundstage with really good imaging. What I dig even more is its excellent left to right separation with lots of space between instruments and a strong well separated centre image that defines centre panned instruments like vocals and bass really well. It also has good depth with a nice black background and along with good resolution, disappearing reverb trails are easy to notice and very clearly heard.

FIBAE 7U Universal vs CIEM.

Heads up – All CIEMs will not measure the same. This is primarily the difference between the standard UIEM and my CIEM.

The F7U CIEM differs primarily in two regions, which actually changes the character of the CIEM significantly compared to its UIEM counterpart. The CIEM fits much more snugly, so it’s no surprise than it has a bit more bass with deeper sense of rumble as well as harder punch and slam. Difference of treble peaks and dips between the two are where the main differences in tonal character come from. As you can see in the graph, the CIEM has more energy in the 4k-7kHz region with a mid-treble dip in the 7k-15kHz region. This results in the CIEM sounding warmer than the UIEM. Even though the UIEM too has a dippy and boosty treble, its treble presentation comes across better balanced. The UIEM not just sounds sparklier because of the 9kHz peak where the CIEM has a dip, but also airier even though the UIEM’s 17kHz peak has slightly lesser gain than my CIEM’s 15kHz. This is mainly because it has more presence in the 17k-20kHz and sounds airier as a result, with better top end extension. Soundstage boundaries are similar but the UIEM has a cleaner and more open soundstage, mostly owing to better treble balance. The UIEM also has slightly better clarity and micro-detail retrieval – again because of better 8k-20kHz treble tuning in comparison.

A professional musician, songwriter, record producer and audio engineer who likes to indulge in everything music - be it guitars, amps, studio or audiophile gear. Being an audio engineer and fascinated by audio technology, he is on an adventure of finding the most interesting products with the best sound, tech and value for money. View all posts by Animagus