I would like to thank FiiO for providing me with the M11 in exchange for my honest opinion. No incentive was given for a favorable review.

M11 Specifications at a glance:

Available for Sale on Amazon and other retailers.

As I mentioned in my review of the FH7 and LC-2.5D, FiiO announced 7 new products on one day back in March during its 2019 Spring Launch Event held in Guangzhou, China. One of those new products was the M11, FiiO’s first Android-based “smart DAP”, and before moving on to the M11 proper it might be useful to consider what FiiO has been doing in terms of the nomenclature that they have been using. I think that, like me, a lot of people have grown used to FiiO’s players having the ‘X’-name like the very popular X3 and X5 models that came in different iterations over the years. Recently FiiO switched to giving their players a name starting with ‘M’, such as the M6 and M9. I naturally assumed that because 9 was higher than 7, the M9 was the replacement for the X7-II, but that did not make sense based on the price and the specs. So I looked around and found that FiiO had deliberately switched from X to M because the newer models were not directly comparable to the previous lines. So we say goodbye to the venerable X1, X3, X5 and X7, and welcome the new M-line where the models up to the M9 can be seen as hors d’oeuvres to the launch of the M11 and later this year two or three more high-end models.

The M11 really does show that FiiO is looking in a new direction, as it runs a custom Android 7.0 OS that provides a very different experience from the straightforward Digital Audio Players (DAPs) of the past. That was also the main reason I was really looking forward to reviewing the M11 because I have absolutely no affinity with Android and wanted to see if it could open up new ways for me to enjoy my music and how I use my DAP in general. Sure I have an Android phone, but people who know me also know that my number is confidential information and I try actively to avoid using it whenever I can. My most used apps are Solitaire and the local council’s garbage collection app. So my challenge to FiiO was simple… See if the M11 could drag my analogue backside into the digital age.

The unboxing experience is a fairly standard affair that still works very well. You remove the sleeve from the classy black box and as you open it up your new prize possession is revealed: There, seated snugly in black foam, sits the M11. (I removed the plastic and protective foil for the pictures. Nobody likes to see plastic in pictures.) Underneath the M11 was another layer with a box containing the SD card slot poky-thingamajig and a couple of booklets, and another small box with the USB charger cable and a coaxial adapter cable. That was pretty much it. A very simple selection of accessories and I am not sure what else I would expect here.

The M11 does come with a clear TPU protective case and (already pre-installed) a 7H tempered glass screen protector. The case I removed immediately because I did not like it one bit and the M11 is just too pretty to cover with something like that. Still, I imagine that there are plenty of people who will appreciate the added protection to keep their M11 in pristine condition. The screen protector is great and you don’t really notice that it is there.

As I indicated above, I think the M11 looks really pretty. It is a sleek yet angular design that looks nice and clean, and feels great when holding it. The M11 is still a substantial DAP and I think that is a very good choice considering that it is meant to function as an Android-based smart DAP. The 5.15″ screen is nice and big, making it easy to use for everything that the M11’s custom Android OS can deliver (more on that later). Along the outside, starting on the top, there is a single on/off button with a blue LED ring around it. The button can be pushed a single time for the screen to come on or switch off and if held it will switch the device on or off. On the left side there is a play/pause button, a volume wheel and a back/forward rocker button. The volume wheel feels great and is positioned in such a way that it can’t be turned by accident and yet is still easy to use. 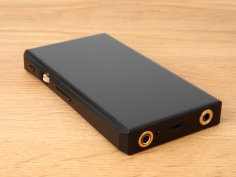 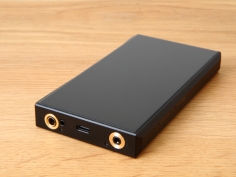 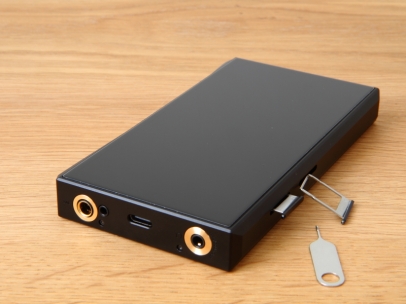 On the right side there are two micro SD card slots neatly hidden away. FiiO have included a tool that you can use to pop out the cardholders and theoretically you could add two 2TB cards here to expand the memory by 4TB in total. However, FiiO have acknowledged that there are some issues with high speed, high capacity cards. In particular the Lexar 512GB micro SD card has proven problematic and as a solution FiiO have slowed down the speed of slot 1 (the top one) and recommended for single card users to use slot 2 (the bottom one) as their primary. From what I understand FiiO are considering removing one slot from future batches of the M11.

Finally, on the bottom we find something that is quite notable. Alongside the central USB port there are not two, but three headphone outs. One 3.5mm Single Ended on the right side and on the left can be found the lovely chunky 4.4mm balanced out with a tiny 2.5mm balanced out alongside. My first reaction was to consider it overkill, but it is pretty handy nonetheless considering there is still no industry standard and it does not look like it will happen anytime soon either. Now I was able to use the Dita Fealty with the 4.4mm plug attached and that did feel like a much more solid connector. So credit where it is due, good job FiiO!

A feature that FiiO has been keen to point out is that the M11 has been built around the Samsung Exynos 7872 CPU. This is a six-core processor that has a separate core for audio and so… I am not even going to pretend I know what it all means, as I am not a phone geek and enjoy this hobby for the music rather than the technical aspects. One thing is for sure, performance-wise this CPU works very well and it gives the M11 a really smooth and fast interface that feels no different from my Sony XA2 phone. Start-up times are quick (a few seconds) and everything runs without any noticeable delays. The scanning of music is a little on the slow side when using the FiiO Music app, but that is due to the app itself, as the Hiby Music app is much faster.

For the DAC FiiO went with dual AK4493EQ DACs, such as also used by Shanling in their M5s and so there is nothing too special there, however, looking at the power output of the M11 is a different story. The specs as FiiO gives them on their website are very decent for the 3.5mm SE out: 255mW, at 16Ω, 195mW at 32Ω and 22mW at 300Ω. But for balanced it is really impressively powerful with 480mW at 16Ω, 550mW at 32Ω (not sure if those numbers might have to be the other way around, but that is how FiiO has it on their website) and 88.5mW at 300Ω. That is a lot of power and FiiO do indeed include 300Ω headphones in their recommended range for the balanced out (max 150Ω for the SE out). I don’t have 300Ω full sized headphones, but when I asked around some people responded that they were quite happy to drive their HD800 from the M11 and felt the result was acceptable. That adds a lot of versatility, as it means the M11 should be more than adequate for a wide range of headphones.

When in use, the M11 can get a little warm, especially on high gain and when ‘All to DSD’ is enabled, but it is nothing to worry about. FiiO have explained this is normal and within acceptable limits for the player. I also never found the player to get hot. (I mention this because I saw some comments where people were a little worried about it. No need. It is all good.)