I hear Andro’20 to have a balanced signature with a natural revealing tonality, and overall a more fun balanced tuning due to an evenly balanced emphasis on lows, mids, and highs (w-shaped).  It still sounds coherent with all drivers working in perfect unison.  The soundstage is very wide and deep, approaching holographic level.  With that, you should expect a great imaging and accurate positioning of every sound and vocals.  Also, I hear a great layering and separation of the sound with plenty of air between the layers.

Starting with lows, bass has a good low end extension with more noticeable sub-bass rumble, not too elevated but noticeable, and a faster mid-bass punch with more impact as well.  Overall, bass is articulate and well controlled.  Mids sound more natural and still with plenty of revealing details.  Lower mids are slightly above neutral level, giving the sound more body, while upper mids have a natural retrieval of details without being too bright or too smooth, striking a good balance between the clarity and naturalness of tonality.  Treble is well controlled, with a good extension and moderate airiness, tuned with just enough control to give the sound plenty of clarify and definition without harshness of lower treble peaks. Even with Type-E eartips which to my ears can put more accentuation on “s”, Andro ’20 treble sounds well controlled and natural.

The tuning is nicely balanced and has enough emphasis and control to work with any genre of music.

I hear a very noticeable change between Andro OG (v2, the same tuning as v1) and 2020 version in upper mids. While the bass and treble sound close enough, upper mids are lifted, around 2k and 4k region, to give the vocals more focus, more clarity, more balance, and improved definition.  To my ears, Andro OG always had a fun tuning with more emphasis on low end and treble, while mids were pulled slightly back.  2020 version gives vocals more focus and improved definition, changing the signature to more balanced.

When comparing Andro’20 to another IEM, like 64 Audio U12t, I hear a number of similarities with a very similar bass quantity, quality, and extension, though Andro bass is just a little bit tighter.  I also hear a similar quality and extension of the treble.  Mids/vocals is where I hear the biggest difference, most in presentation where U12t vocals are more out of your head and more distant, while Andro’20 vocals positioned closer and have a little more transparency.  Also, Andro soundstage is a little bit wider.

I added the comparison with DUNU Luna after the review was published because I received a handful of questions about it.  Though both have a similar soundstage width, Andro’20 soundstage projects a little further out of your head, while Luna soundstage depth is not that far out, giving the sound a little more intimacy.  With bass, Luna is probably in between of Andro’20 and Solaris’20, having a deeper sub-bass rumble and a little more mid-bass punch when compared to Andro’20, but not quite reaching the level of Solaris low end extension and impact.  Both have natural detailed mids/vocals which I’m hearing closer in tonality, but I do find Luna to be more transparent while Andro has some coloring.  With treble, Luna sounds more natural while Andro treble is brighter and with a little harsher sparkle.  The biggest difference here comes from a technical performance aspect where Luna sounds faster and tighter. 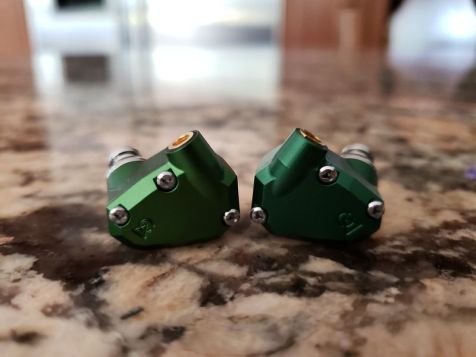 Since I received all three new Campfire Audio IEMs at once, during my long listening sessions I went back and forth with comparison, constantly stacking them up against each other.  And while these are certainly 3 different IEMs, the gap between 2020 versions of Solaris and Andro wasn’t as wide as between the corresponding OG versions.  Even ARA, in some way, felt like a variation of a new Solaris minus the bass.

In overall comparison between these three new 2020 CFA models, I find Solaris and ARA to have similar mids, but Solaris has bigger and bolder bass impact with a deeper sub-bass rumble, while ARA has crisper and more energetic lower treble.  When it comes to Solaris and Andro, I hear a similar bass impact, except Solaris has a deeper sub-bass rumble with more analog texture.  The mids of Solaris and Andro have a natural detailed tonality, but Andro has more body and sounds more organic while Solaris is more transparent and airier.

And in the final Tl;dr comparison summary:

Soundstage WIDTH: Andro and Solaris are similar and wider than ARA.

BASS: Andro and Solaris have similar impact, though Solaris goes deeper and has more texture, while ARA is more neutral and flatter (which gives its mids more focus).

MIDS: Andro has a fuller body smoother tonality, while Solaris and ARA are more transparent and layered.

TREBLE: Andro and Solaris have a similar sparkly well-defined treble, but smoother fuller body tonality of Andro mids make its treble to have perception of more controlled peaks.  In comparison, ARA treble is crisper, brighter, and airier.

Each IEM has a solid build and eye-candy design, comes with an upgraded quality cable and premium accessories.  Each one offers a refined sound tuning, which for some could be more like a fine-tuning when going from one model to the other.  And in today’s world of multi-kilobuck IEM flagships, Campfire Audio still offers a great value with its price/performance ratio.  At the end of the day, I hope my review will help you decide which one will suite your sound preference better!