The elevated impact of the bass, especially deep sub-bass rumble, and the forward presentation of upper mids with a proper pinna gain boost, gives GAEA a U-shaped sound signature.  The rumble of the bass is deep and textured, with most of the weight shifted more toward sub-bass, though mid-bass punch cuts nicely through the mix as well.  Lower mids are on a leaner side, definitely below neutral.  Upper mids are very clear and detailed, natural in tonality.

The tuning of the mids gives vocals and instruments more transparency and less coloring.  If you like warmer and fuller body mids in your sound, GAEA won’t cut it for you.  But if you are into pop, rock, EDM, this is a perfect tuning.  Treble is also natural, with a moderate level of sparkle and plenty of air.  Treble is not exactly the star of the tuning, but it does complement it, allowing a clear definition of the sound.

The soundstage expansion is also impressive, spreading wide, left to right, and having an oval shape with sound wrapping around and having more width than depth/height.  The imaging actually reaches 3D level with a relatively accurate placement of instruments and vocals in space.  And speaking of instruments and vocals, they are well layered and separated to easily distinguish every detail in the mix.

I would say that the overall tuning of this 5-driver hybrid is quite coherent, but the leaner lower mids create a separation between the bass and the upper mids so you know for sure you are listening to a hybrid design.

Also, it pairs up well with most of the DAPs, especially those with a neutral tonality that is leaning toward a warmer side, giving mids a little fuller body.  I liked GAEA pair up with WM1ZM2 and N8ii output with NuTubes and P+ boost.  But it also sounded great with LPGT, SP2000, and DX320 (especially amp13).

For those who are interested, here is FR measurement of GAEA.

The selection of eartips is crucial to any universal in-ear monitors and will affect the sound, especially the bass impact depending on the seal.  Due to a large opening of my earcanals, I usually go for the largest size eartips to get a better seal.  Also, please keep in mind, eartips impressions are subjective and will be based on anatomy of your ears.  I’m just describing what I’m hearing with mine while comparing it to GAEA stock SpinFit CP100+ eartips.

CP to Azla Crystal – adds a little more body to lower mids, but also pushes the sound more out of my head, projecting it further away.

CP to Final Type-E – adds a little more sparkle to the treble while keeping the rest the same.

CP to Symbio F – adds a little more body to lower mids while keeping the rest the same.

Seems like wide bore eartips are not as friendly with GAEA, at least not to my ears because it changed the soundstage.  If you don’t mind foam eartips, Symbio F had the best synergy to my ears, while Type-E was my second favorite due to additional sparkle in treble. 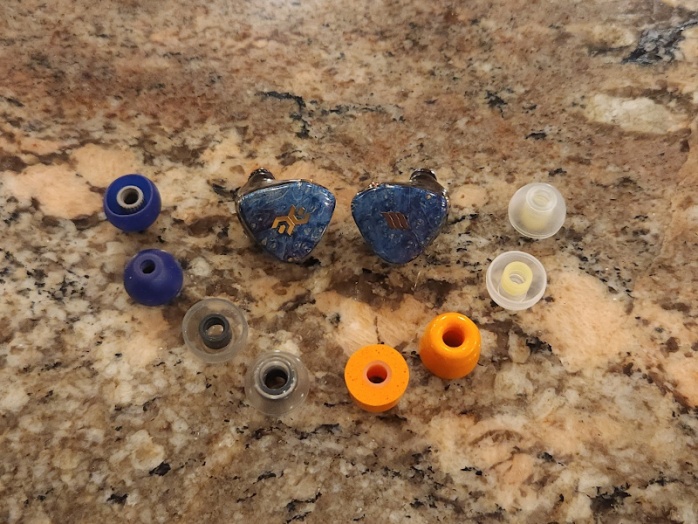 The sound comparison was done using GAEA with a stock cable, stock eartips, and LPGT source; volume matched in every comparison.

GAEA vs Mest MK2 – both have a U-shaped sound signature due to a stronger impact of the bass and elevation of upper frequencies.  In terms of the bass, they both have deep sub-bass rumble, but MK2 mid-bass is more elevated in comparison to GAEA.  Both have leaner lower mids which take away some warmth from the sound.  Then, going into upper mids and treble, you will hear more difference.  GAEA upper mids sound more natural, smoother, and a bit more forward, while Mest MK2 upper mids are brighter and slightly pulled back.  Then, in lower treble they switch, with MK2 having more energetic boost while lower treble of GAEA being less aggressive and smoother.

GAEA vs Trio – this is another hybrid comparison which I think many will be interested to hear about.  With GAEA being more U-shaped and Trio leaning more toward V-shape, they still have similarities of leaner lower mids and more emphasis on low end and upper frequencies.  Trio bass scales up with more elevated sub-bass and mid-bass, while GAEA sub-bass is not too far off, but mid-bass punch is less aggressive and more articulate.  As already mentioned, lower mids in both are lean and pulled back.  Trio upper mids are also not as forward as GAEA which has a more natural detailed upper mids.  Then, Trio scales up with a lot more aggressive and brighter treble, while GAEA keeps it smoother, less aggressive, and more organic. 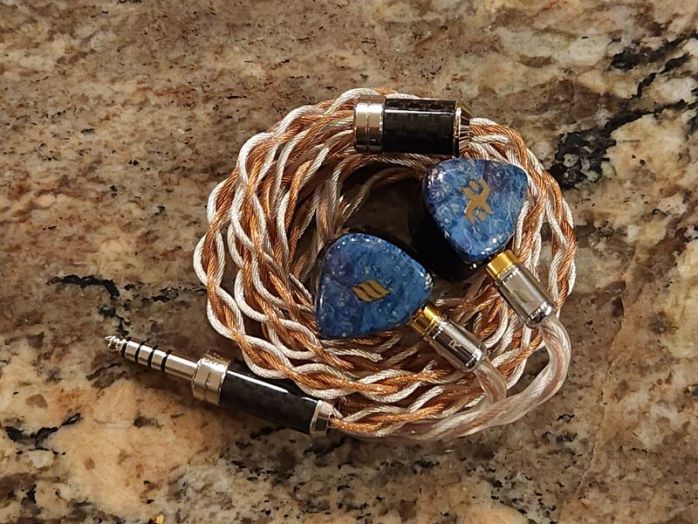 Many audiophiles are so focused on the driver config and the next gen tech, they overlook real gems, even if it just a hybrid with a single DD and 4 BAs.  But at the end of the day, it is still about the tuning rather than a number or a variety of drivers.  Lee, the founder of Elysian Labs, has been known for delivering just that with all of his previous IEMs.  But with a high demand and limited resources, it is not always easy to keep up when you have so much on your plate.  This collab with EA is a big step forward for Elysian Acoustics Labs.  Both companies really came through with beautiful compact shell design, very comfortable fit, and a well-done U-shaped tuning with a textured deep bass, leaner lower mids, clean, detailed, natural upper mids, and natural airy treble, and a very reasonable price.  I hope they will continue their collaboration work so we can see more EA x EA releases.